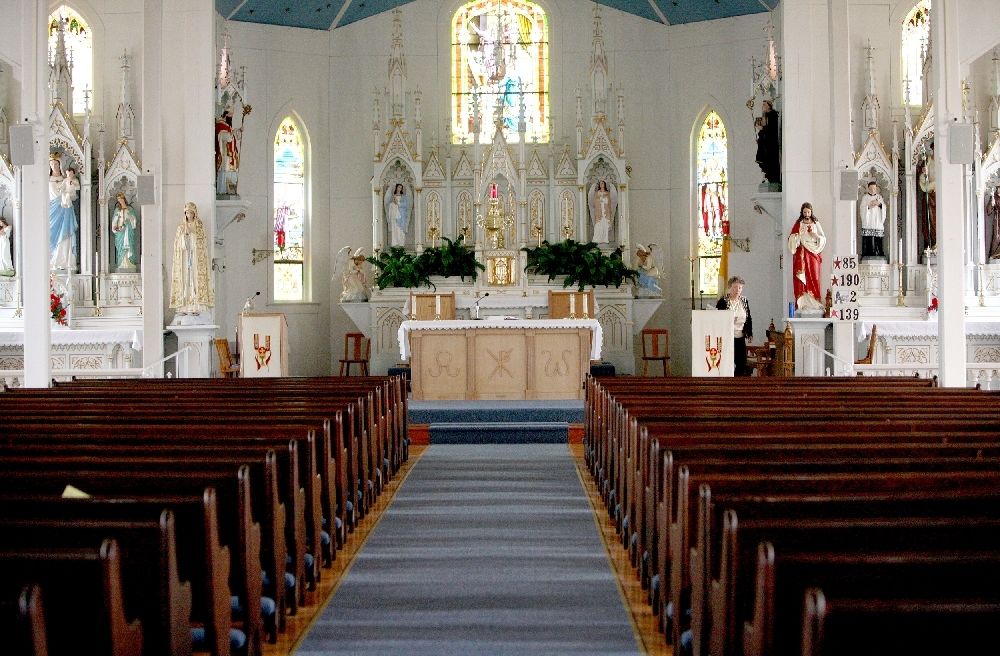 The interior the Church of Visitation in Westphalia is shown on Jan. 15, 2008. 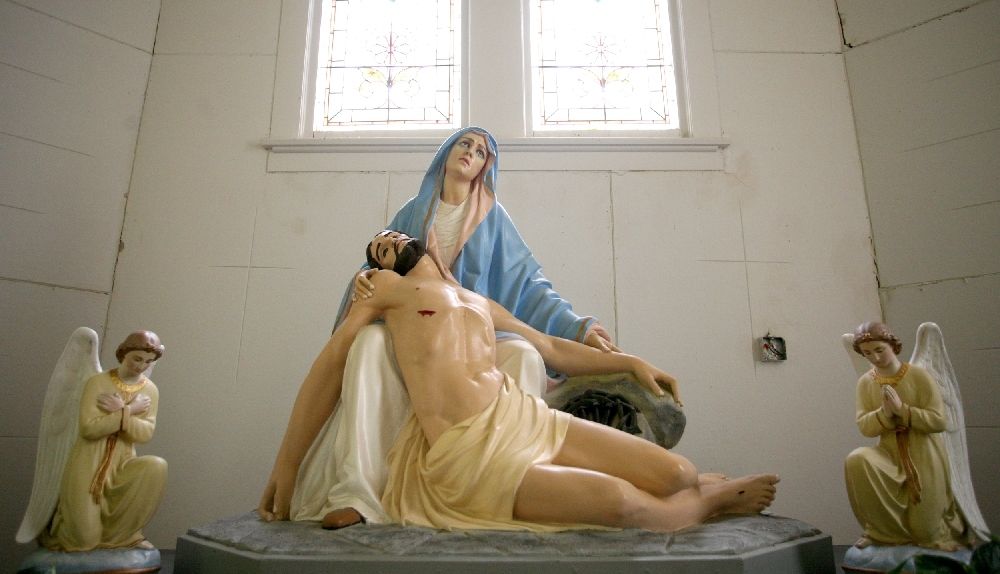 Statues are shown inside the Church of Visitation on Jan. 15, 2008, in Westphalia. 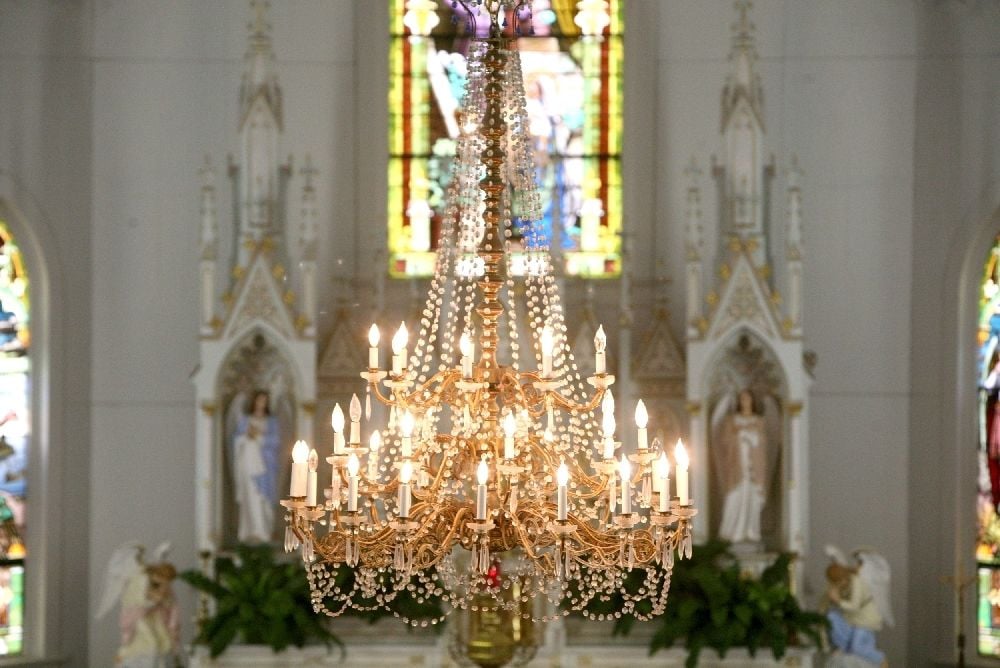 A chandelier is shown Jan. 15, 2008, at the Church of the Visitation in Westphalia. 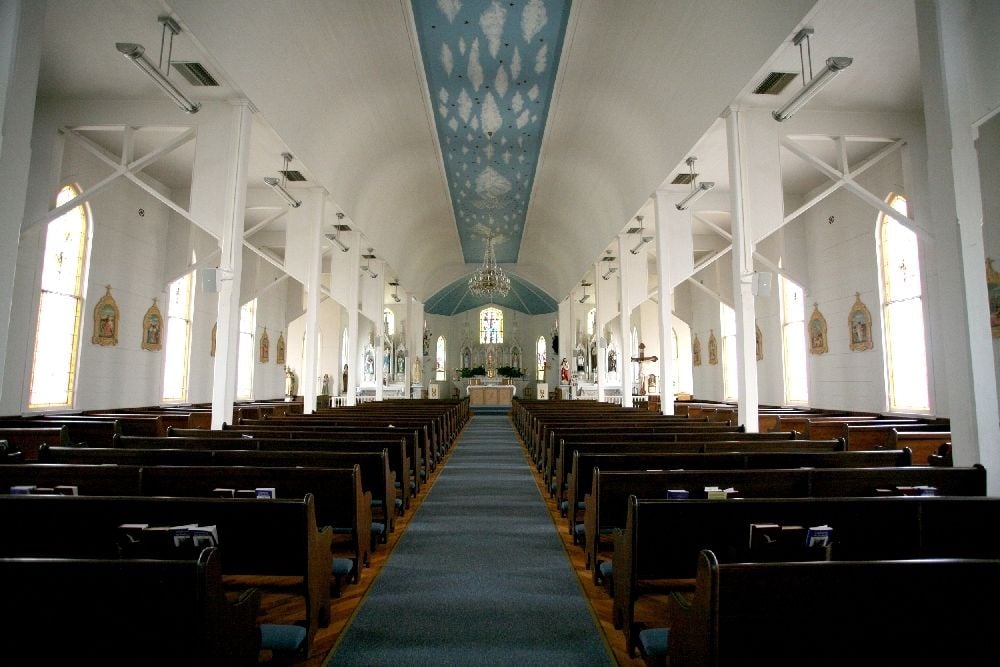 The interior of the Church of Visitation is shown Tuesday, Jan. 15, 2008, in Westphalia.

The interior the Church of Visitation in Westphalia is shown on Jan. 15, 2008.

Statues are shown inside the Church of Visitation on Jan. 15, 2008, in Westphalia.

A chandelier is shown Jan. 15, 2008, at the Church of the Visitation in Westphalia.

The interior of the Church of Visitation is shown Tuesday, Jan. 15, 2008, in Westphalia.

WESTPHALIA — It’s quiet in Westphalia. The tranquility might not be the first thing noticed — that would probably be the church, which rises above the surrounding homes, businesses and school. But eventually, the peacefulness of the community becomes apparent and its in the midst of these quiet surroundings a vibrant church exists.

The Church of the Visitation in Westphalia is so named to pay tribute to the Visitation of the Blessed Virgin — the visit Mary, while pregnant with Jesus, made to her relative Elizabeth, who was pregnant with John the Baptist. This house of worship has thrived in this rural community since it was built in the 1880s. While many rural churches struggle to maintain an active membership, this Catholic church retains its significance and still serves as a gathering place for its parishioners.

Doris Voltin’s ties to the church go back years. “I have grandparents who went to church here and parents who married here,” she said.

Mrs. Voltin was married in the church, as were three of her children. “This church has been just like this ever since I remember,” Mrs. Voltin said.

While the exterior of the Church of the Visitation is impressive with its two bell towers, the interior is the jewel — with its impressive altars, 20 stained glass windows and numerous statues from Germany.

The main altar was purchased for $700. The 11-foot pine pews were hand-planed and joined with screws. The church was completed in February 1895 at a cost of $8,000. The painting on the ceiling of clouds, sky and angels was done in the 1980s in an effort to restore some of the church’s interior back to its original state.

Over the years, the painted surfaces of the altars have been touched up. Mrs. Voltin remembers the uproar during her childhood when an artist added blue and pink casts to the paint in order to heighten the appearance of the statues.

“You would have thought they had chopped the church in half,” she said.

The church’s strength comes from the fact that members believe with the same enthusiasm now as those in the past, Mrs. Voltin said. “It’s a unique church,” she said.

The church sponsors annual activities, like the Westphalia homecoming, that have wide appeal. “We can have a festival the second Sunday in October and sell 6,000 plates of food,” Mrs. Voltin said.

The congregation is made up of about 180 families. There are some young families who grew up here, moved away to attend college and get married, but moved back to raise their families, she said.

On the grounds of the church, a three-room school was constructed in 1896 and operated as a parochial school until 1935, when it was consolidated with the public school. Nuns taught at the church and community schools until the 1980s and a historical society was formed to save the school building and the convent where the nuns lived. There’s a collection of photos of couples who married in the church — dating back to the early 1900s.

The photographs are on display in the school house museum. Hundreds of wedding photos line the walls and are grouped alphabetically.

“We thought initially we’d group them by dates, but then we realized it would be difficult to remember the dates of all these people’s weddings,” she said.

The pictorial review of fashion trends is fascinating, the ornate head pieces of the early 1900s and the big hair of the 1980s.

There is a mannequin depicting the nun who was Mrs. Voltin’s first-grade teacher. The women of the church borrowed a habit from Our Lady of the Lake Convent in San Antonio and made one.

There are old school desks with slates, family christening gowns and signs that bordered the stage at the Westphalia Dance Hall, which no longer exists. The church received official recognition with the erection of an official Texas Historical Marker on Dec. 31, 1978.

On May 15, 1996, the community was recognized as a Rural Historic District. The district is now listed in the National Register of Historic Places. Nearby St. Mary’s Catholic Cemetery, which also has a historical marker, has graves going back to 1884.

Fire destroys Church of the Visitation in Westphalia