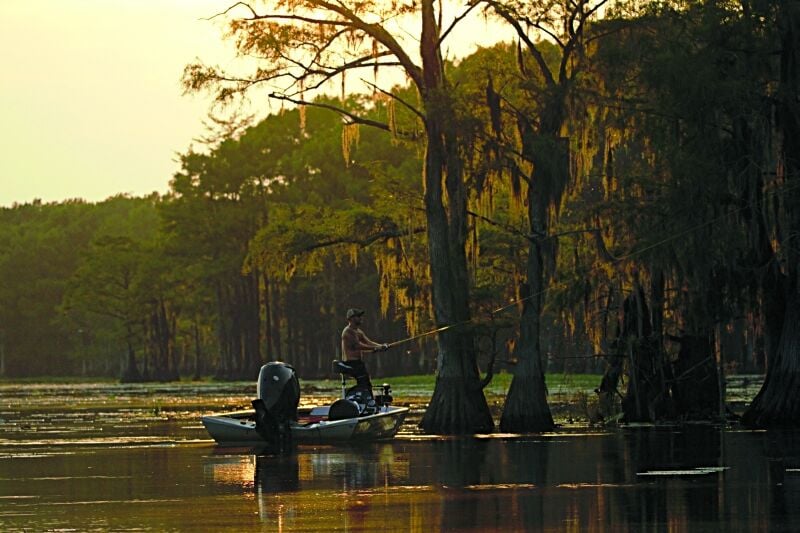 A fisherman waits for a bite while fishing recently on Caddo Lake. 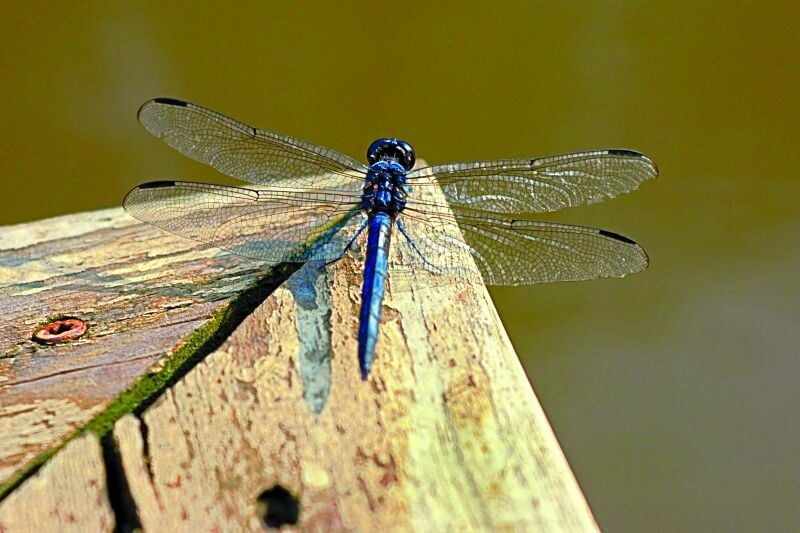 An blue dasher dragonfly basks in the morning sun recently at Caddo Lake. 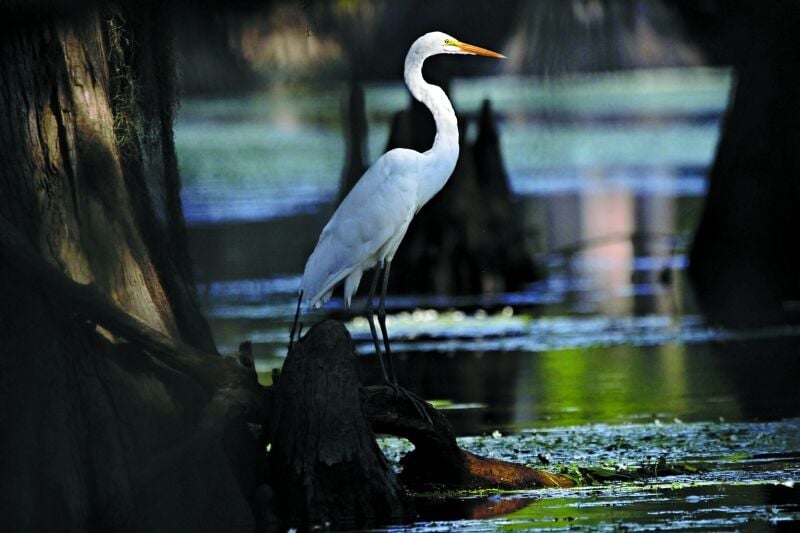 An egret is shown recently at Caddo Lake State Park.

A fisherman waits for a bite while fishing recently on Caddo Lake.

An blue dasher dragonfly basks in the morning sun recently at Caddo Lake.

An egret is shown recently at Caddo Lake State Park.

Sun rises on a midsummer day at Caddo Lake as an early morning fog drifts over the mirror smooth-water while blue dasher dragonflies flit about.

Somewhere off in the distance, you can hear the call of waterfowl. A ripple on the water’s surface in the shadow of Cypress trees promises a good day for would-be anglers.

Caddo Lake in northeastern Texas is the largest and perhaps only natural lake in Texas at nearly 40 square miles with an internationally protected wetland. Its shores straddle Texas and Louisiana.

A trip to the lake was the setting for a recent family vacation — a place where none of us native Texans had ever visited. We stayed at an Airbnb rental right on the water.

The area where the Caddo Indians called home was formed, in part, by the Great Raft, which was a log jam on the Red River as far back as the 12th century that extending for up to 165 miles. Dislodged by the New Madrid Earthquake of 1812, the area eventually flooded a basin to create the lake. According to Caddo folklore the chief and his warriors were away on a hunting trip when the Great Spirit flooded the area because the chief failed to obey him.

Now the boundaries of Caddo Lake are regulated by a dam in Louisiana.

However, lurking in the shadows of the lake is a monster threatening that lush environment. No, it’s not Bigfoot. It is giant salvinia (salvinia molesta), a free-floating aquatic fern native to South America and introduced to the United States by the water garden industry. Since its introduction, giant salvinia has proven to be an aggressive invader that can double in size in four to 10 days under favorable growing conditions, according to the Center for Invasive Species Eradication. Airboats are being utilized to distribute herbicides to control and or eradicate this persistent invader.

Despite the aquatic fern, my brother and I tried our hand fishing. After trying a variety of lures and live bait, we came to realize the fish simply weren’t biting. We opted to grab a bite a nearby restaurant instead.

The restaurant stop led us to book a boat tour of the lake. We contacted a man named Patrick and made arrangements. Ordinarily, the boat tours were an hour long. But we’d agreed to meet at an earlier time than scheduled due to a summer shower. The storm quickly dissipated so there we were out on the water. At which point, Patrick graciously decided to make it a two-hour trip instead so that we could see the spectacular sunset on the bayou. No one objected.

During the tour, we saw many varieties of birds that call the lake home, and one particularly large alligator that regularly hangs out behind Johnson’s Ranch Marina and Bait Shop (the oldest inland marina in Texas) for the scraps they toss at the end of the day.

There are an estimated 3,000 alligators in the area — a fact I tried to ignore the next day when I took my kayak out on the lake.

As you go down the wooden plank walkway past Johnson’s Ranch to the piers beyond, across the way you will find the “infamous” Dick and Charlie’s Tea Room. Now a private residence, it was originally used as a speakeasy back from 1919-1933 during Prohibition due to its location just over the county line.

Marion County, on the west side of the water and the location of the town of Uncertain, was dry. Right across the lake in Harrison County, however, alcohol was allowed. Locals would take row boats from Johnson’s Ranch to Dick and Charlie’s for drinks and dancing.

A sign nailed to a Cypress tree out front explained the rules: “House Rules: 1. There ain’t none. 2. There never was none. 3. There ain’t never gonna be none.” Apparently, Dick and Charlie put it pretty plain language.

The day after our pontoon boat tour of the lake, I took to the water in a somewhat smaller craft — my kayak, which I had brought from Temple in the hopes of paddling the lake.

I floated in my 8-foot craft over glassy waters so thick with sediment that you could only see a few inches deep.

My thoughts couldn’t help but stray back to the 15-foot alligator I’d seen the day before just a few miles away. Although the park ranger assured me that the American alligator is among the least aggressive of the crocodilians, he told me about the thousands of alligators who inhabit the area.

As an outdoor enthusiast and wildlife photographer, I was actually a little disappointed not to encounter another perhaps smaller alligator. But in spite of a few nervous moments when I scraped over some submerged root or cypress knee, no more gators were to be seen.

I did get some more nice shots of egrets fishing in the shallows, however.

Boat traffic on the lake dates back centuries.

In the 1800s, for example, the cities of Port Caddo, Swanson’s Landing, and Jefferson in Texas, and Mooringsport in Louisiana, had thriving riverboat ports on the lake.

Gradually, as the log jams were removed in the lake and on the Red River by Capt. Henry Miller Shreve and then by the Army Corps of Engineers, the lake changed shape and eventually fell over 10 feet — destroying the East Texas ports and their riverboat industry.

Industry once again came to Caddo Lake with the discovery of oil beneath it.

In the early l900s, 27-year-old Walter B. Pyron of Blossom, Texas, a production foreman for Guffy Oil Co., noticed gas bubbles rising from the lake. He and other Guffy employees rowed across the lake, lighting strings of the bubbles. Confident that oil and gas lay beneath the lake, Pyron wrote to his superiors recommending that 8,000 acres on the bottom of the lake be leased at an auction being held by the federal government at Mooringsport, Louisiana, near Ferry Lake, the Louisiana side of Caddo Lake.

He told them he was sure his men were capable of drilling and completing a well in the lake, using crude tools and wood timbers.

Fifteen minutes before the auction, he still had no answer, but Pyron found a crank-style telephone and talked to his superiors at Gulf Oil Corp. — the successor of Guffy Petroleum Co. — in Pittsburgh. They were dubious, but Pyron was persistent, and time was passing.

A minute and a half before noon — the time set for the bidding — Pyron won Gulf’s approval and raced to the auction site. He was just in time and bid on the lake bottom for $30,000 down and $70,000 in royalty agreements.

The world’s first over-water oil platform was completed in Caddo Lake in 1911. The Ferry Lake No. 1 was erected by Gulf Refining Co. The well bottomed at 2,185 feet and produced about 450 barrels per day.

Oil derricks sprang up throughout the lake, in the early part of the 20th century, further damaging the fragile ecosystem. The oil industry eventually left Caddo for richer fields at Kilgore and other locations.

Texas tried to preserve parts of Caddo in 1934 by establishing a state park, constructed by the Civilian Conservation Corps.

However, the establishment of the Longhorn Army Ammunition Plant on the shores of Caddo, in the mid-20th century, polluted large portions of the surrounding wetlands until its closure in the 1990s.

Most of the former plant site is now a federal wildlife refuge.

The story of Caddo Lake — from its shores to murky depths — is as rich and diverse as the ecology itself.

Whether taking a tour by pontoon or air boat, going fishing or birding, hiking the local trails, kayaking as I did, or just seeing the sights by car, it’s well worth the trip.