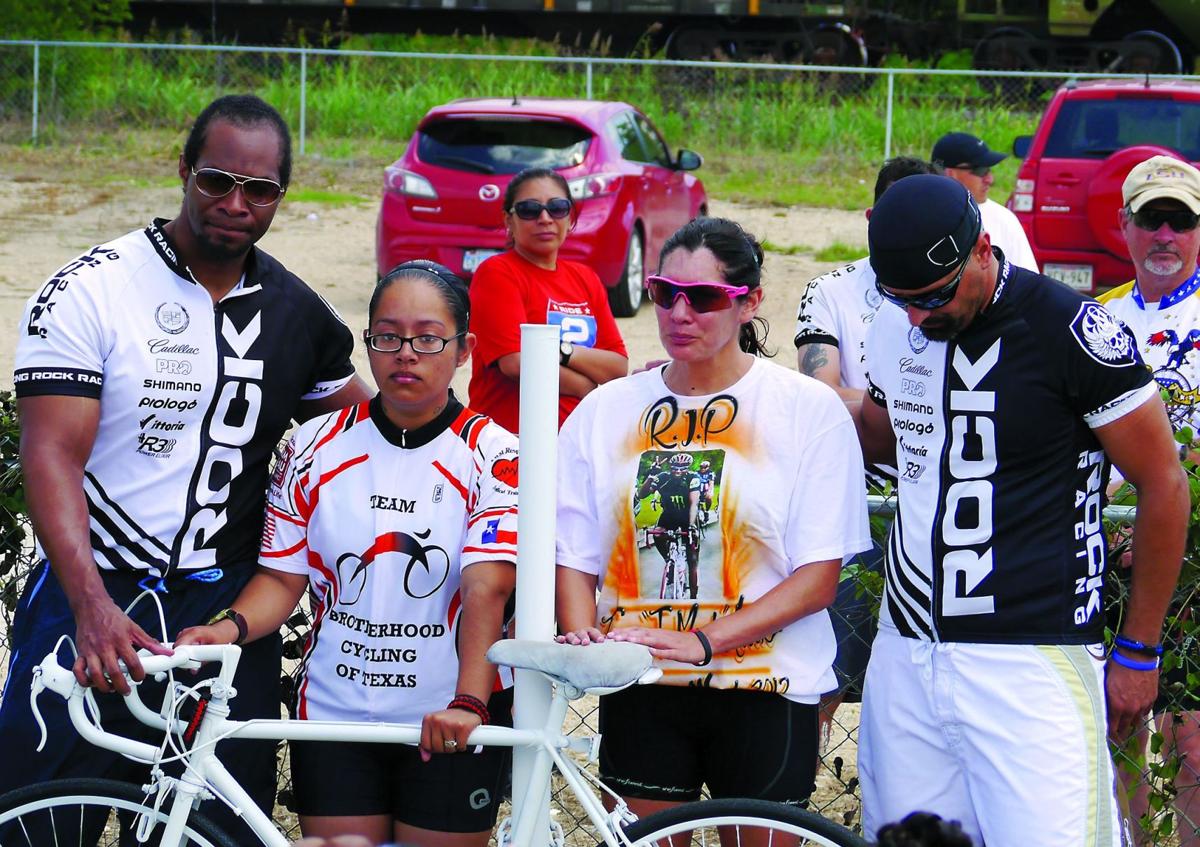 Left to right, John Colbert Jr.; Terre Mack’s wife, Issie Mack; Tammy Roen and Gorge Solis visit the white “ghost bike” that has been set up as a memorial to cyclist Terre Mack who was killed by a motorist at the site along the access road to State Highway 190 in Nolanville. 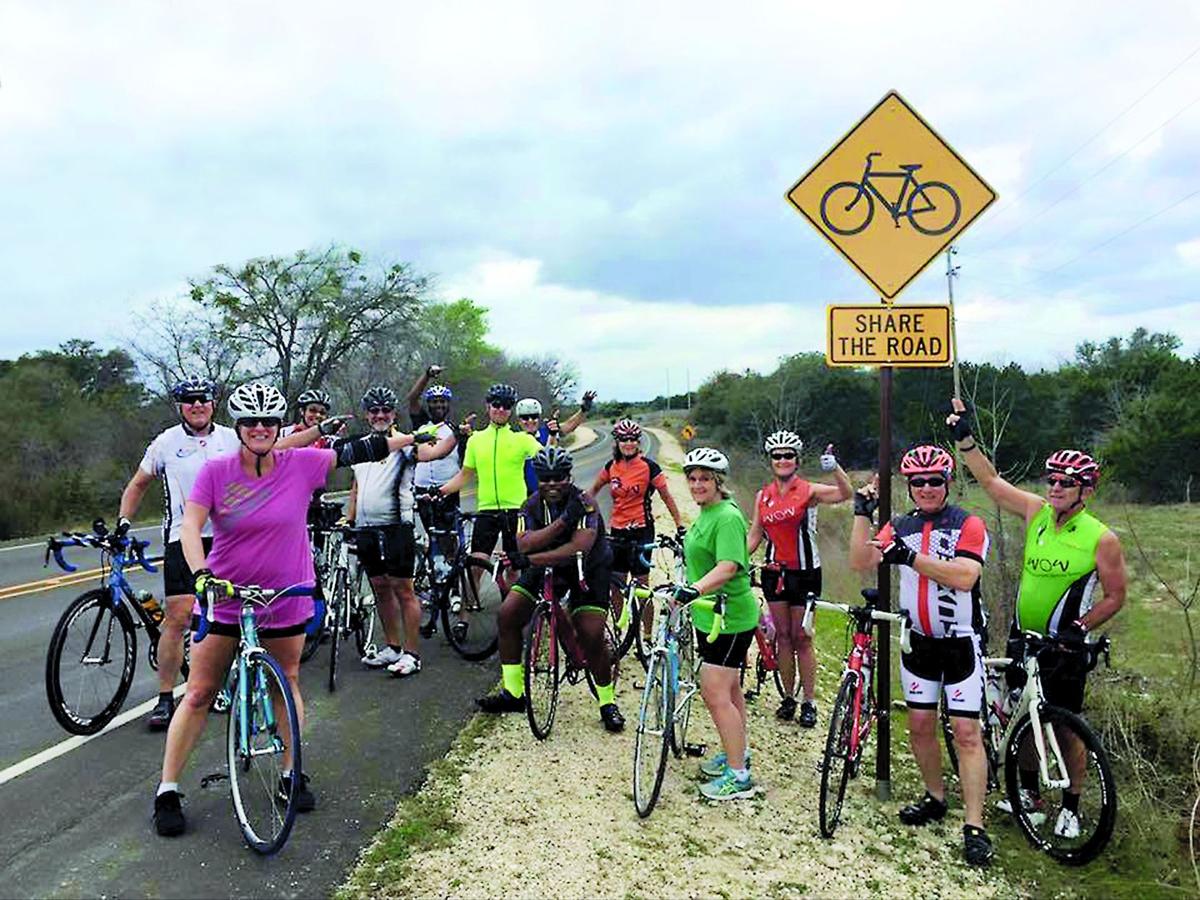 Riders with the Women on Wheels (WOW) cycling group gather in front of a sign telling motorists and cyclists to share the road. 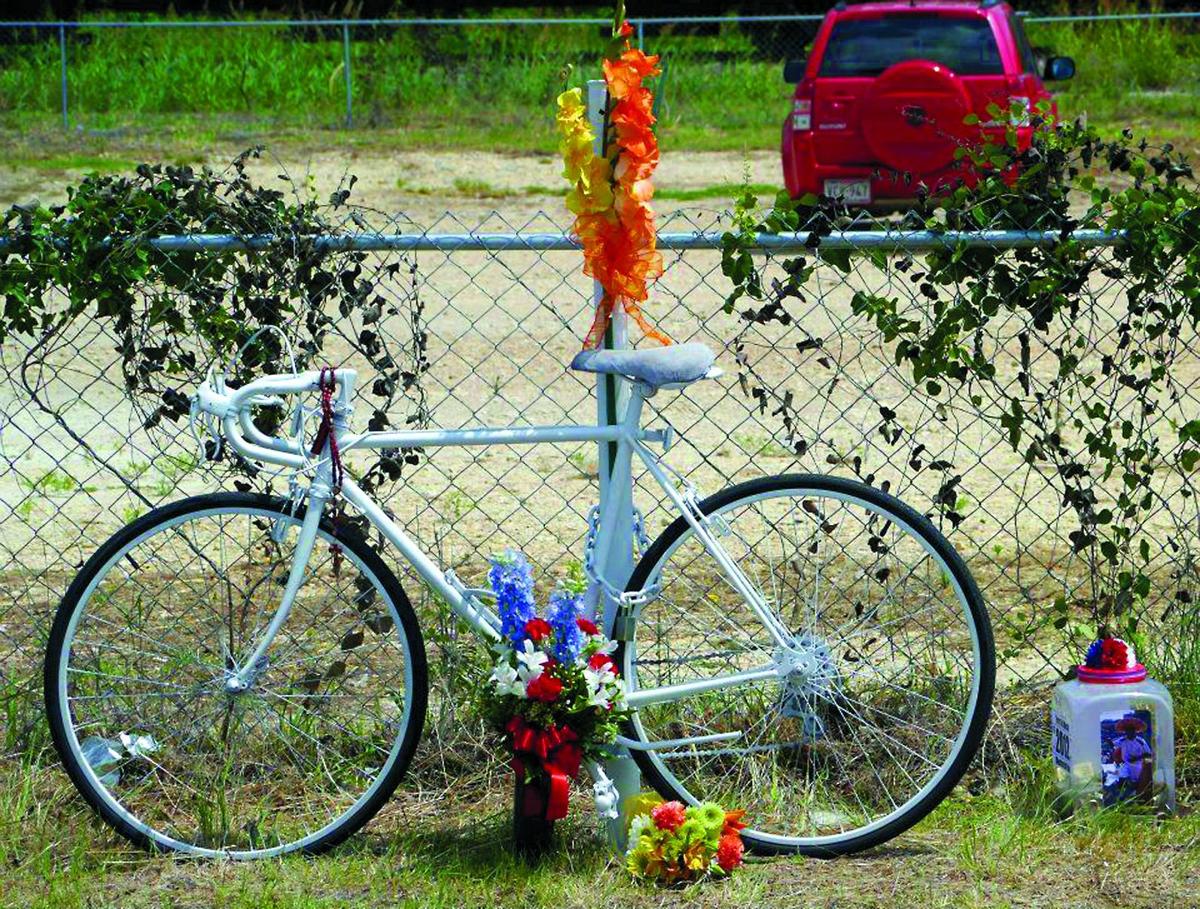 The white “ghost bike” has been set up as a memorial to cyclist Terre Mack, who was killed by a motorist at the site along the access road to State Highway 190 in Nolanville.

Left to right, John Colbert Jr.; Terre Mack’s wife, Issie Mack; Tammy Roen and Gorge Solis visit the white “ghost bike” that has been set up as a memorial to cyclist Terre Mack who was killed by a motorist at the site along the access road to State Highway 190 in Nolanville.

Riders with the Women on Wheels (WOW) cycling group gather in front of a sign telling motorists and cyclists to share the road.

The white “ghost bike” has been set up as a memorial to cyclist Terre Mack, who was killed by a motorist at the site along the access road to State Highway 190 in Nolanville.

Tammy Roen’s voice shakes as she recalls the day her good friend died May 1, 2012.

“I’ve never been the same,” she said.

On Wednesday, she will join other cyclists throughout the nation in a Ride of Silence to honor cyclists who have been killed or injured while cycling on public roadways.

Roen and her friends, John Colbert Jr. and Gorge Solis recalled the ride when their friend, Terre Mack, was hit by a truck while riding his bicycle in the late afternoon along the frontage road of State Highway 190 near Nolanville.

They had left Harker Heights and were about five miles into their regular 20-mile round trip toward Belton when Mack began complaining that his knee hurt, Colbert said.

Mack, who was 47, told the other riders to go on ahead without him.

Refusing to leave each others’ sides, all four riders turned around under the overpass near Patty Hamilton Road and headed west on the access road back to their starting point.

They passed a four-way stop by the Nolanville police station and were about three miles away from the parking lot where they had left their cars when Colbert checked his mirrors.

He called out to the others to move to the right as cars approached.

Colbert said he was to the far left with Mack to his right. Roen was to the right of Mack and Solis was riding in front of her, he said.

Colbert said he called out to his riders several times as a pickup truck was approaching fast down the hill.

The truck wasn’t slowing down, he recalled. He wasn’t changing lanes and there wasn’t room to move to the right, he said.

So Colbert pulled to the left. He said the truck came barreling between him and Roen and hit Mack.

“He kept going until he finally applied his breaks,” Colbert said. “Mack was killed instantly. It was so surreal and shocking. I couldn’t believe it.”

Solis said he saw Mack’s body on the hood, his bicycle under the truck.

“It’s a miracle he didn’t kill us all,” he said. “The truck plowed right through us.”

“He wasn’t paying attention,” said Colbert, 37, who lives in Killeen. “We were riding in a pack. You couldn’t miss us.”

Solis, 44, also of Killeen, said they were wearing bright colors and it was bright daylight.

He said he doesn’t know what happened to the truck driver, who wasn’t charged for the accident.

It took a while before Mack’s friends could get back on their bikes.

Solis, who used to ride three or four times a week, said he rarely rides now. When he does, it’s just around the post at Fort Hood.

“That day changed me,” Solis said.

Colbert and Roen said they had to get back on their bikes, for their friend, Mack.

“He would’ve wanted us to keep doing what we love,” Colbert said.

They also want to make motorists aware that cyclists have legal rights to the roads, too.

The motoring public often isn’t aware of these rights and sometimes not aware of the cyclists themselves, Roen said.

“I’ve often heard motorists comment that we belong on the sidewalk when in reality we have the right to be on the road just as they do,” she said.

Solis said he and other cyclists have been harassed by motorists, driving too close and yelling at them.

“They think because we’re not in a car we don’t matter,” he said. “But we have rights to the road just like they do. There are more cyclists than ever and everyone needs to watch better.”

Cyclists will gather at 6:30 p.m. Wednesday at Lions Junction Park in Temple to start the two-mile solemn slow ride at 7 p.m. to remember those cyclists who have been killed due to a bicycle/motorist crash.

The first Ride of Silence was organized by Chris Phelan in 2003 in Dallas after endurance cyclist Larry Schwartz was hit by the mirror of a passing bus and was killed.

In addition to Mack, other local riders to be honored during the silent ride include Dr. Alan B. Follender, who was killed on Taylor Valley Road in 2000 and George Thomas (2011) and Dave Jones, both killed on State Highway 2410 in Salado .

Colbert said motorists need to slow down and be more aware of cyclists on the road.

“Too many accidents happen because motorists are impatient and inconsiderate,” he said. “Too often cyclists are looked upon as an inconvenience when in reality it doesn’t take but a few seconds to slow down and move over.”

As a motorist, Colbert said he often turns on his flashers as he approaches cyclists to urge others around him to slow down.

Roen, 40, a certified occupational therapy assistant from Harker Heights who works in area schools, trains for triathlons and has been cycling since 2008 with such area groups that include Women on Wheels, Texas Roadkill and Team Red White and Blue, Team Army and Eagle Cycling.

She said she and her friends are adamant about wearing helmets and following the rules.

“All we ask is that motorists give us a wide berth of at least three feet, slow down and be aware of cyclists,” she said. “We follow the rules and we ask that everyone shares the road.”

Roen said more road awareness is needed as an increasing number of cyclists take to the road for fitness and for leisure.

“Cycling is low impact, easier on the knees and joints,” Roen said. “The sport is growing.”

Cycling is also becoming a method of choice for some commuters who are looking for a more economical and environmental mode of transportation.

Colbert said as fuel costs increase, he foresees more people of all ages turning to the bicycle as a way to maneuver through their communities to pick up groceries and even go to work.

He said he hopes more city planners take the cyclist into consideration to incorporate more bike lanes, smooth pavements and road signage into their infrastructure.

“The number of cyclists is increasing tremendously and we don’t want them to be fearful of the road; we want to be safe,” he said.

Mack, who had retired from the U.S. Military, began cycling less than a year before his accident. He had helped form a cycling group that became known as Team Brotherhood.

“He would call me sometime two times a day and we’d go riding,” Solis said. “He was a big part of my life.”

Mack took to his bike not only to exercise but to socialize and form community awareness, Colbert said.

“We lived on the same block,” he said. “He was always out talking to neighbors and helping with block parties. He made sure we didn’t just come home and pull the garage door down behind us. He was family and community oriented. And he found camaraderie in cycling.”

Before his death, they must have ridden the path from Harker Heights to Belton and back hundreds of time. It was familiar to them.

They don’t ride that route anymore.

“But we hope what happened there is never forgotten,” Roen said. “We hope it makes everyone more aware of the need to share the road.”

Colbert, Solis and Roen said they often stop by a memorial that has been set up at the site of the accident where a white “ghost bike” has been erected. All of Mack’s friends and even cyclists who never knew him come by to place flowers by the bike.

On Wednesday’s Ride of Silence, Colbert said he plans to wear the same red and black jersey he wore on his last ride with Mack.

“We continue to ride, to keep our friend’s spirit alive,” he said.