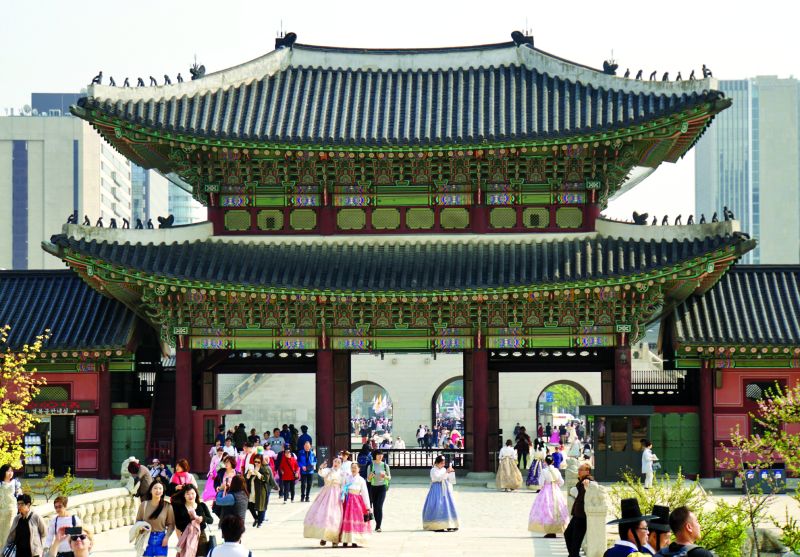 The ornate side of the Gwanghwamun Gate is shown at Gyeongbokgung Palace in Seoul. 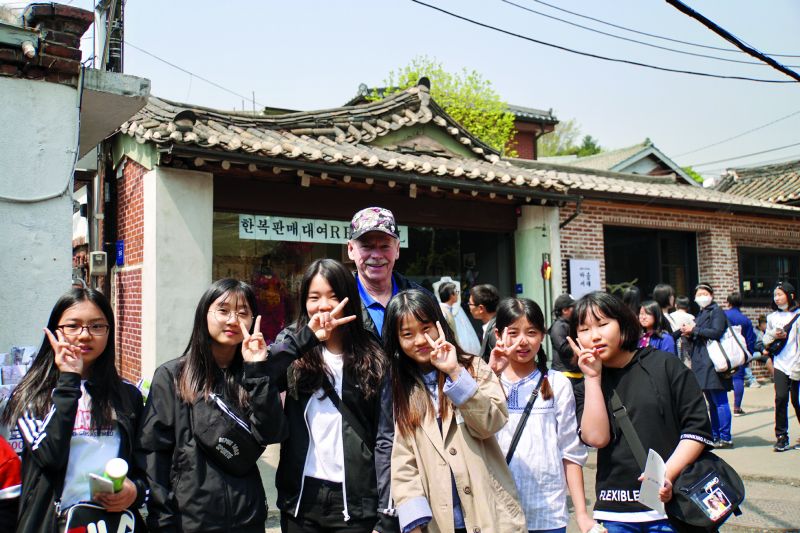 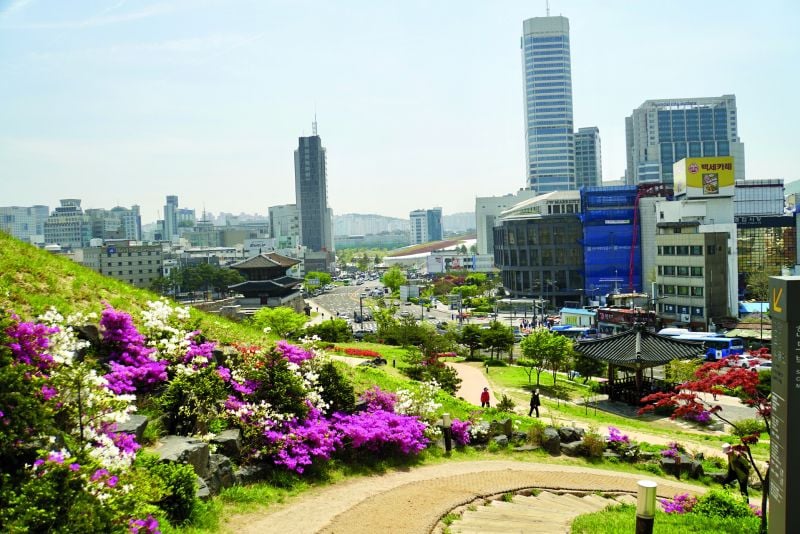 The East Gate, and futuristic DDP building, are shown from a hillside along the city wall in the Dongdaemun district of Seoul.

The ornate side of the Gwanghwamun Gate is shown at Gyeongbokgung Palace in Seoul.

The East Gate, and futuristic DDP building, are shown from a hillside along the city wall in the Dongdaemun district of Seoul.

Editor’s note: This story is one in series by Dr. Robert Burke, a local doctor who is sharing his experiences from a recent trip to Asia.

“Really, you want to go to South Korea?”, Bonnie, my wife, asked incredulously. My response was affirmative, noting that it lies between Japan and China, our other two destinations in Asia. Of course, it was exactly that geopolitical concern underlying her angst. We had five days to wait between organized tours in Japan and China. North Korea is not open to tourists, and a visit to the DMZ (“de-militarized zone,” which is ironically a highly militarized two-miles-wide buffer zone along the entire border between the North and South) may be dangerous. Language barriers would prevent a rural adventure. Thus, we planned for a limited, self-guided tour of South Korea, aided by the internet and books on Seoul and its top sites.

South Korea is one of the most densely populated countries on earth. About 85 percent of its 51 million people live in urban areas. Most of its 11 million visitors come from Asia; only 650,000 come from the United States. The 2018 Winter Olympics spurred more recent interest in this country and opened a political door for diplomacy between the North and South, separated since 1948. North Korea, backed by China and Russia, had attacked South Korea in 1950. The US and other UN forces supported the South. Consequently, the country was widely destroyed before an armistice was signed in 1953. A peace treaty has never been signed, so the two Koreas remain technically at war. South Korea is now a liberal democracy and economic “powerhouse,” whereas the north remains impoverished under dictatorial rule.

Incheon airport, on the outskirts of Seoul, is one of the largest, most modern and logically designed airports in the world. As an international hub, it links Asia to the rest of the world. Signs for foreigners enabled an efficient fifteen-minute process through customs. Walkways above the baggage claim areas allowed quick unencumbered access to our waiting luggage, despite a lot of arrivals. Ground transportation was easily arranged. We chose the limousine bus ride to our hotel, since a much more expensive taxi would not get there any sooner. The traffic congestion made this a ninety-minute ride. The metro could have saved us twenty minutes, but we had too much luggage for that mode. For convenience, we also purchased a money pass at the airport to use on buses, in taxis, at convenience stores, and on the subway. Our hotel was located at the base of Namsan Peak, one of four guardian mountains around Seoul. A nice short but steep hike there from the hotel gave us an excellent place to view sunsets. Our hotel was also a convenient location to other attractions.

Seoul is easy to navigate by cab, bus, or metro. Traffic is not pedestrian friendly. However, the people are. Most Koreans do not speak English, but many of the young Koreans engaged us to say a few English words such as “hi” and “where are you from”. They also helped to guide us to where we wanted to go. At a restaurant for locals in the Palace quarter, several friendly young adults helped us to review the menu and order. Cab drivers needed a written note, provided by the hotel concierge, or photo of our destinations.

Seoul, the 600-year-old capital, is a bustling city that blends the modern and old. The Bukchon Hanok Village does this well and is a popular place to visit traditional residential architecture and artisans. Some of these old buildings remain private homes, but many have become cafes, tearooms, or galleries. A relaxed stroll through this village contrasted sharply with the pace of the surrounding modernized city. We also enjoyed the park-like grounds of the Education Museum and the Prime Minister’s residence, as well as views of the surrounding hills. From there we entered the Gyeongbokgung Palace grounds. Originally built in 1394, but much destroyed by the Japanese invasions, it is a beautifully restored complex of pavilions, complex halls, and buildings with Buddhist décor. At the main entrance is the impressive Gwanghwamun Gate, flanked by enormous mythical lion-like creatures. This “palace of shining happiness” was once a royal residence and housed officials, scholars, soldiers, and others.

Our favorite activity was to hike or take the cable car to Namsan Park, located at the geographic center of Seoul. There is an observation deck at the North Seoul Tower, which provides panoramic views of the city. Here lie the signal beacons (Bongsudae) that were once used to communicate invasion or other threats to the city for over 500 years. These are ceremoniously lit daily. A forest surrounds this site, and many hiking trails are provided, the longest of which is about 4-5 miles. Perhaps the most beautiful trail is the ecological trail, with its wildflowers, ponds, flower gardens and relaxation areas along a wide and comfortable rubberized walkway lined by cherry and maple trees. In the area above the National Korean Theater, there is also an outdoor gym with nice views of the city. Some trails follow the ancient city wall that divided the four surrounding mountains to safeguard against invasion. There are many areas along the wall that reflect the different styles of laying stone over the centuries. The four main gates of the wall to the city, built in 1396 have also been restored. They are the East, West, South, and North gates, named respectively in (benevolence), ui (rightiousness), ye (propriety), and ji (wisdom) to reflect Confucian virtues.

Near the South gate is the Namdaemun market, a short walk from the Millennium Seoul Hilton. This place comes alive in late afternoon and offers almost any type of goods, as well as dozens of street food vendors. Here is where we first tasted authentic Korean cuisine. Perhaps the most fascinating area “in all of Korea” is the Dongdaemun. This district blends the ultra-modern with the historic. We took the metro from Seoul Station and arrived at the East Gate, where we walked along the wall to the top of that hill to get panoramic views of this part of the city. The market here is fabulous, where locals sell everything imaginable from clothes to house supplies and materials, plants, pharmaceuticals, souvenirs, and food. This market literally runs dozens of blocks in each direction, and it has alley ways of food vendors and covered yet open restaurants. A “river walk”, the Cheonggyecheon, lies below the street level and divides the market district. It is a nice respite from the crowds. The Dongdaemun design plaza and park (DDP) is a silver futuristic-looking building with streamlined free-flowing curves, with galleries, design studios, and has a flea market vendors area. The Dongdaemun History and Culture park is attached and has museums that highlight previous uses of this area, including a 16th-century military camp and baseball stadium. Back at the Seoul Station, we emerged into the middle of a peaceful demonstration that was in support of keeping the USA here as a safeguard against future invasion from North Korea. Protestors did not want USA departure to be a part of peace negotiations, for which they also were supportive and hopeful.

Unfortunately, our stay in this beautiful city was too short. By the way, most streets are lined with trees and flowering shrubs. Someday, it would be nice to visit Seoul’s Bukhansan National Park and a unified Korea, to see the rural areas and mountains of the north as well.

Dr. Robert E. Burke, a local author and retired pediatrician, has announces the publication of “Passage Into Asia,” the sixth book in his “Buddy the Globetrotter” series of travel tales.