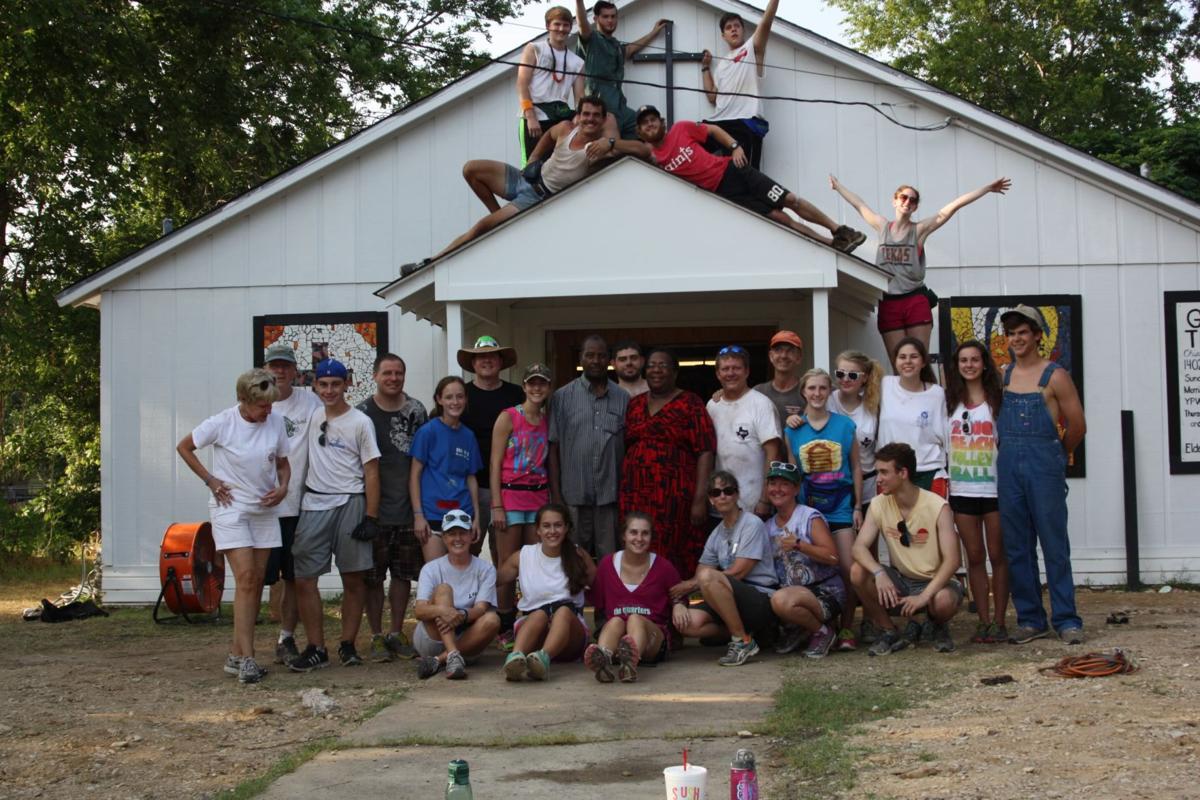 Youth group members from Memorial Drive United Methodist Church in Houston pose for a photo during a previous Workcamp mission trip in Cameron. 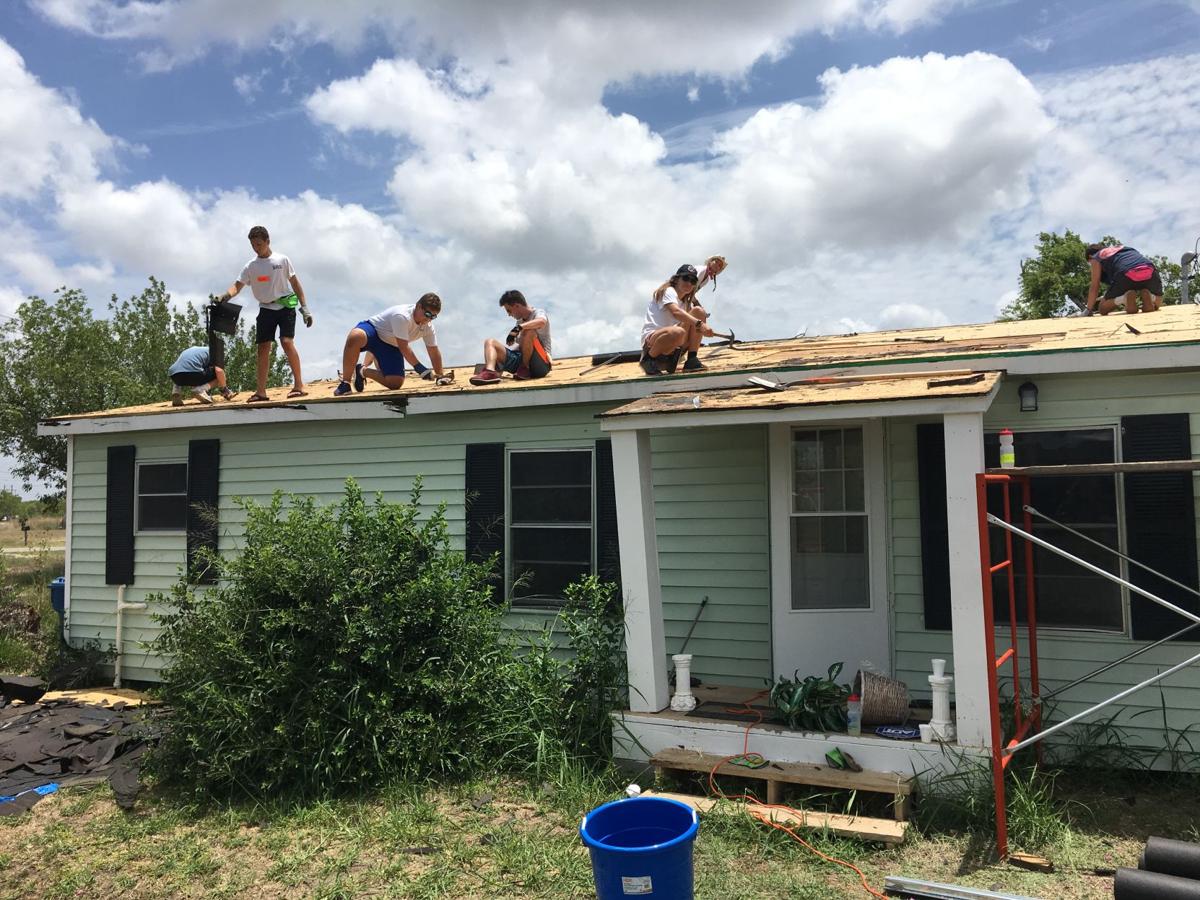 Members of a youth group from Memorial Drive United Methodist Church of Houston work on top of a roof during a previous summer mission trip. The Workcamp summer mission program gives students an opportunity to serve others less fortunate than themselves.

Youth group members from Memorial Drive United Methodist Church in Houston pose for a photo during a previous Workcamp mission trip in Cameron.

Members of a youth group from Memorial Drive United Methodist Church of Houston work on top of a roof during a previous summer mission trip. The Workcamp summer mission program gives students an opportunity to serve others less fortunate than themselves.

A Houston-based church will bring a caravan of high school students, staff and volunteers to Cameron for a week-long mission trip of service and ministry.

He said they plan to bring nearly 170 high school students, plus about 30 college students, the entire youth ministry staff, some of the clergy and a bunch of adult volunteers – altogether, more than 250 people.

“And so we basically descend upon a small town for a week, and we do some incredible service projects,” Bogart said.

He said the team has some wonderful parents and folks on the staff who have experience in construction, so they’ll be undertaking big projects around the city.

“We do roofing, we do painting, we do carpentry, we do all kinds of stuff,” he said.

The group will arrive Sunday and set up base camp at C.H. Yoe High School, where they will sleep and eat. Bogart said Principal Brian Stork and his entire staff could not have been more accommodating.

The next morning, everyone will wake up and do it all over again. They will follow the same schedule each day through Thursday. Bogart said they plan to spend Friday at a local park hanging out and playing games, then head home on Saturday.

In order to get everyone from Houston to Cameron, Bogart said they will travel with at least five buses, eight or nine vans, a huge Penske box truck and several trailers full of tools and equipment for the worksites.

“We are a full on caravan,” he said. “The people of Cameron and probably the people of Temple will notice when we arrive. There’s no doubt about that, because we bring about 250 – 275 people.”

The students and leaders will break up into teams to tackle the various projects around town. Bogart said the worksites will include Cameron Grove Baptist Church, Mt. Zion Baptist Church, Amazing Grace thrift shop in Buckholts, True Love church community and several individual homes. The “jungle crew” will also do some work for the city cleaning out an overgrown wooded area.

“It is quite an undertaking,” Bogart said.

The church has done Workcamps in cities all over Texas including Brady, Jacksonville, Refugio, Crockett, Henderson, Boerne, Gilmer, Kingsville, Fairfield, Palestine and Lufkin.

“What’s really cool is this is actually the fourth time we’ll be in Cameron,” Bogart said.

“So we’re really thankful that the community of Cameron continues to welcome us back,” he said. “I guess we’re going something right.”

Bogart said they’ll be working on at least three projects they’ve worked on before. He said they decided to return to Cameron this year because they hadn’t been in a while and knew there was plenty of need.

“It’s close enough to Houston to get there in a couple of hours – two and a half hours or so – and we know that we can do great work,” he said. “So we know the city of Cameron loves us and we certainly love them, so we are more than happy to come back.”

Andrew Choi, an adult volunteer, has been part of one of the previous Cameron Workcamps. He was on a crew that renovated Mt. Zion Baptist Church from the inside out, and was also on the garbage crew that helped pick up trash at each worksite.

“I was one of many small cogs in the machine, so there were plenty more, but that was what I did,” Choi said.

He said this time around they will be going back to familiar spots that need renovation because of the wear and tear of time.

In addition to providing help around Cameron, Choi said the Workcamp also allows the students and their peers to thrive as a community.

“We just get to know each other more and grow closer together,” he said.

Bogart said the students will get experience of what it’s really like to help people in need and to love their neighbor.

“I really like the idea of our students going out and serving folks that they don’t know and how important that is, not just the mission of the church, but to the mission of Jesus,” he said. “And that in serving our neighbors, even folks that are strangers – folks that we don’t know – they’re going to build some incredible relationships with the people of Cameron, with the people we’re serving, certainly with one another. And so what they’re going to get out of it is an unforgettable opportunity in cherished memories to really have put some time aside of their summer to serve people that need some help.”