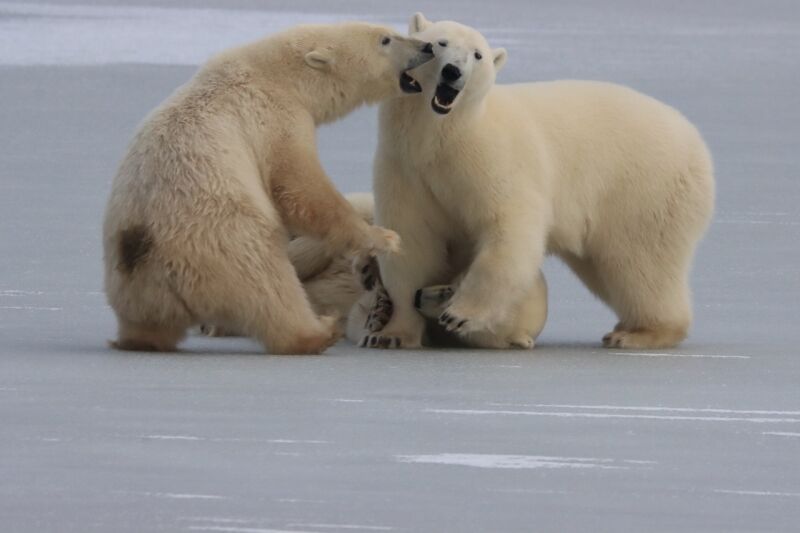 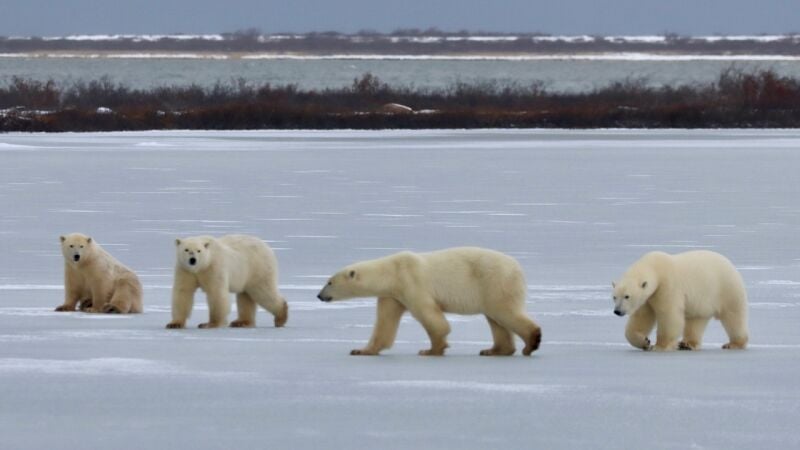 An adult female moves on by three playful sub-adult polar bears on a pond in the tundra in Churchill, Canada. 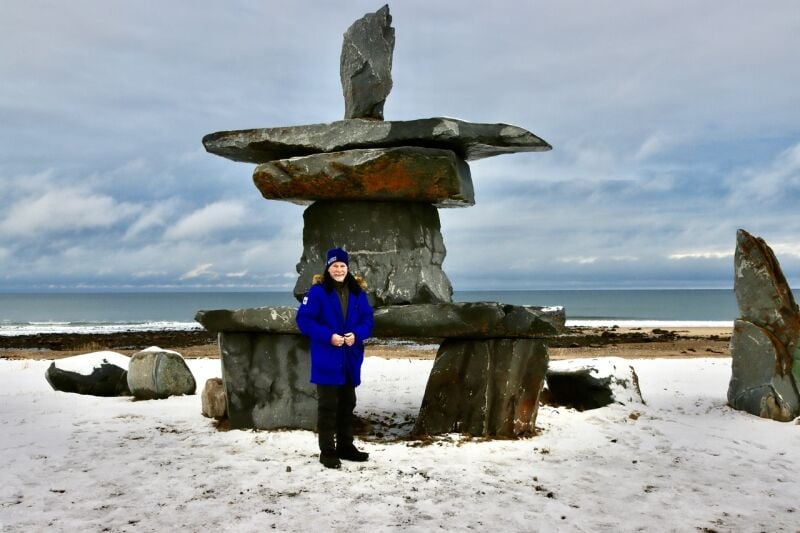 Dr. Robert Burke stands in front of the Inuksuk along the Hudson Bay at Churchill, Manitoba, Canada. This cairn is a symbol of friendship, hope, and safety. 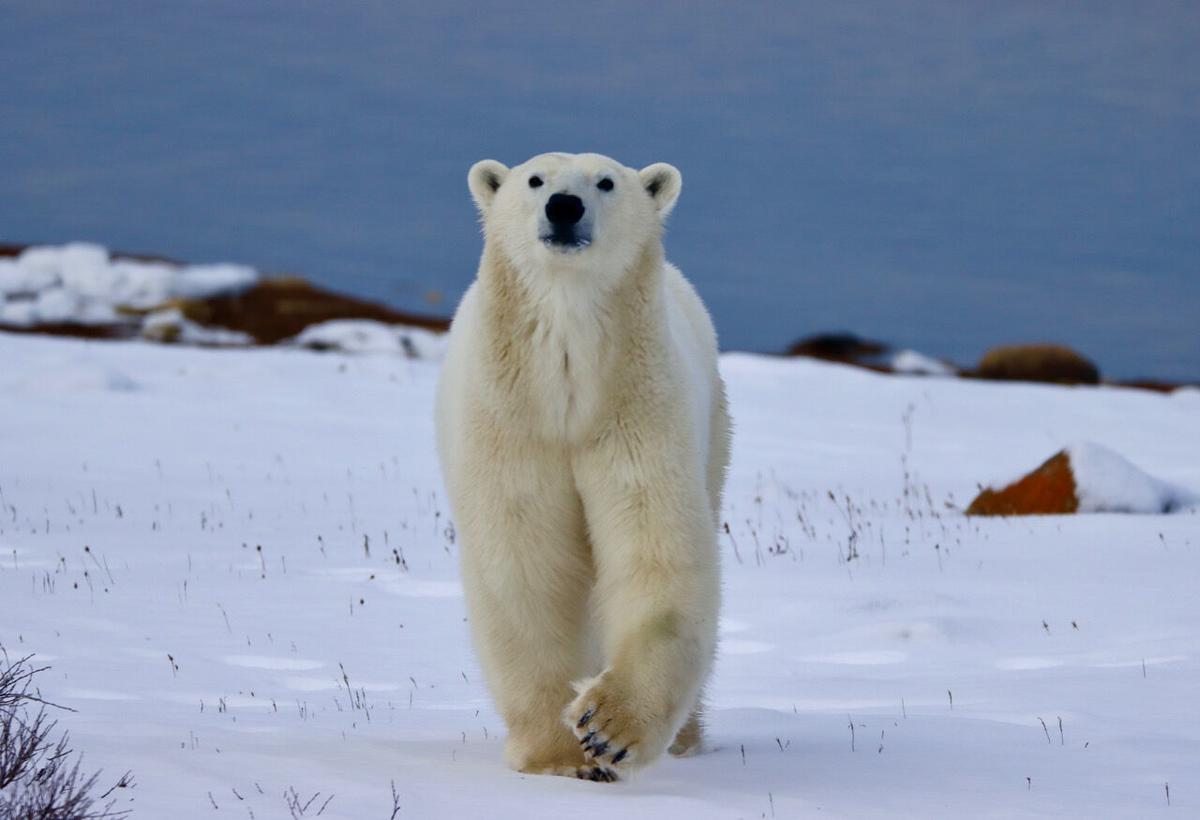 An adult polar bear, the Arctic's top predator, proudly walks on the tundra within its fasting habitat in Churchill Canada 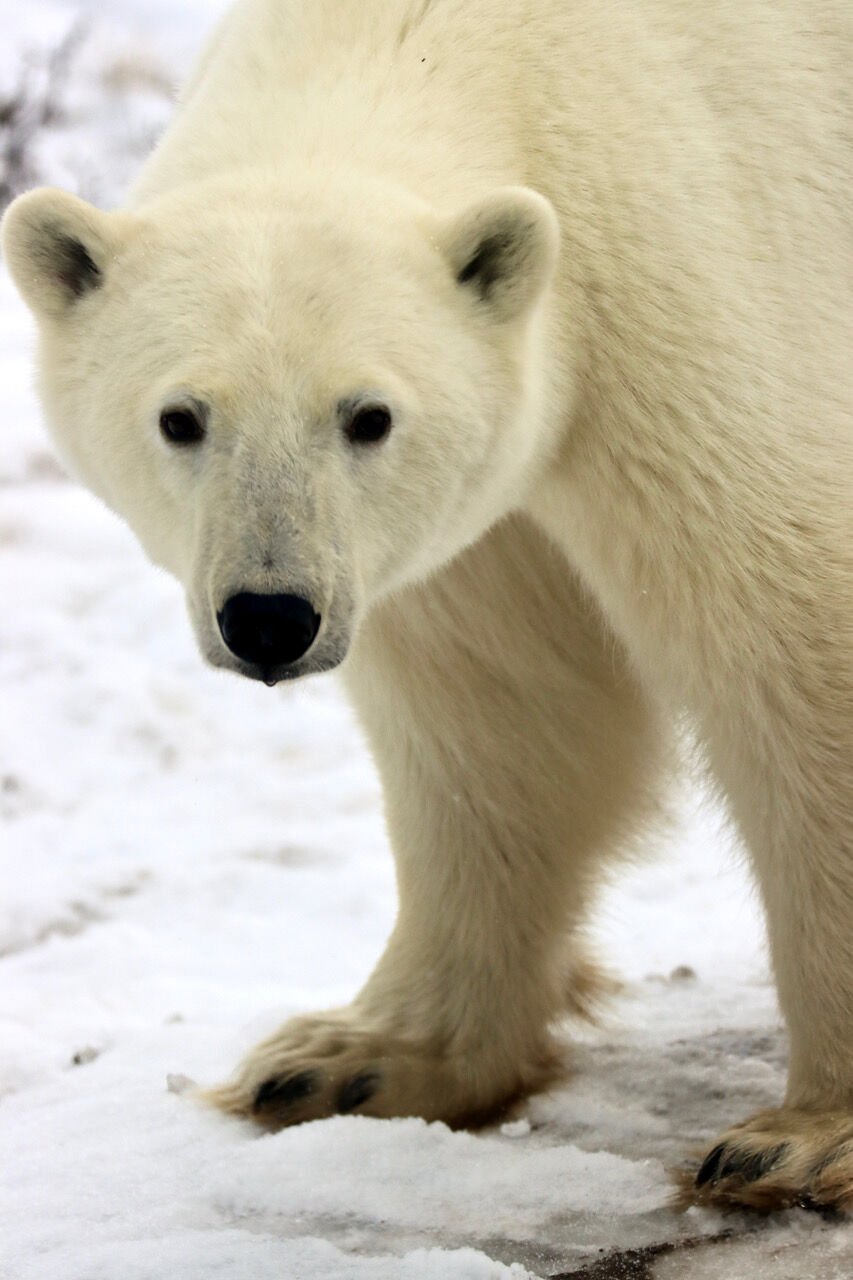 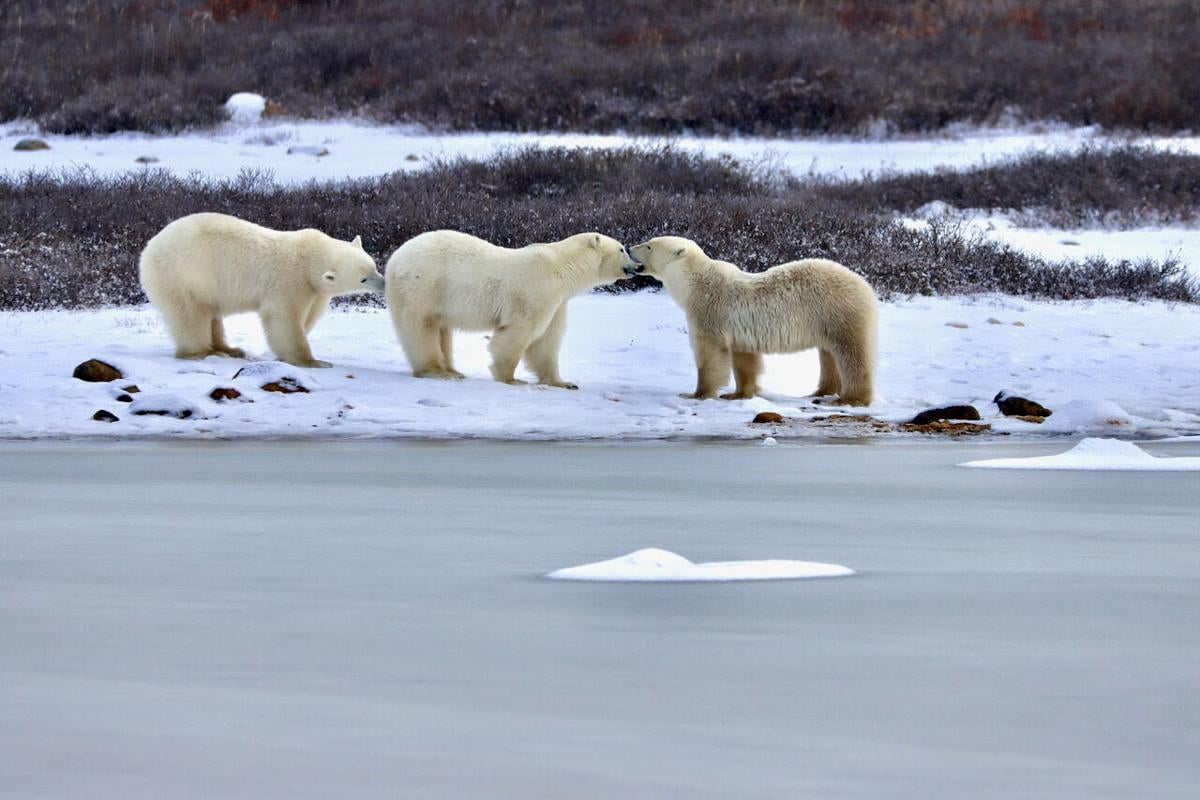 Sub-adult polar bears greeting each other near the ice pond on the tundra in Churchill Canada. 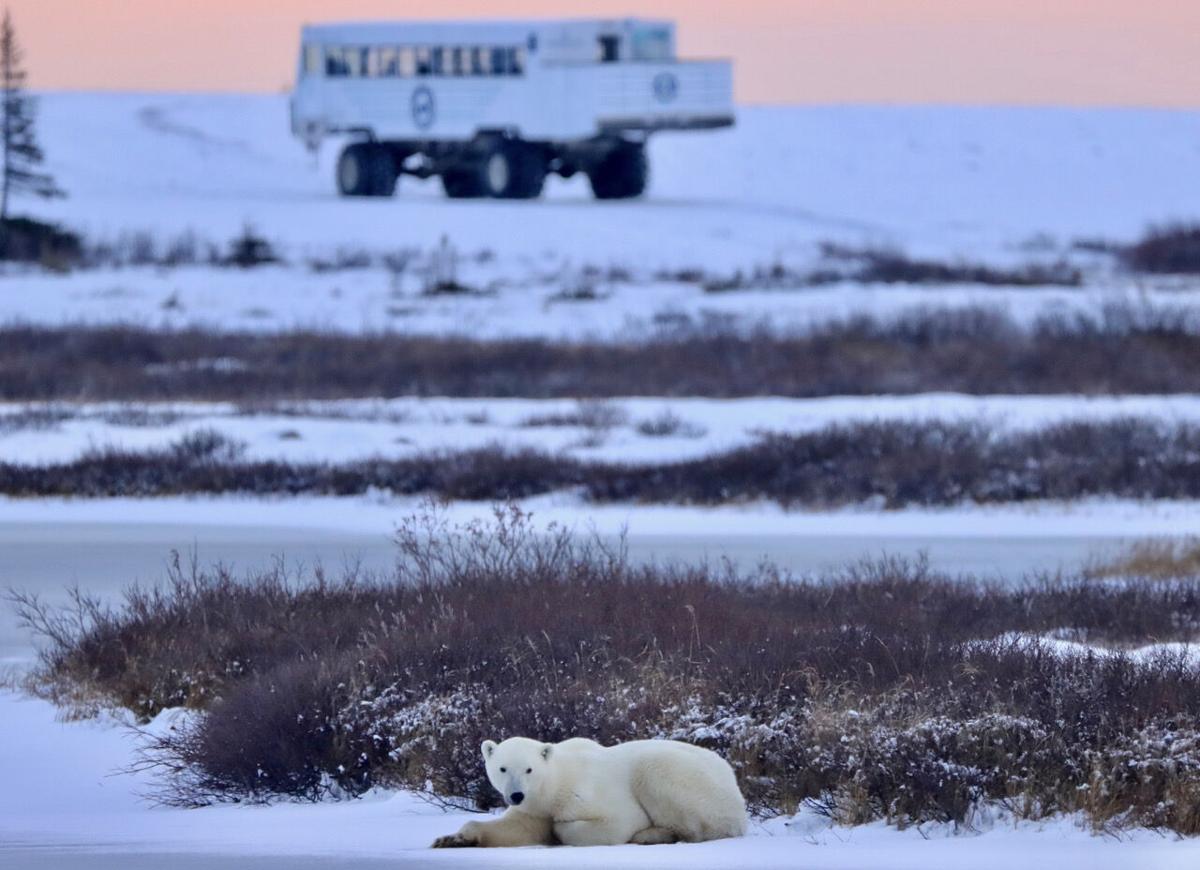 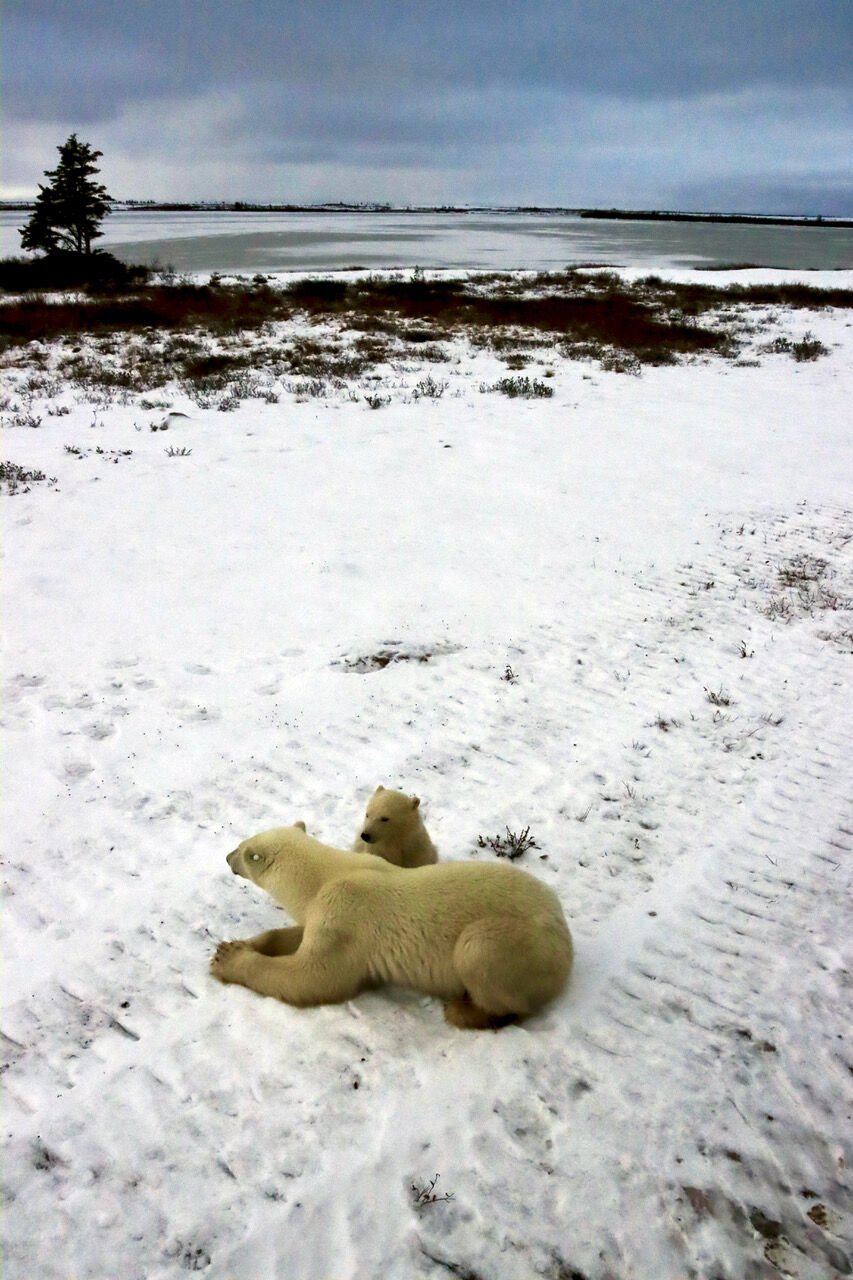 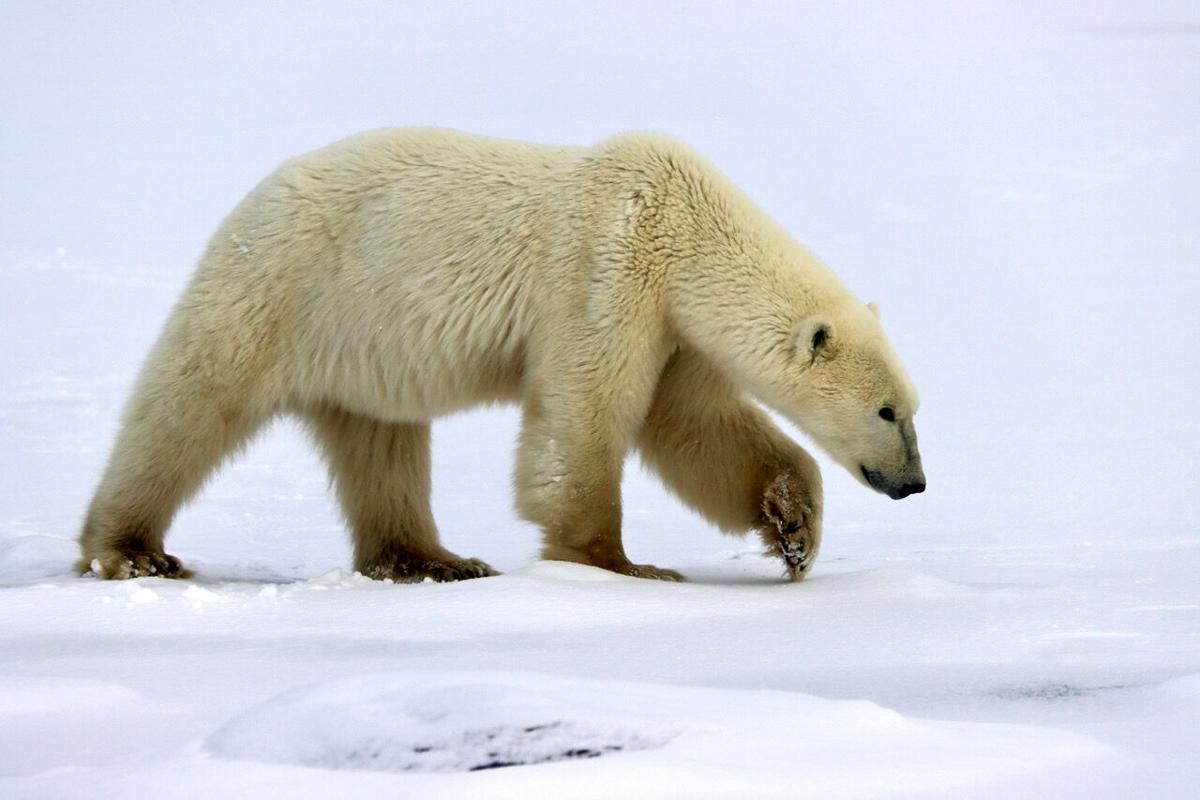 Adult male polar bear following the scent of the female near the Tundra Lodge in Churchill, Canada.

An adult female moves on by three playful sub-adult polar bears on a pond in the tundra in Churchill, Canada.

Dr. Robert Burke stands in front of the Inuksuk along the Hudson Bay at Churchill, Manitoba, Canada. This cairn is a symbol of friendship, hope, and safety.

An adult polar bear, the Arctic's top predator, proudly walks on the tundra within its fasting habitat in Churchill Canada

Sub-adult polar bears greeting each other near the ice pond on the tundra in Churchill Canada.

Adult male polar bear following the scent of the female near the Tundra Lodge in Churchill, Canada.

Editor’s note: This story is one in an occasional series by Dr. Robert Burke, a retired pediatrician who shares his globe–trotting experiences.

Our adventure takes place in the northern Canadian province of Manitoba, in a small town called Churchill. Known as the “Gateway to the Arctic,” Churchill is a former fur-trading outpost for the Hudson Bay Company and lies at the 58th parallel north just below the Arctic Circle, situated on the mid-western bank of the Hudson Bay. Her population has dwindled steadily to fewer than 800, two-thirds of which are indigenous people, mostly Chipewyan and Swampy Cree, but some Metis and Inuit.

This isolated town is now completely dependent upon tourism. So, we took every precautionary measure to prevent COVID-19 from devastating that community, as one case could. All of us were fully vaccinated. We tested negative before departure from the states, upon arrival in Canada, and before our charter flight to Churchill. Each of us also wore a mask and followed hygiene and social distancing guidelines.

Churchill is also known as the “polar bear capital of the world” because it is the largest gathering place for polar bears. Hundreds of them will hike over eight hundred miles north to get here, after being dropped off ice floes in the most southern part of the Bay by currents as the Arctic ice melts in late spring. Churchill becomes their fall fasting habitat for about six weeks or more while they await new ice.

The presence of hungry, fasting carnivorous bears is dangerous. To protect both the threatened bears and the people, this community has developed very effective and humane protocols for armed bear patrols (with lethal and non-lethal rounds), to alert citizens, to capture and hold bears until they can be safely released out on to the ice, and to restrict people from dangerous places at times. Prior to such protocols, the bears were a potentially lethal nuisance, so many were killed.

Polar bears are carnivorous marine mammals that depend on the Arctic ice for survival. The Norwegian name is “isbjorn”, meaning “ice bear”. The ice is where they live, hunt, rest, and breed. These successful predators have completely adapted to the harsh conditions of the Arctic. But global warming threatens their survival. Arctic ice now melts earlier in the year and forms later. Thus, their hunting season is shortened, forcing them to fast longer on less fat stores.

To better understand polar bears, I joined a group of 15 other travelers with Natural Habitat Adventures in early November to observe their behavior and to photograph them in their natural habitat. To prepare, I read several books regarding our cultural history with polar bears that goes back 8,000 years.

We met in Winnipeg, then took a chartered plane to Churchill, toured the town and area under guidance of the bear patrols with a close bus backup, ate and met with locals, and stayed in the Seaport Hotel.

For three days, we roamed the tundra during daylight hours, always inside special vehicles known as Polar Rovers. Each of us had access to windows that we could open or close and could stand safely on an outside platform to photograph action near and far. Although the temperature was unseasonably warm around 20 degrees, winds set chill factors below that. One day we were at -13. The inside temperature was cozy around 60, depending upon how much the windows and door were opened.

The tundra extends from the Bay to the boreal forest. It has surface ponds surrounded by willow shrubs, many ridges and stones created and left by glacial movements, and rough, rocky terrain devoid of all but a few short scrawny trees. The ponds are shallow at about 3 feet, as the ground underneath is permafrost. We spent part of another day at Dave Daily’s dog-sledding operation in the boreal forest, enjoying a tranquil ride on the dog sleds. The forest is mostly black spruce and tamarack trees (deciduous conifers). This is a windy, dry ecosystem that gets very little rain and less than a foot of snow in a year. The boreal forest forms near the northeasterly flowing river where the trees can access more water.

Undoubtedly, the highlight of our adventure was to observe polar bear behaviors in the wild. We were unusually lucky to watch about 25 bears per day, whereas one group reported seeing only five bears a week or so prior. We quickly learned that getting good photos required understanding bear behaviors, to anticipate their next moves and not to startle them.

Mama-cub interactions were my favorite. They tenderly cuddled or engaged each other with their eyes and caress. Typically, females have one to three cubs, often by different fathers because of induced ovulation and delayed implantation of the fertilized eggs, which may take months. Cubs are born two months after implantation, as tiny as a small squirrel. The mother builds a weather-protected den, usually among tree or willow roots against a ridge, and nurtures the cubs until they can ambulate. She then encourages independence at about two years. The father leaves after copulation. Adult males will sometimes kill cubs so they can re-engage with the female. Sadly, we saw a 1-year-old who had been separated from the mom and wandering around the tundra, likely not to survive.

Some of the mother-cub interactions occurred next to our rover, and many bears were curious, inspecting the vehicle, sometimes standing against the tires or platform.

In addition to observing the bears, we studied the landscape and enjoyed spotting several red foxes, some flocks of ptarmigans, and a rare snowy owl. As we departed Churchill, we noticed a distinct drop in temperatures, increased winds, and waves of slushy ice forming in the Bay.

In another couple of weeks, the polar bears will all be back home on the ice, hunting ringed seals and fattening up before breeding in the spring. Once again the ice will melt, forcing them onto the land, repeating this seasonal migration for survival.