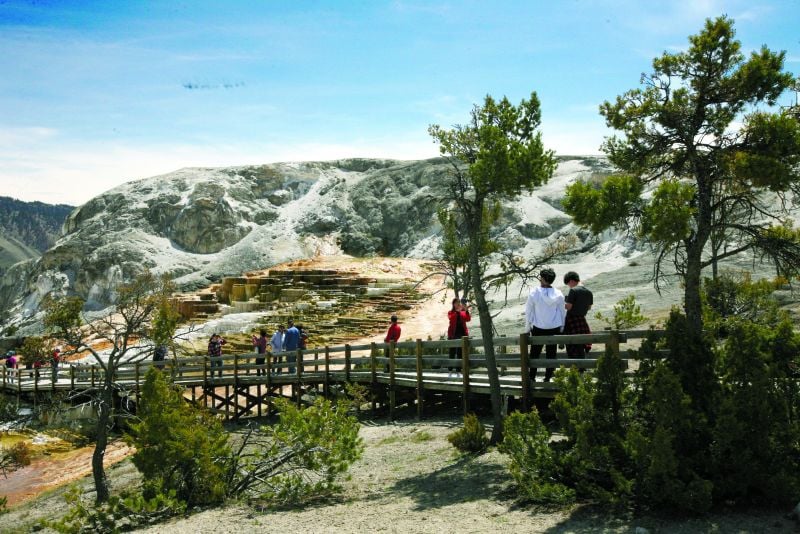 Visitors take photos as they look over the natural features of Mammoth Hot Springs Terraces at Yellowstone National Park. 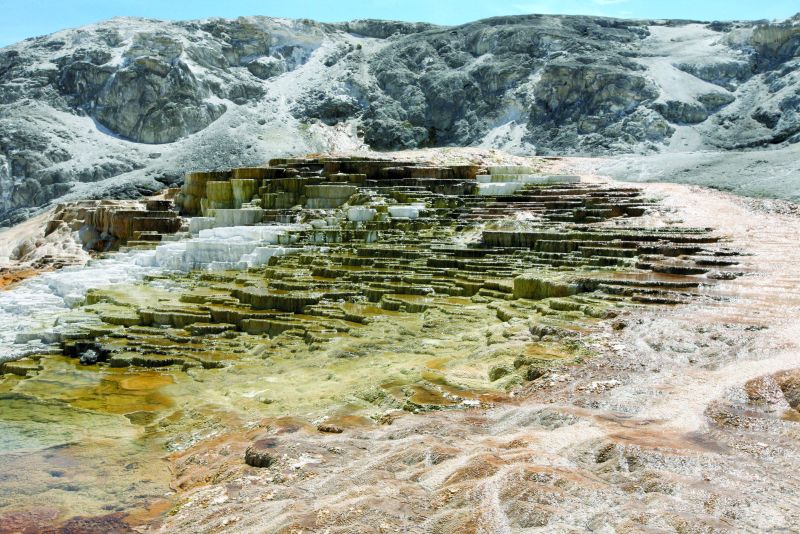 Terraces are among the many natural features at the Mammoth Hot Springs portion of Yellowstone National Park. 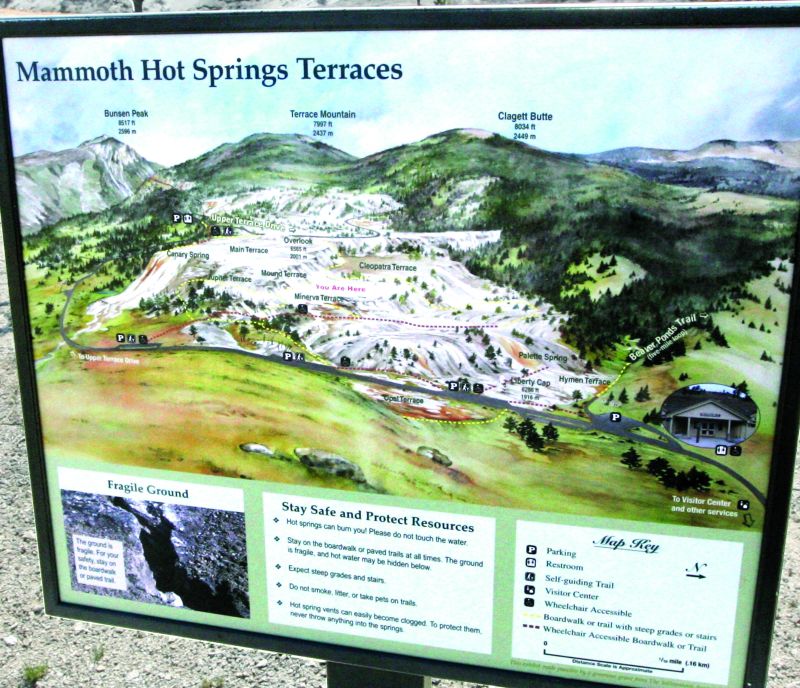 A sign helps visitors navigate Mammoth Hot Springs Terraces, which is dangerously hot in some places and also features steep grades and stairs.

Visitors take photos as they look over the natural features of Mammoth Hot Springs Terraces at Yellowstone National Park.

Terraces are among the many natural features at the Mammoth Hot Springs portion of Yellowstone National Park.

A sign helps visitors navigate Mammoth Hot Springs Terraces, which is dangerously hot in some places and also features steep grades and stairs.

Editor’s note: This story is one in a travel series by Telegram staff writer Jerry Prickett, who accompanied longtime wildlife watcher Waldo Montgomery of Belton during a recent trip to Yellowstone National Park.

YELLOWSTONE NATIONAL PARK — The wonder that is Yellowstone National Park is too great of an expanse to explain to the uninitiated.

You take it in as you can, savoring each moment and the different wonders like a multi-course meal, always finding something better, or at least different, down the road.

The natural wonders of geysers, springs, rivers, canyons and other items that spring from its unique blend of volcanic intensity and wildlife could be explored for years and still left with much more to see.

Following are some notes to give future travelers thoughts of places to go and see and remind those lucky enough to have been at the blessed location how wonderful it truly is:

Old Faithful is the premier attraction for the park, in part because the geyser is so dependable. It erupts every “35 to 120 minutes for 1½ to 5 minutes,” according to yellowstone.net website.

A less faithful, but more majestic eruption can be found in the Norris Geyser Basin. Steamboat Geyser is described on the park’s website as the world’s tallest active geyser. Its major eruptions shoot water more than 300 feet, but it’s totally unpredictable when the next eruption will take place.

Mammoth Hot Springs is a good place to stop for some outstanding scenery. Just be sure you take the time to take photos and catch your breath in the high-mountain air. There’s a shop nearby to get Yellowstone paraphernalia and a visitor’s center where park rangers are helpful in planning out your trip.

If you ask the right people and have the right timing you can see some horned owls nesting near the buildings close to the visitors center. There’s often bison and elk eating grass nearby, and magpies were hanging out in the parking lot.

If it’s wildlife you seek, Yellowstone is the place. With the return of wolves and bears to the park, the natural ecology is returning in what biologists describe as a trophic cascade.

Pronghorns, decreasing across the western United States as their habitat is taken over by domestic animals or human expansion, may have a stronger foothold in Yellowstone with the return of wolves.

While adult pronghorns can outrun wolves, coyotes, bobcats and bears as the second-fastest land animal recorded, their fawns are often targeted by coyotes in particular. Wolves have reduced the number of coyotes, making the pronghorn situation better. A growth in the number of beavers in the park has also been reported.

On a spring drive you can see bighorn sheep calmly grazing near the road. Elk and bison are all over, to the point that veteran wolf or bear watchers chuckle at the excited exclamations of newcomers about the creatures that are so common to them.

In the spring the young bison are particularly visible. Called “red dogs” because of the color of their coats, the youngsters are targets for all the hunters in the park — but they’re usually protected by a herd of powerful animals that even grizzlies are reluctant to tangle with.

Bears and their cubs appear in the spring. One thing that anyone watching should be aware of is that all of these animals are wild and may be set off by a perceived threat or just being too close at any moment.

Keep your distance, use spotting scopes to watch them or long lenses to take photos.

In the rugged outdoors that is Yellowstone and its surrounding area, you must live like people did long ago — maybe 20 or 30 years past. You have no cellular phone service for large areas (it reminds me I almost cried when my “Yellowstone phone” — which had three ways of receiving including the rapidly disappearing analog and got reception almost everywhere, including during a previous visit to the park).

Thanks to intrepid pioneers like Waldo Montgomery of Belton, it is becoming more accessible to watchers from afar. His photos and videos on Facebook have been viewed thousands of times.

Visitors from across the globe

Maybe the place should be named Yellowstone International Park, as the visitors in early spring had a very diverse population.

Many Japanese and people from other Asian countries were at multiple locations in the park, as well as many of Middle Eastern heritage.

Spring snowfalls are not unusual in Yellowstone. The roads in Montana and Wyoming are not sloped like so many in Texas, so in some areas the water collects during rain. It’s far better than sliding off in the ice as we sometimes do in our rare icy days.

Yellowstone Forever, the official nonprofit partner of Yellowstone National Park, funds things like wolf recovery and other park expenses. At least 80 percent of what the non-profit group raises goes to the park, with a staff member of one of their shops in the park saying it was now up to 86 percent.

People wanting to participate can join the organization or order items online at www.yellowstone.org.

The group is a part of the Public Lands Alliance (www.publiclandsalliance.org).

Other things to do

If you fly into Bozeman, Mont., there are some things to do there as well. The Museum of the Rockies, based at Montana State University at 600 W. Kagy Blvd., has an extensive collection of dinosaur bones and was also featuring a Genghis Kahn exhibit this summer.

Watching wolves in Yellowstone: The series

To be a wolf watcher, you need:

Equipment needed for watching Yellowstone wildlife should include a spotting scope, which can be rented in nearby towns (supplies limited, so …