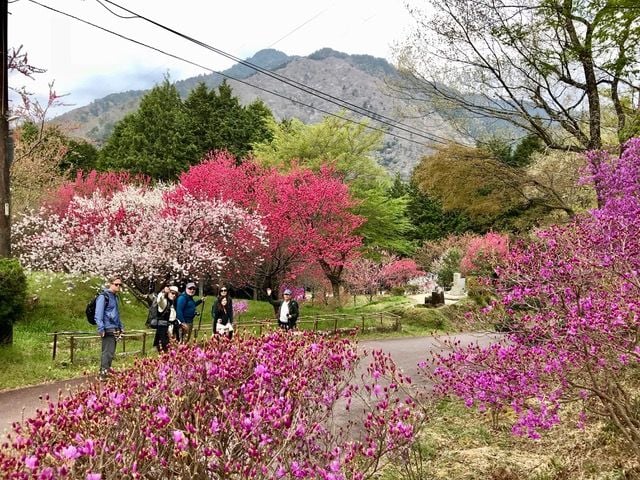 Travelers pause for a photo on the Nakasendo Trail, which becomes quite colorful in spring. 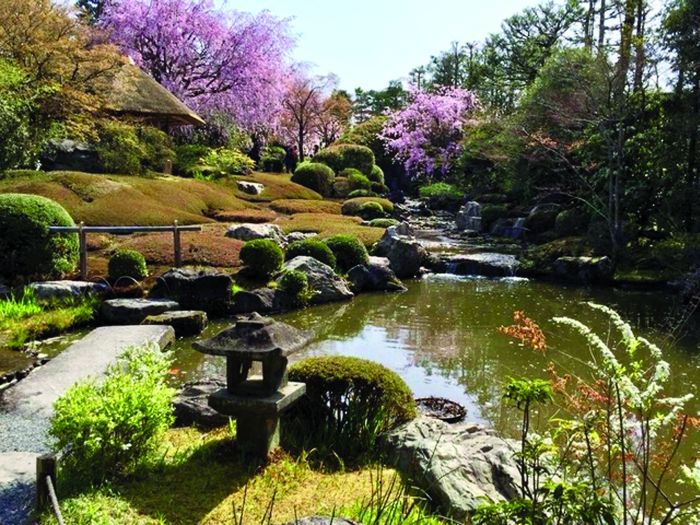 A typical local garden with a Koi pond is shown in Kyoto, Japan. 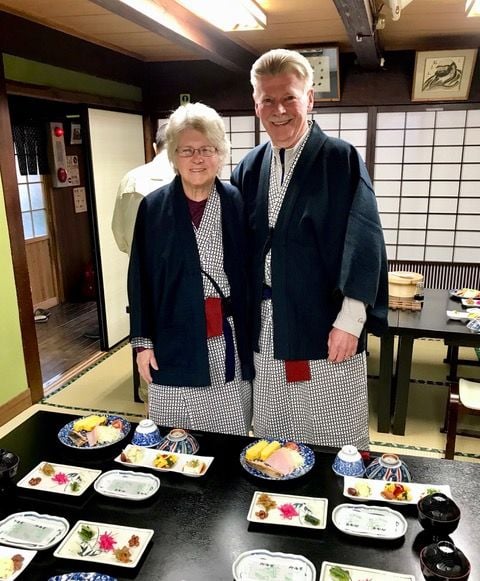 Dr. Robert Burke and his wife, Bonnie, pose for a photo during breakfast at a family inn, Daikichi and Matsushiroya Minshuku, in Magome, Japan. 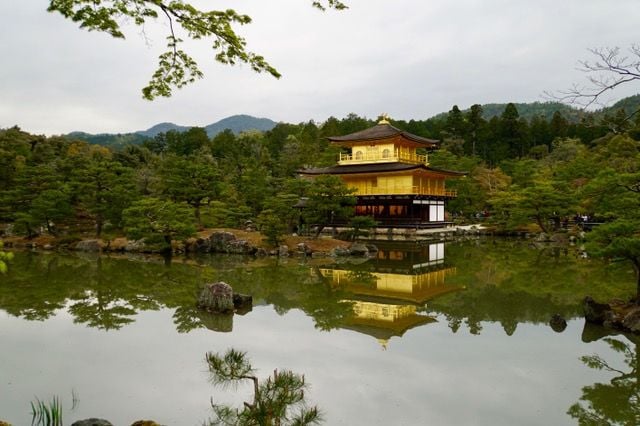 The Kinkaku-ji (Golden Pavilion) is shown in Kyoto, Japan. 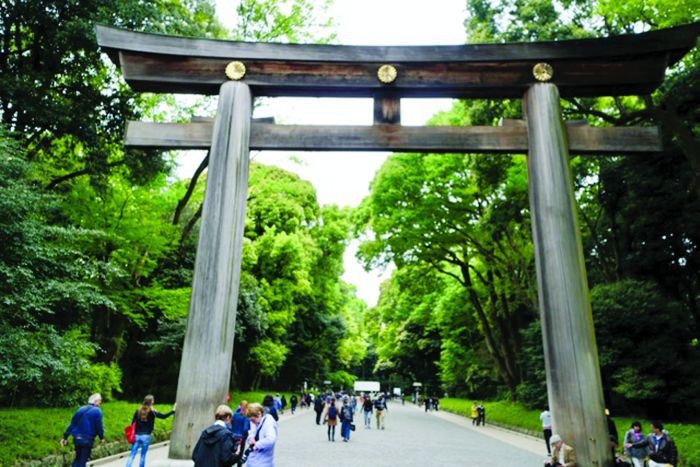 Torii, constructed of 1,500 years-old cedar, is shown at the Grand Meiji Shrine in Tokyo.

Travelers pause for a photo on the Nakasendo Trail, which becomes quite colorful in spring.

A typical local garden with a Koi pond is shown in Kyoto, Japan.

Dr. Robert Burke and his wife, Bonnie, pose for a photo during breakfast at a family inn, Daikichi and Matsushiroya Minshuku, in Magome, Japan.

The Kinkaku-ji (Golden Pavilion) is shown in Kyoto, Japan.

Torii, constructed of 1,500 years-old cedar, is shown at the Grand Meiji Shrine in Tokyo.

Editor’s note: This story is one in series by Dr. Robert Burke, a local doctor who is sharing his experiences from a recent trip to Asia.

Perhaps there is no other country like Japan. This island nation (archipelago with four main islands) in the North Pacific is close to far east Russia, and only 100 miles east of Korea or 500 miles from China. Japan remains unique in its language, Shinto religion, and cultural aspects despite its origins in the seventh century and the rapid pull towards “westernization” by a global economy, international travel, and the internet.

More than 98 percent of its 126 million inhabitants are Japanese. Japan is known for its “consensus-based” structure.

Politically, it is a constitutional monarchy governed by a parliamentary democracy.

This country is considered among the safest in the world, a feeling the traveler also senses. Healthcare here is exceptional and the Japanese enjoy the highest life expectancy in the world.

Bonnie and I joined ten other folks through Mountain Travel Sobek on an eleven-day cultural-hiking tour of Japan, with two local guides. It was our first tour of an extended travel through Asia, to include a five-days self-guided tour of Seoul, South Korea followed by nineteen days in China with Viking River Cruise. Our choice of dates was guided by the hope to see the famous Japanese cherry blossoms at their Spring peak, and we were not disappointed.

Our journey began with a flight from Austin to San Francisco and on to Osaka, Japan. After exploring nearby Kyoto and Nara, we transferred to Mount Koya before moving on to the Kiso Valley to start our hiking along the Nakasendo trail, a 350-mile central mountain route that links Kyoto and Tokyo. In medieval times (Edo period) there were 69 post towns established for travelers. Several of those have been preserved/restored to allow one to experience the beauty of this area and some cultural heritage. Our eighteen-miles, three-day hike through some post towns began in the quaint town of Magome at the beginning of the Nakasendo trail, traversed the Kiso Valley through Tsumago, Nagiso, Najiri, Yabuhara, and through the Torii Pass to end in Narai-juku. A bullet-train ride took us to our final destination, Tokyo.

Throughout Japan, planted and wild cherry trees were in full bloom. In addition, azaleas, peach trees, rhododendrons, camellias, and other flowering plants added to the beauty of mountains, valleys, post towns, and cities. In Kyoto, the most ornate Golden Pavilion, a world heritage site, reflected beautifully with flora in the pond in front of it. The Rokuon-ji Temple, is said to be the “pure land of Buddha” in this world. Another world heritage site, Ryoanji Temple, had a splendid rock garden for meditation and a reflecting pond with lotus flowers. Perhaps the most beautiful of all were the Sogenchi Gardens in northwest Kyoto at Arashiyama, Tenryu-ji, built in the 1400s. The variable sizes and colors of the bamboo forest there gave one the feeling of a fairytale setting. In nearby Nara, former capital of Japan in 710 a.d., the ancient Shinto shrine Kasuga-Taisha and the Todai-ji temple, which is the world’s largest wooden building and houses one of Japan’s largest bronze Buddha statues, were worth the visit, as was the view of the area from a hike to the top of Mount Wakakusa.

One of the most fascinating areas was Mount Koya, in Wakayama prefecture. The Koyasan with its Kongobuji temple was established twelve centuries ago as a center for Buddhist training. The mausoleum (Kobo Daishi Gobyo) and the Okuno-in cemetery make this an amazingly spiritual place. A mile-long forest path is lined by 200,000 gravestones, stone lanterns, and memorials of feudal lords, shoguns, politicians, samurai, and common workers. Typical Buddhist monk vegetarian cuisine was served in our overnight stay there at the Shojoshinin Shukubo, where we also had the pleasure of participating in an early morning Buddhist service. The high priest Hidaka Taknori met with us later to discuss his 35-year legacy of Buddhism there.

The highlight of our journey was hiking along the Nakasendo trail and staying at small inns in several post towns, where ancient architectural buildings (machiya houses) have been restored and where a feeling of the culture past is experienced. We slept on tatami mats, dressed in Japanese robes while eating local food with chopsticks, drank sake, and bathed in the hot public/private baths. Many shrines were encountered in forests and towns, enabling an understanding of the Shinto connection to nature. Magome, our first post town, was situated beautifully on a mountainside with breathtaking views of the valley and other mountains. En route to Tsumago, we passed local homes and gardens, coffee shops, tea rooms, souvenir shops, and many beautiful camellias, azaleas, and cherry blossoms. Our path wound through quiet pine and bamboo forests, as well as along open paths and roads where we met students on a day trip, locals, and others. We also visited two famous waterfalls, where ancient samurai reportedly practiced with swords. In Tsumago, we ate at a local restaurant where the owner showed us his wonderful bonsai collection, some plants in which were two hundred years-old and had won national competitions. Tempura, yakitori (grilled chicken on a stick), Gohei mocha (a rice patty in miso sauce), buckwheat noodles, and an unfiltered sake called doburoku were among my favorite Japanese cuisine and drink.

My favorite hike was en route to Nojiri. After stopping in Nagiso to get supplies and enjoy the views from Momosuke, one of Japan’s largest wooden suspension bridges, we ascended 2225 feet before a 750-foot descent. Our hike covered 9-10 miles over four hours, during which we enjoyed lunch along a hillside that overlooked a beautiful mountain pass and quaint villages. We passed small farms and rural houses, saw rice fields and gardens, went through three bamboo forests and two cedar forests, hiked along streams, and viewed beautiful full bloom peach and cherry trees, as well as many types of flowers. In contrast to that sunny day, a more challenging hike in a harsh rain downpour for two -three hours was the steep 1130-foot ascent from Yabuhara to Torii Pass, with a shorter descent to Narai-juku, our trail’s end. We slept in a traditional inn, then enjoyed percolated Indonesian coffee at a local shop in the morning. At Hirasawa, an easy two-miles hike from Narai, we visited lacquer-ware artisans before transfer by bullet train to a four-star hotel in Tokyo, for a different view of modern Japan with its high-tech toilet seats and fast-paced city life.

In Tokyo, we visited Nihombashi station, the other end/start of the Nakasendo trail. Our tour included the beauty of the Grand Meiji Shrine with its Torii gates made of 1500 years-old cedar and landscaped surroundings, as well as the hustle and bustle along Omotesando street, the subways, the high-end shopping Ginza district, and the chaotic Shibuya Scramble Crossing, where a thousand people may intersect from five streets that come to a center much like Times Square.

Japan is indeed a land of contrasts, as is its culture. Once again, it has been our privilege to share with you the experiences of another journey to one of the unique parts of our world.

Dr. Robert E. Burke, a local author and retired pediatrician, has announces the publication of “Passage Into Asia,” the sixth book in his “Buddy the Globetrotter” series of travel tales.