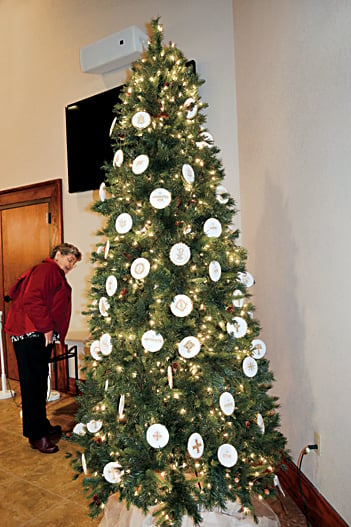 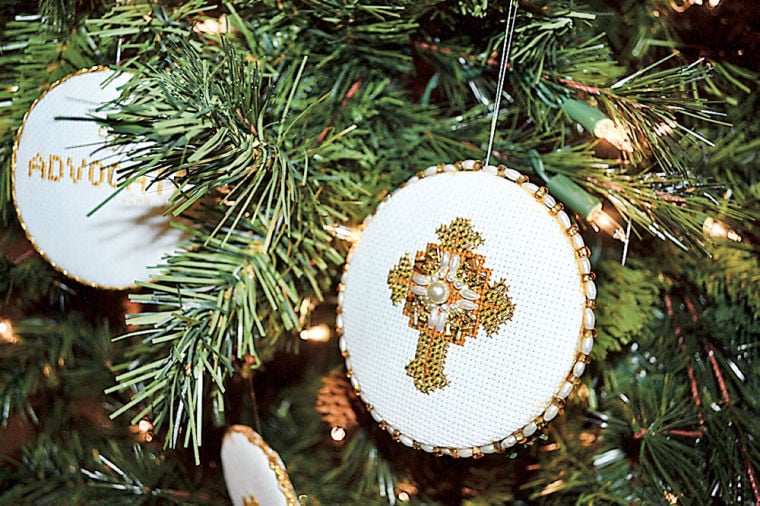 Christ the King Catholic Church has a few Christmas trees set throughout its building, but one of them shines a little differently. The ornaments on this particular tree are all white and gold, all cross-stitched and embroidered, and each has a special symbol related to Christ.

This is the church’s first Chrismon Tree. The idea was Bonnie Moeller’s, who had seen Chrismon trees in other churches and wanted to bring one to Christ the King Catholic.

The word Chrismon comes from the Latin “Christi monogramma,” which means “monogram of Christ.” Each symbol on the ornaments represent Christ in some way, whether it be an embroidered cross or one of the many names for Christ in the Bible.

When Moeller got the approval for the idea, she knew that making enough ornaments to fill a tree wouldn’t be a one-woman job. She went to the women’s ministry and ended up with three helpers: Candice Wade, Maria Ornelas and Stella Santos. While Moeller has been embroidering for years, some of the others had only limited experience and one had none at all. The ladies started with simpler designs and gradually created more complex monikers. Moeller would finish each one up with a gold border and add embellishments to some.

Together, the four created 80 ornaments for the tree this year and will continue to embroider more for the next Christmas season. The tree was set up the first week of advent and will remain through the holiday. Moeller said she is hoping for more participation in making ornaments next year, but for many, the Chrismon tree was a foreign concept. Now that church members have seen it, she said many want to get involved with the next one.

Some examples of the ornaments on the tree are the anchor cross (a secret sign for early Christians), the chalice (symbolizing Christ’s passion), the butterfly (symbolizing resurrection and everlasting life) and many different crosses, each specific in meaning.

The Chrismon tree is a non-denominational installation. In short, it’s a religious Christmas tree and symbols traditionally associated with other denominations of churches can be found on the Catholic church’s tree. Besides being a pretty Christmas decoration, the tree can also serve to focus attention on what Moeller says is the “reason for the season,” Jesus Christ.