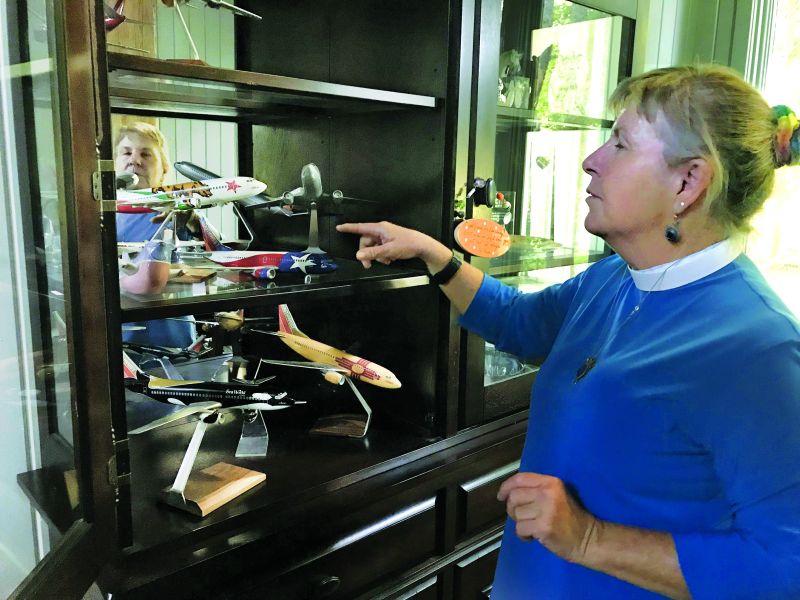 Rebecca Sparks shows models of some of Southwest Airlines’ signature airplanes at her home in Salado. Sparks is a pilot for Southwest and a recently ordained deacon at Christ Episcopal Church in Temple. 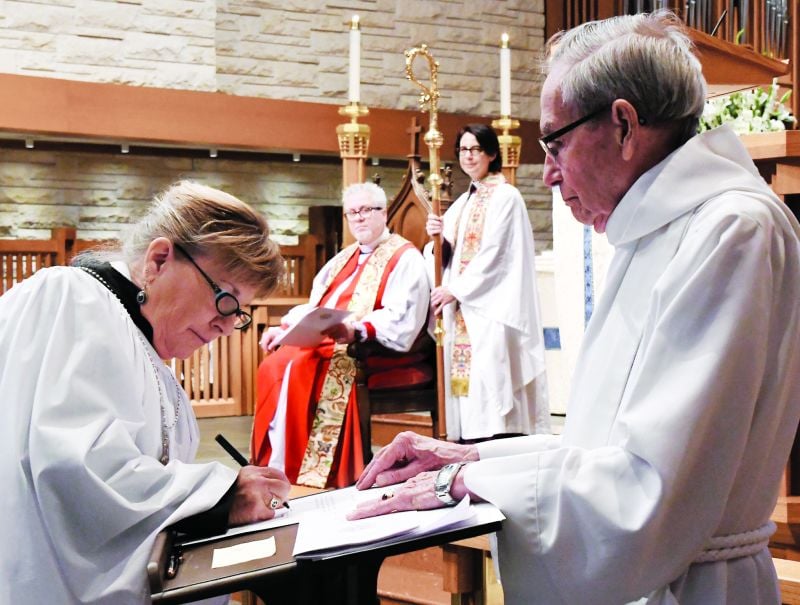 Rebecca Sparks, left, signs her name during her ordination as a deacon in the Episcopal Church in June while overseen by Andy Doyle, Bishop of Texas, Kai Ryan, Canon to the Ordinary, and Canon John Logan, Secretary of the Diocese.

Rebecca Sparks shows models of some of Southwest Airlines’ signature airplanes at her home in Salado. Sparks is a pilot for Southwest and a recently ordained deacon at Christ Episcopal Church in Temple.

Rebecca Sparks, left, signs her name during her ordination as a deacon in the Episcopal Church in June while overseen by Andy Doyle, Bishop of Texas, Kai Ryan, Canon to the Ordinary, and Canon John Logan, Secretary of the Diocese.

The first includes the clerical collar she donned as the new deacon at Christ Episcopal Church in Temple. The second uniform is the one she wears while sitting in the cockpit of a Boeing 737 as a pilot for Southwest Airlines.

Because of her family’s dedicated involvement, Sparks grew up going to church.

“I tell everybody I’ve been everything between Catholic and Church of Christ,” she said. “I’ve probably been every denomination in between, but I grew up in the panhandle Baptist.”

Her family moved seven times while she was in high school, but they ended up in Fort Worth her senior year where Sparks decided being a pilot sounded like fun. She was able to get the written portion of her pilot’s license out of the way and got a job at an airport where she was paid in flying time.

Sparks earned her pilot’slicense when she was 17 years old, and did her training at Central Texas College in Killeen.

She’s been flying for 45 years.

“These are all signature airplanes from Southwest, and that’s who I fly for,” she said, indicating the collection of model 737s displayed in a cabinet in the dining room of her new home in Salado.

“I’ve been flying for them for 31 years and it’s like the best company that anybody could work for,” she said. “It’s a company that encourages people to have fun and to care, so that just makes for a great work environment.”

In addition to flying, Sparks has also interviewed other pilots applying for jobs at Southwest for 26 years and been a check pilot for more than 15 years.

“When I fly… my schedule is normally three (days) on, four off or four on, three off,” she said.

Sparks said she flies all over the United States and now, because the airline extended its service, Central America.

“So I’ve gone down to Mexico City several times, down to Costa Rica several times, and never thought that at Southwest Airlines when I first got there that I’d be going to some of the places I’ve gone,” she said.

Sparks said flying is the best part-time job anyone can have. The pay is good and she always had several days off a week. She said that time off allowed her to be involved with her children’s activities when they were in school. It also allowed her time to devote to seminary training.

She spent one weekend each month in Navasota where the church brought professors from Seminary of the Southwest in from Austin for training.

“In the meantime, I did a lot of studying,” she said. “It’s very intensive. I didn’t imagine myself going back to school, but I did.”

She said the bi-vocational program she trained for would allow her to serve the church as a deacon while still having other vocations, like her job as a pilot.

Sparks said the thought never crossed her mind until her priest, the Rev. Janice Jones at St. Christopher’s Episcopal Church in Killeen, asked her if she’d thought about being a deacon. She said Jones was someone who not only influenced her decision, but also “made a big difference in the lives of so many people.”

“Essentially a deacon is the best place to be because you’re the one trying to get the church out into the world and get the world into the church,” she said. “To get the dynamics that are involved with the spiritual dimension that we find in our life in Jesus Christ, but to have it be lived out where we are and then out into the world. So that’s why I truly love that.”

After completing the three-year program, Sparks was ordained June 23 and joined the staff of Christ Episcopal Church on August 1.

“Being a deacon is a vocation in the Episcopal Church — actually in many churches — and their sole calling is to take the Gospel of Jesus Christ and embody it and teach people how to live it in the world in very direct and meaningful ways,” said the Rev. Justin Yawn, rector at Christ Church.

For example, Yawn said one of Sparks’ roles at the church is helping build even deeper connections with mission partners in the community like Feed My Sheep, Churches Touching Lives for Christ, the Salvation Army and others.

“The ministry of a deacon is out in the world, not just in the church on Sunday morning,” he said.

Yawn said Sparks has been doing a fantastic job in the three weeks since she began, and the church is excited and thankful to have her with them.

“Her big thing right now has been meeting with different people in the community to figure out how we can be even more involved in the Temple and Belton area in making a difference in people’s lives, because that’s what Jesus invites us to do,” he said.

Sparks said she’s been doing work with the homeless on and off for years and she’s excited about addressing the perspective of how the church can make a difference in the lives of the homeless, and how people in the church can discover if that ministry is their vocation as well.

She said of course there are challenges to balancing a career as a pilot and the work she’s doing as a deacon, but “as it is, God seems to always work things out.”