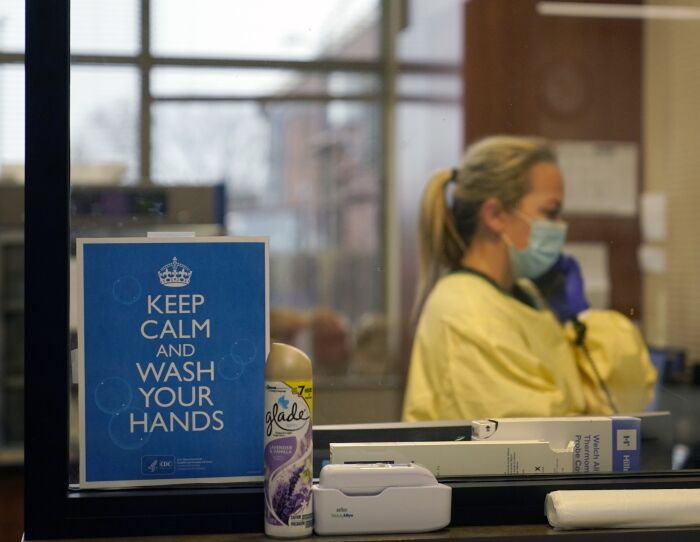 Registered nurse Chrissie Burkhiser works Nov. 24, 2020, in the emergency room at Scotland County Hospital in Memphis, Mo. Scientists say there is reason for concern but not alarm about new strains of the coronavirus, especially the one currently spreading in England. 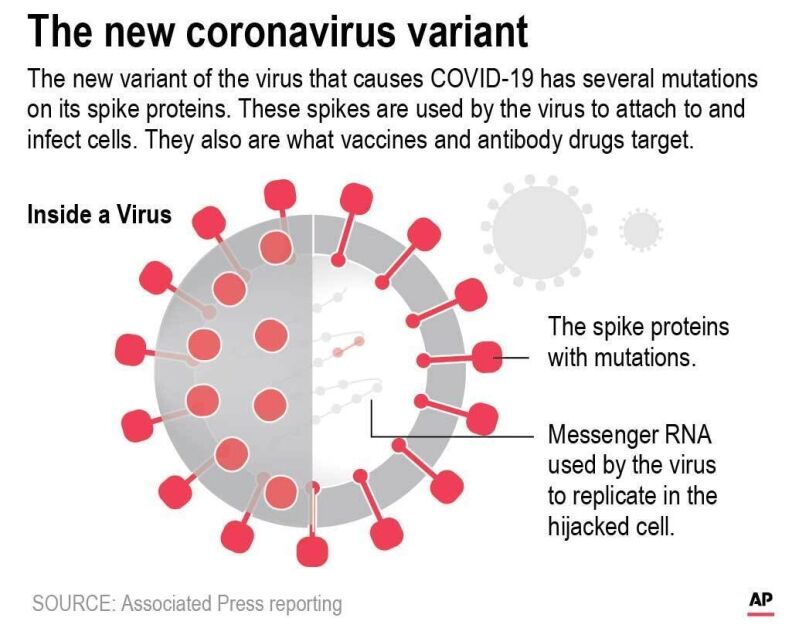 Graphic shows a diagram of the COVID-19 virus.

Registered nurse Chrissie Burkhiser works Nov. 24, 2020, in the emergency room at Scotland County Hospital in Memphis, Mo. Scientists say there is reason for concern but not alarm about new strains of the coronavirus, especially the one currently spreading in England.

Graphic shows a diagram of the COVID-19 virus.

Does it spread more easily? Make people sicker? Mean that treatments and vaccines won’t work? Questions are multiplying as fast as new variants of the coronavirus, especially the one moving through England and now popping up in the U.S. and other countries.

Scientists say there is reason for concern and more to learn but that the new variants should not cause alarm.

Worry has been growing since before Christmas, when Britain’s prime minister said the coronavirus variant seemed to spread more easily than earlier ones and was moving rapidly through England.

The variant has also been found in Harris County in Texas and in Colorado as well.

Here are some questions and answers on what’s known about the virus so far.

Where did this new variant come from?

New variants have been seen almost since the virus was first detected in China nearly a year ago. Viruses often mutate, or develop small changes, as they reproduce and move through a population.

Most changes are trivial. “It’s the change of one or two letters in the genetic alphabet that doesn’t make much difference in the ability to cause disease,” said Dr. Philip Landrigan, a former Centers for Disease Control and Prevention scientist who directs a global health program at Boston College.

A more concerning situation is when a virus mutates by changing the proteins on its surface to help it escape from drugs or the immune system, or if it acquires a lot of changes that make it very different from previous versions.

How does one variant become dominant?

That can happen if one variant takes hold and starts spreading in an area, or because “super spreader” events helped it become established.

It also can happen if a mutation gives a new variant an advantage, such as helping it spread more easily than other ones that are circulating.

Scientists are still working to confirm whether the variant in England spreads more easily, but they are finding some evidence that it does. The variant “out-competes the other strains and moves faster and infects more people, so it wins the race,” Landrigan said.

The British variant was first detected in September, WHO officials said. A new South African variant also has emerged.

What’s worrisome about the British variant?

It has many mutations — nearly two dozen — and eight are on the spike protein that the virus uses to attach to and infect cells. The spike is what vaccines and antibody drugs target.

Dr. Ravi Gupta, a virus expert at the University of Cambridge in England, said modeling studies suggest it may be up to two times more infectious than the version that’s been most common in England so far.

He and other researchers posted a report of it on a website scientists use to quickly share developments, but it has not been formally reviewed or published in a journal.

Does it make people sicker or more likely to die?

“There’s no indication that either of those is true, but clearly those are two issues we’ve got to watch,” Landrigan said. As more patients get infected with the new variant, “they’ll know fairly soon if the new strain makes people sicker.”

A WHO outbreak expert, Maria Van Kerkhove, said that “the information that we have so far is that there isn’t a change” in the kind of illness or its severity.

What do the mutations mean for treatments?

A couple of cases in England raise concern that the mutations in some of the emerging new variants could hurt the potency of drugs that supply antibodies to block the virus from infecting cells.

Studies on antibody response are under way, Van Kerkhove said.

One drugmaker, Eli Lilly, said that tests in its lab suggest that its drug remains fully active.

Scientists believe current vaccines will still be effective against the variant, but they are working to confirm that.

British officials reiterated that there is no data suggesting the new variant hurts the effectiveness of the available vaccines.

Vaccines induce broad immune system responses besides just prompting the immune system to make antibodies to the virus, so they are expected to still work, several scientists said.

What can I do to reduce my risk?

“The bottom line is we need to suppress transmission” of the coronavirus, said the WHO’s director-general, Dr. Tedros Adhanom Ghebreyesus.

“The more we allow it to spread, the more mutations will happen.”