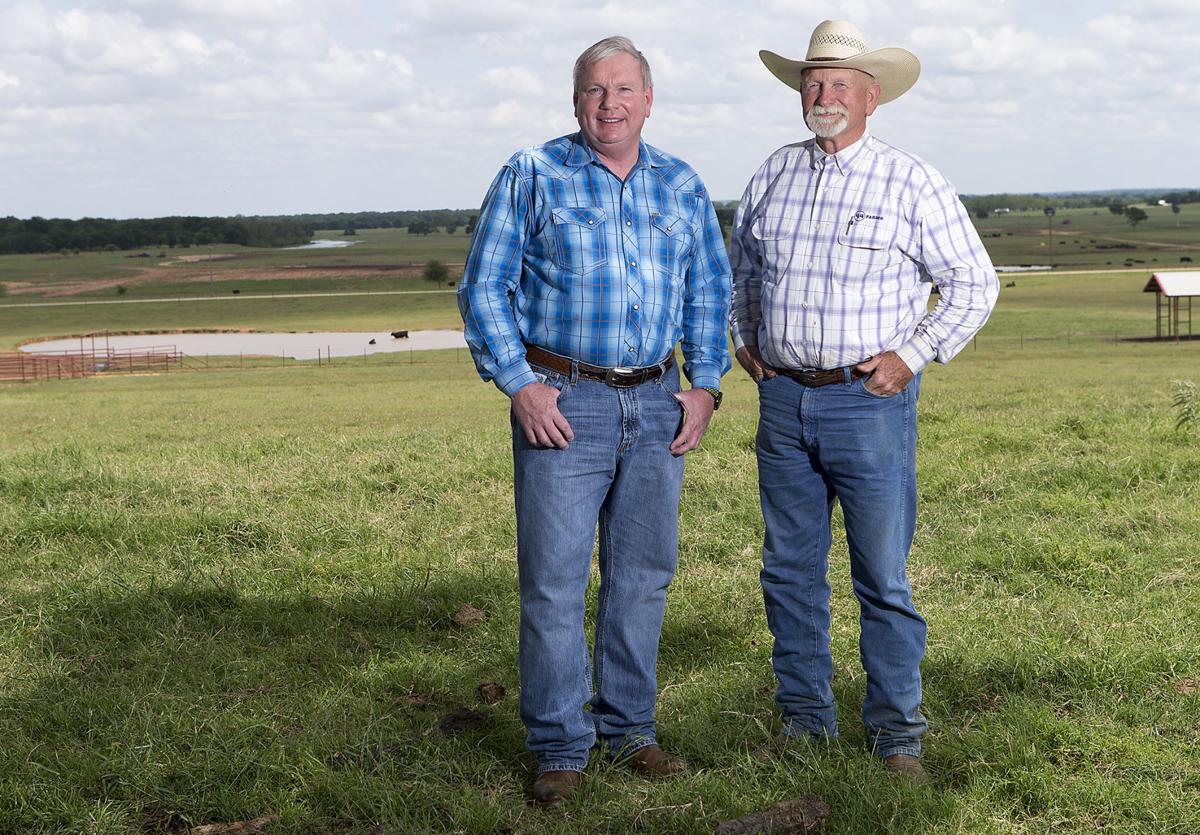 Owner Bob McClaren, left, and general manager James Burks pose for a portrait at 44 Farms in Cameron on Saturday. 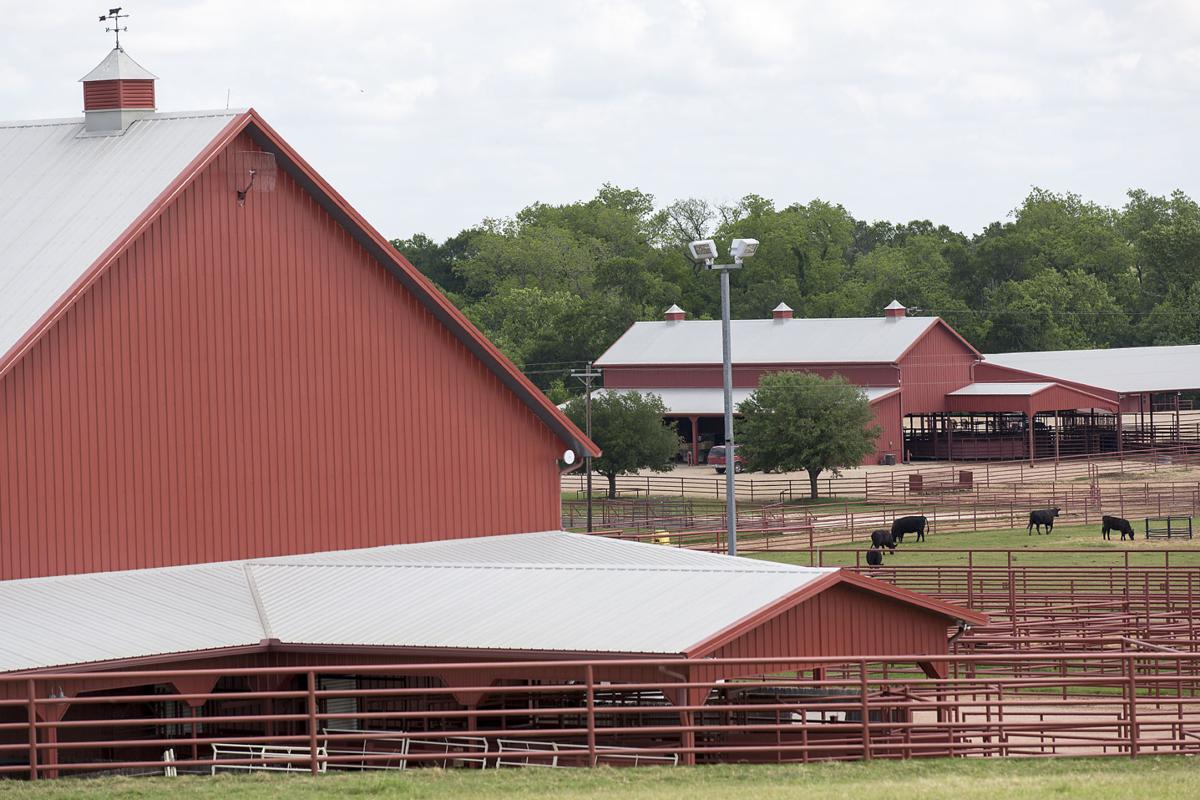 The auction barn, left, is shown at 44 Farms in Cameron on Saturday.

Pastures are shown at 44 Farms in Cameron on Saturday. 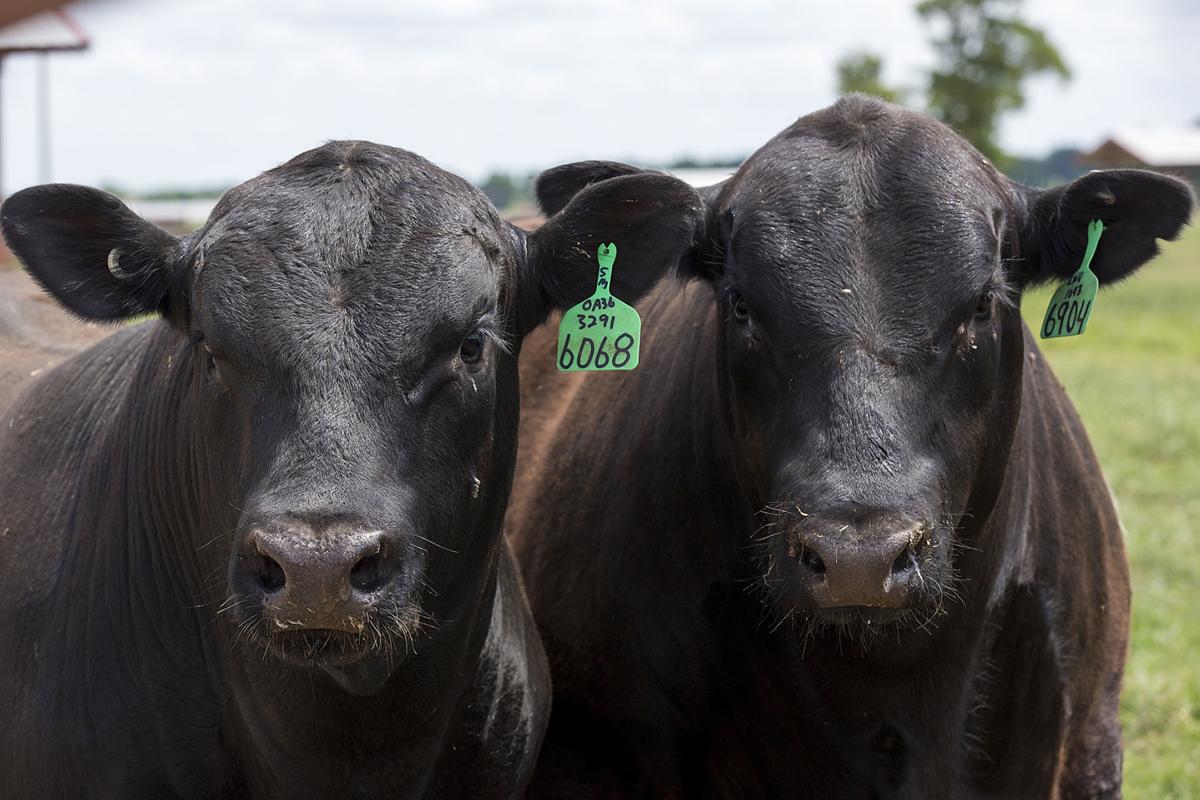 Owner Bob McClaren, left, and general manager James Burks pose for a portrait at 44 Farms in Cameron on Saturday.

The auction barn, left, is shown at 44 Farms in Cameron on Saturday.

Pastures are shown at 44 Farms in Cameron on Saturday.

CAMERON — In children’s books, farms have lush, rolling green hills dappled with crisp blue ponds and dotted with bright red barns. Cowboys ride horses from one open pasture to the next and livestock is not confined in small pens.

That idealized scenery is present at 44 Farms. The pristine Cameron establishment could put any storybook farm to shame.

The nationally recognized Angus genetics and branded beef business began as a small family farm at the beginning of the 20th century.

“44 Farms was started by my great-grandparents on this same land,” owner Bob McClaren said. “They were primarily cotton farmers back in those days, but they also had some cattle. They filed for a brand in 1909, and it was the number 44. They never branded their cattle with anything but that.”

“After over a century, I still don’t know the story,” McClaren said with a laugh. “All I know is they filed for the brand and it’s been listed in the Milam County office ever since.”

Time passed and the farm was split up among descendants. Some continued to farm and some focused on ranching. McClaren’s grandfather was one of the ranchers.

McClaren’s father left the farm and raised his family in Grand Prairie, but McClaren always loved visiting his grandfather’s farm.

“Farmers and ranchers are the original conservationists,” he said as he thought about his grandfather.

McClaren worked as a lawyer for 10 years and was president of the Houston Astros from 1992 to 2003, but he never stopped thinking about the farm and its potential.

McClaren began working on the 44 Farms genetic program in the late 1990s and it became the focus of the business in 2000, he said. McClaren purchased back most of the original land that belonged to his great-grandparents, and then some.

The 44 Farms headquarters currently sits on about 2,000 acres.

“Our core business is great Angus genetics,” McClaren said. “We sell those genetics in the form of registered Angus bulls and females, embryos and semen. If you’re a rancher and you have 500 cows and really want to improve the quality of your offspring, you’d ideally artificially inseminate those 500 females with the very best bloodlines.”

The bulls are all under the age of two and before the day of the auction prospective buyers receive a catalog containing detailed information about each bull for sale.

“The purchased bulls will go all over the country and breed for other ranchers,” McClaren said. “Out of the 50 states, over 35 are represented at every sale. The only state we haven’t sold cattle to is Alaska.”

Yes, they’ve even sold bulls that went to Hawaii.

Bulls typically live 10 to 13 years, although some make it to age 20. Females live for 12 to 15 years, also with a few exceptions. They can be bred as early as 14 months and have a gestation period of nine months.

“When a cow is born someone goes to the pasture to check on it at least twice a day,” McClaren said. “The day they’re born they get a tag with a number that goes into our computer system. Anytime anything happens to them — they get immunization shots or need doctoring — it goes into the system. As they mature, we’ll know if they were able to conceive every year, who their calves were and who bought those calves.”

The baby cattle stay with their mothers about seven months before being weaned.

“We do that in a very kind and gentle way around here,” McClaren said. “Then we separate the bulls from the females and put them into small groups of 50 to 75 in various pastures. They have lots of grass and lots of room to run and play. They stay in those groups until they’re sold at our sale.”

Many of the pastures at 44 Farms have airy and modern structures on the land.

“We try to put different working facilities everywhere for the safety of the cattle and the cowboys,” McClaren said. “That’s a big deal to me and all of us. For example, there’s a hospital, so if an animal has a hurt leg or something, we can bring it there to rest and heal and other cattle won’t mess with it.”

About 20 people work for 44 Farms. About nine staff members work at the headquarters in Cameron and there is a sales team for the branded beef program located in Houston.

McClaren said about 65 percent of their business comes from the genetics program and 35 percent comes from branded beef sales.

The branded beef program started about five years ago and sells meat to 285 corporate buyers — such as restaurant, hotel and yacht companies and food distributors — and to individuals simply looking for a quality dinner.

Last summer, 44 Farms purchased and renovated a 120-year-old building in Cameron that serves as their online distribution center. A person can order steak, ribs, beef jerky and other products via 44farms.com and have it shipped to anywhere in the country in dry ice.

A stylish front room with a counter sits empty in the front of the distribution center. The plan is to turn it into a space for walk-in orders, McClaren said, adding that they’re probably a year or so away from launching that component.

The beef is all natural, which is one of the reasons it’s so popular, McClaren said.

“We don’t sell anything that has ever got an antibiotic and we don’t give them any hormones,” he said. “That became standard in the sixties, seventies and eighties to help cattle grow faster and grow more muscle. But we feel like that really adversely affects the marbling characteristics of the animal, so we don’t do that.”

Marbling — the term used to describe the little white flecks in a piece of meat — is how beef quality is assessed in the industry.

“Marbling is what makes a piece of steak really flavorful and delicious,” McClaren said. “The more marbling you have, the better it’s graded by a government inspector.”

USDA prime beef is the highest grade. In the United States, only about 2 percent of beef is prime.

“In our program, we’ve been fortunate enough to run approximately 35 percent of our beef as prime,” McClaren said. “The next grade down is called USDA choice. It’s still good, there’s just a little less marbling.”

44 Farms produces prime or choice grade meat about 96 percent of the time, McClaren said. The final grade is called USDA select and is the poorest quality of the three grades.

“If we were to have an animal that was select grade, it wouldn’t go into our program,” McClaren said. “We don’t sell USDA select beef.”

In February, the CNBC television show "Billion Dollar Buyer" signed a $2 million deal with 44 Farms — the show’s largest deal to date. The cable TV show is hosted by Tilman Fertitta, a billionaire hospitality mogul, as his network describes him.

Fertitta visits small businesses across the country, hears their pitches and decides if he wants to order products or services from them for his private business, Landry’s.

“I’ve known Tilman (Fertitta) since I was with the Astros,” McClaren said. “He asked if we’d be on the show and I said, ‘Well, the show has drama and we aren’t about drama here, so I don’t feel comfortable doing it.’ But he called a couple times and we finally said OK.”

The show filmed 44 Farms several times — twice at the ranch and once at an October bull sale. Filming was also completed at restaurants in San Antonio and Houston that serve 44 Farms beef.

“They tested the product with customers on the show and over 95 percent said they loved it and would buy it again,” McClaren said. “That was a really great experience.”

The television exposure has increased 44 Farms' online sales, but McClaren believes the business still has plenty of room to grow. He said he wants to increase the number of restaurants and hotels that buy their meat from 44 Farms, as well as continue focusing on the local market.

“I am so excited about where we are here in Cameron,” McClaren said. “We’re right in the middle of the Dallas Fort Worth, Houston, Austin and San Antonio triangle of 20 million people. There are lots of people moving to Texas, which means more restaurants. I think we’re in the right place.”

Ingram said this part of Texas is known for good grazing and good pasture land. He said the Blackland soil is high in nutrients and allows farmers and ranchers to produce good forage — meaning grasses, legumes and other cattle feed grows well in the area.

“44 Farms is also very supportive of our 4H programs in Milam,” Ingram added. “They hold contests out there, support the community and certainly play a large role in our local economy.”

McClaren said he considers 44 Farms to be a unique combination of cutting-edge technology and old-fashioned techniques.

The business stays modern and up-to-date with trends when it comes to current food issues and what consumers want, which means an advanced and continually improving artificial insemination program. When it comes to daily operation on the farm, though, quality life for the cows and cowboys is the priority.

“Docility of cattle is a big part of our program and we go way beyond the norm in the way we treat them,” McClaren said. “We do most of our work on horseback to keep the stress down. We’re very traditional in our values, our cowboy way of life and how we treat people.”

Years ago, a customer toured 44 Farms and saw the vibrant pastures, clean accommodations and fresh water available to every animal.

“He looked at me and smiled,” McClaren said.

“He said, ‘You know, if I believed in reincarnation, I would want to come back as a cow at 44 Farms.’ I thought that was pretty cool.”