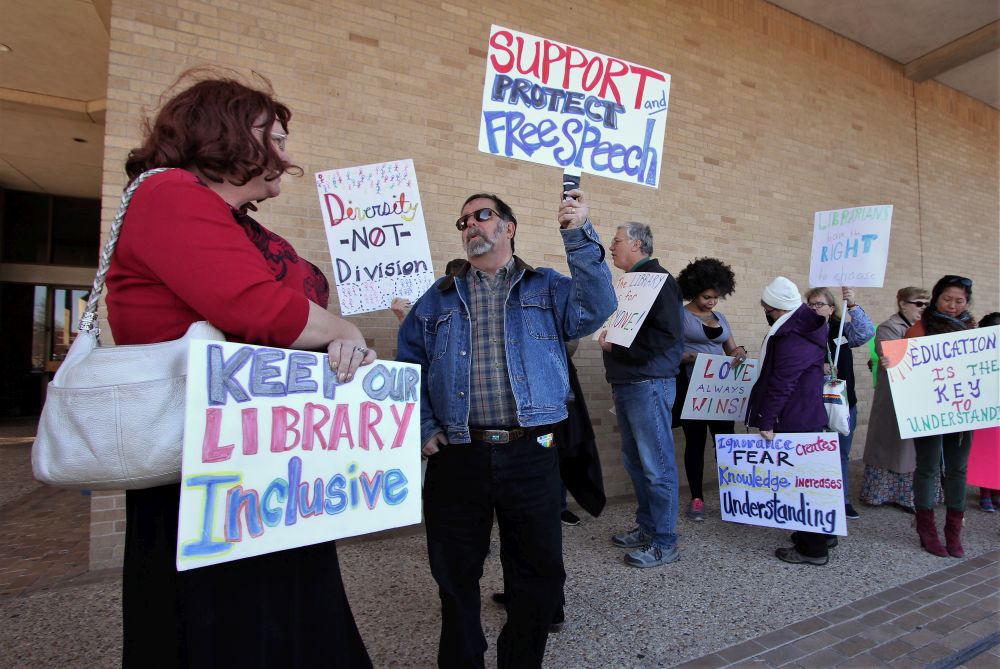 Stephanie Purdue of Austin and William Rosenberg of the Bell County Democrats hold signs in support of the library. 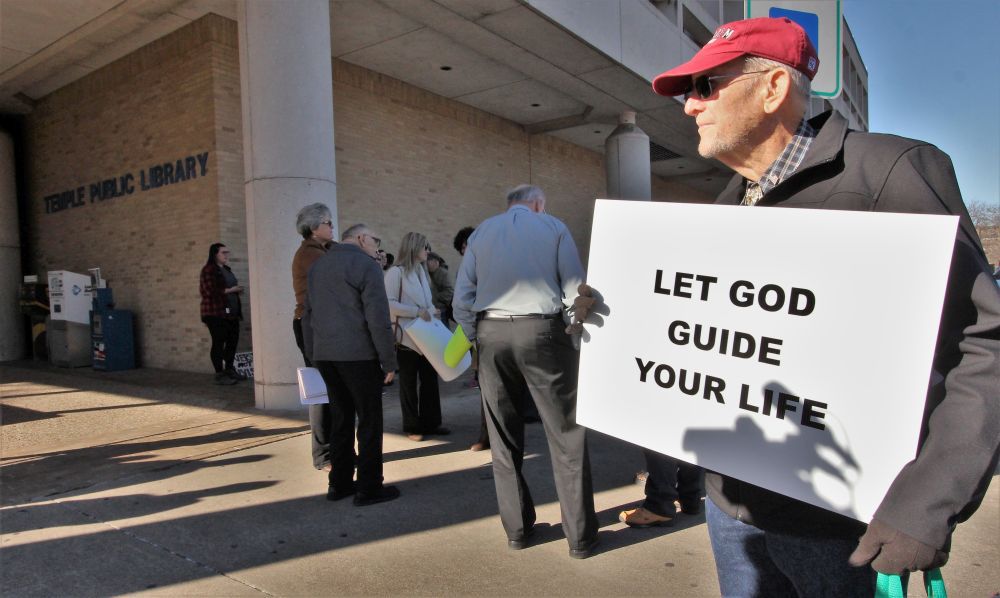 Stephanie Purdue of Austin and William Rosenberg of the Bell County Democrats hold signs in support of the library.

The debate over the Temple Public Library’s LGBT-themed displays from last summer culminated Tuesday during a 2½-hour meeting of the library board.

In August, a local group called Concerned Christian Citizens criticized the display on its Facebook page. Several residents on both sides of the issue spoke about the displays at the library board’s October meeting, prompting the city to begin crafting a library display policy.

On Tuesday, more than 40 residents shared their opinions at a board meeting that was moved to the McLane Room instead of the board room because of the crowd of more than a hundred people in attendance.

Belton resident Tracy McLoud spoke in favor of the displays, saying the American Library Association, a nonprofit organization that promotes libraries, advocates that library material should not be removed because of “partisan or doctrinal disapproval.”

“To put in a policy or practice guidelines that inhibit a librarian’s ability to provide information to the public or to allow for the censorship of such information through an approval process would go against the ALA guidelines,” McLoud said. “Stifling the representation of the LGBT community or pairing the information with information from religious or activist groups which might slander this community would contradict the librarians’ efforts to create a safe, inclusive space that provides information to the entire community.”

Joe Goodson, president of Concerned Christian Citizens, said that the library shouldn’t advocate for any particular group or viewpoint over another.

“We’re talking about an agenda that wants to force its values on me and my children in my taxpayer-funded library,” Goodson said. “If we’re going to put up a bulletin board that is telling my children to celebrate something that I am telling them to avoid, then we need to balance it.”

CJ Grisham, a candidate for District 55 state Representative from Temple, also said that since the library is publicly funded, it shouldn’t take a stance on such issues.

“It’s the agenda we have a problem with. We are being forced to accept an agenda and a lifestyle that we disagree with,” Grisham said. “Because the library is taxpayer funded, it shouldn’t be pushing any agendas.”

Bob Blair of Killeen argued that having such a display doesn’t necessarily mean the library is advocating for the LGBT lifestyle.

“The state, county and cities recognized Confederate heroes a week and a half ago. Does that recognition advocate armed rebellion, treason or slave holding? Of course not,” Blair said.

Blair said he believes the librarians should be allowed to disseminate information as they see fit.

“Librarians are professionals and they require a professional level of training to carry out their duties. Normally, we wouldn’t consider substituting our own judgment for those who have been trained professionally,” Blair said. “There are some who might make this a political issue. It is not one.”

“To say that this issue is not political is to be blinded as to what is going on,” Hall said. “By allowing the display, the library unintentionally endorsed these ideas and these beliefs.”

State Rep. Hugh Shine was unable to attend the meeting, but his campaign released a statement Tuesday afternoon.

“If I had been a member of the Temple City Council and learned of the LGBT display in the Temple Library, I would have insisted on its removal immediately,” Shine said in the statement. “I do not support the display, which is contrary to Central Texas’ foundation of faith and family.”

The board did not take any action on the matter. City Manager Brynn Myers said earlier this month that the city is developing a policy for library displays, which is expected to be put in place early this year.

A library is “a place set apart to contain books, periodicals, and other material for readin…

I am writing to dismiss much of what Amos Martinez wrote in his letter on Jan. 15.