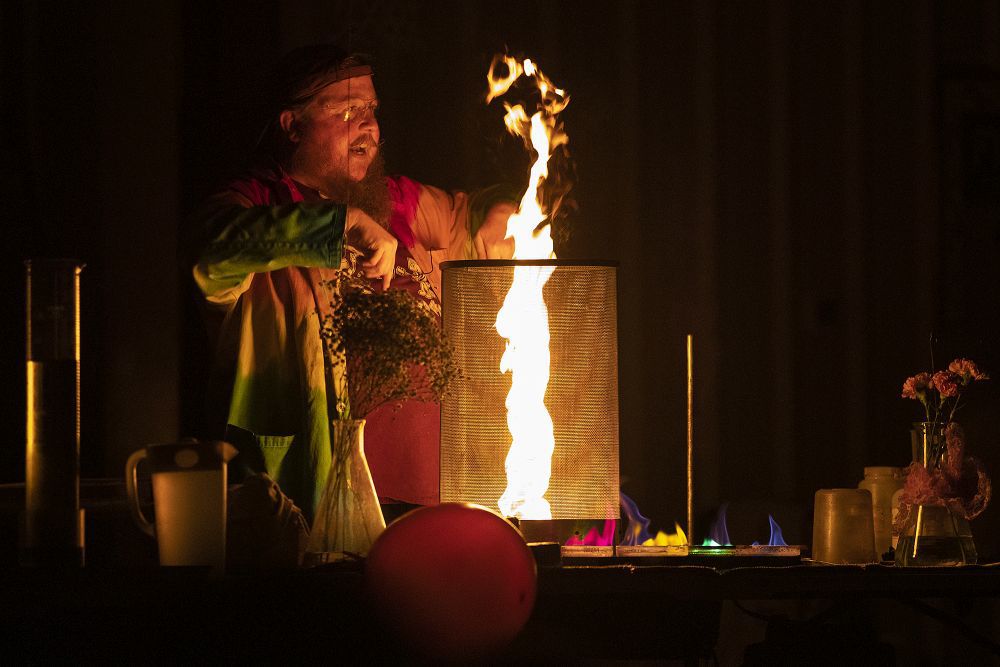 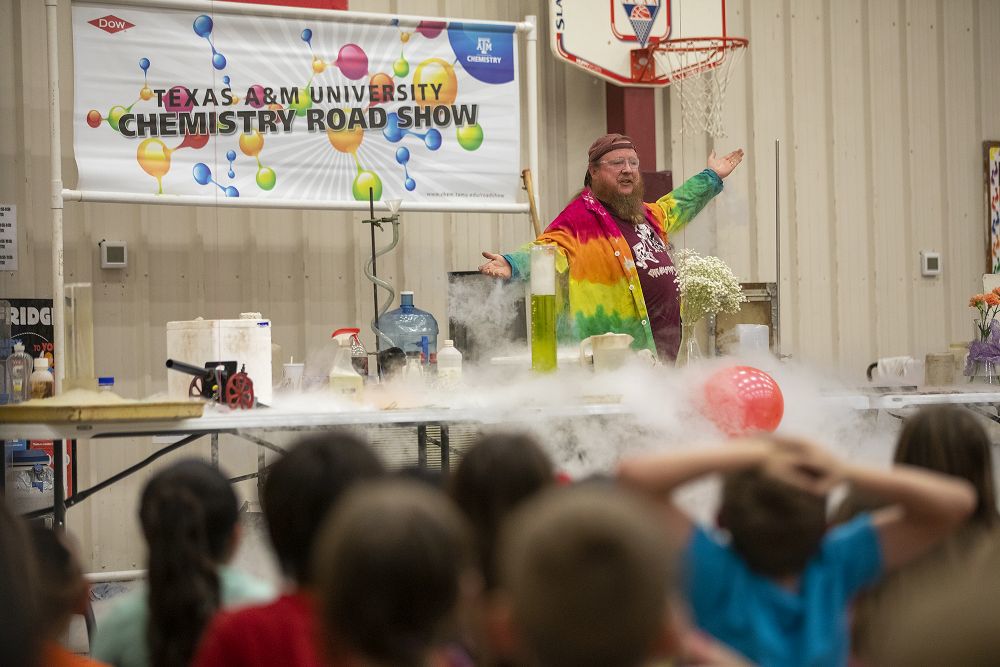 James Pennington with the Texas A&M Chemistry Roadshow performs a demonstration with liquid nitrogen at Troy Elementary School on Thursday.

James Pennington with the Texas A&M Chemistry Roadshow performs a demonstration with liquid nitrogen at Troy Elementary School on Thursday.

TROY — A fire tornado, a balloon shish kabob, hydrogen explosions and a carnation that shattered like glass were just a few of the spectacles at the Chemistry Road Show.

Troy Elementary School hosted the Texas A&M University science program Thursday, and for an hour and a half, Professor James Pennington gave students a taste of the more magical side of science.

Pennington said the educational outreach program is designed to show that there are fun results from the hard work of learning and doing science.

“It’s meant to be educational, but we don’t expect them necessarily to remember everything we said, so it’s more to get them excited and interested in science,” Pennington said. “Hopefully, it also motivates them to kind of do some research and find out some more information.”

Pennington said he can see the affect of the program through his work as a college professor.

“I’ll run into students that I saw five, 10 years ago,” he said. “Sometimes they end up at A&M. … We’re actually doing some educational research to try and gauge the impact, but right now it’s mostly anecdotal.”

The research results might not be available yet, but the short-term impact at Troy has been positive.

“I’ve heard (students) talking about it in halls,” Assistant Principal Kenny Westmoreland said. “They want to know when we can start doing some of that stuff in the science lab.”

Pennington shattered flowers using dry ice, but then was able to put his hand in the same beaker and pull it out unscathed. When he put a balloon in the dry ice, students expected it to shatter as well, but instead it slowly deflated as the air molecules inside slowed down.

“Eventually they (the molecules) will condense down into a little puddle of liquid air at the bottom,” Pennington said.

Westmoreland said that while many of Pennington’s experiments were beyond elementary capabilities, third-graders have done some lab work studying the properties of dry ice this year.

Pennington involved a number of teachers in his experiments, even getting one to loan him a dollar bill.

“The reason I asked to borrow Ms. (Kim) Epperson’s money is we’re going to burn this, and I don’t burn my own money,” he said.

Pennington paused throughout his experiments to ask the student body what would happened next, and encouraged them to shout out suggestions even if they might turn out to be wrong.

“One of the biggest problems I have with my college students — and this one (I see) from you guys — is you’re smart,” he said. “A lot of times smart people are afraid of being wrong.”

Pennington said he hopes his presentations help give students an appreciation for and an interest in chemistry, even if they don’t continue studying it after they finish school.