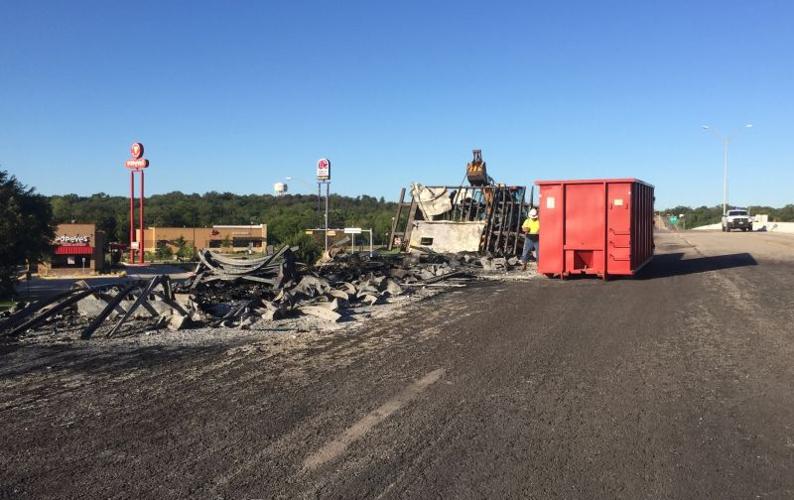 Damage can be seen to the road following an 18-wheeler fire on Interstate 35 in Belton. 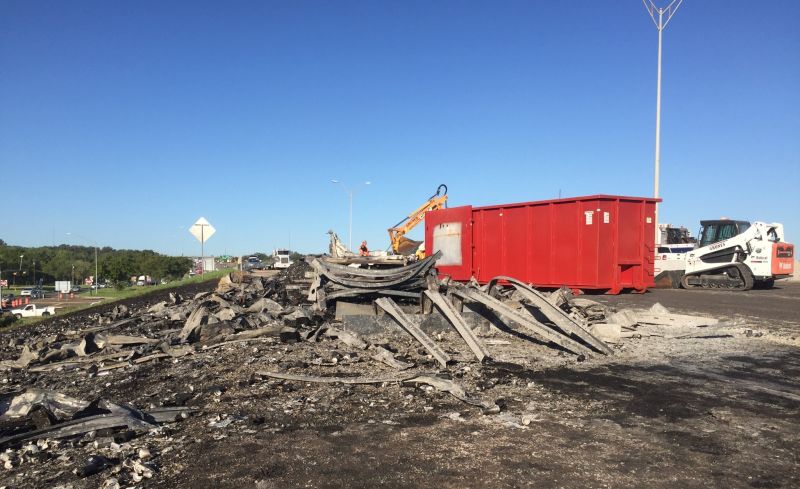 The remains of a burned tractor-trailer can be seen following a fire Friday morning on Interstate 35 in Belton. 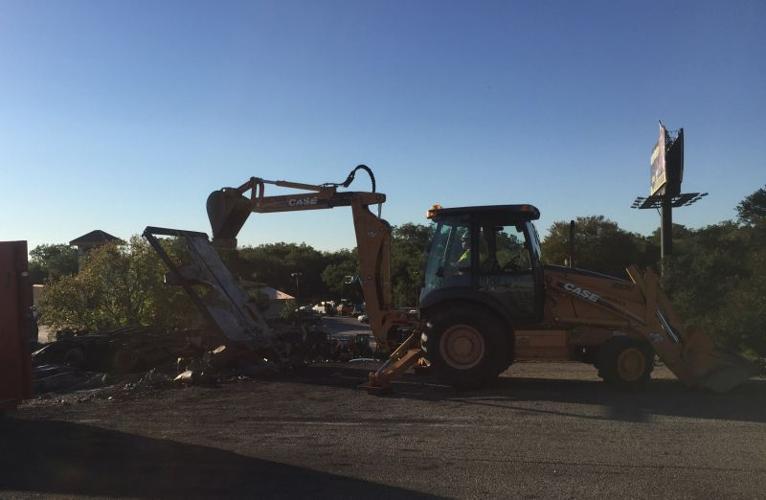 A worker helps clear the scene of a tractor-trailer fire Friday morning on Interstate 35 in Belton.

Damage can be seen to the road following an 18-wheeler fire on Interstate 35 in Belton.

The remains of a burned tractor-trailer can be seen following a fire Friday morning on Interstate 35 in Belton.

A worker helps clear the scene of a tractor-trailer fire Friday morning on Interstate 35 in Belton.

BELTON — A fiery vehicle on Interstate 35 spewed flaming aerosol cans across the highway, damaged the asphalt and prompted an hours-long closure Friday.

The tractor-trailer incident occurred at about 3:42 a.m. Friday morning on northbound I-35 between Central and Sixth avenues in Belton, forcing the closure for all lanes.

The truck driver reported seeing flames in his rearview mirror and was able to pull over. With the aid of motorists, he detached the trailer about 100 yards north of Central Avenue before the fire became too intense, city spokesman Paul Romer said.

“Everybody was out of the way” by the time the fire grew, Romer said.

The fire popped loudly, throwing cans of Axe body spray onto nearby streets and drawing spectators who watched the roaring flames. The fire was more severe on the northbound lane, but the southbound traffic was also rerouted as flames caught grass along the road on fire.

Nobody was hurt in the incident, and no other vehicles were involved, Romer said.

Belton firefighters and police officers responded to the incident. The city received 31 emergency calls at the time of the accident.

More than the interstate was affected by the blaze.

At about 8 a.m. Friday, Sixth Avenue headed east was backed up almost to Birdwell Street. Traffic on southbound I-35 was backed up past S. Loop 363 but was starting to move. Northbound traffic was backed up to Loop 121 on I-35 and to George Wilson Road on Interstate 14/U.S. Highway 190.

Jodi Wheatley, spokeswoman for the Texas Department of Transportation, said a section of I-35 in Belton will have to be repaved, but the highway was stable enough for substantial traffic expected for the Labor Day holiday weekend.

A transportation worker at the scene of the incident said early Friday the road was damaged and the consistency of the freeway was like gravel and would need to be repaired.

Contractors “will have to replace the pavement,” Wheatley confirmed Friday afternoon. “Aerosol cans carried fire and damaged the interstate further than just the accident site.”

Repair work is expected to be completed next week, possibly on Thursday, Wheatley said. A final date is pending approval by contractors.

“They feel (I-35) is stable enough to hold up” this weekend, Wheatley said. “They don’t expect it to crumble.”

Axe-d portion of Interstate 35 to be repaired Thursday night

BELTON — After a tractor-trailer carrying Axe body spray exploded Friday on Interstate 35, the Texas Department of Transportation will repair …