Dealers in masks wait for customers June 3, 2020, before the reopening of the D Las Vegas hotel and casino in Las Vegas. 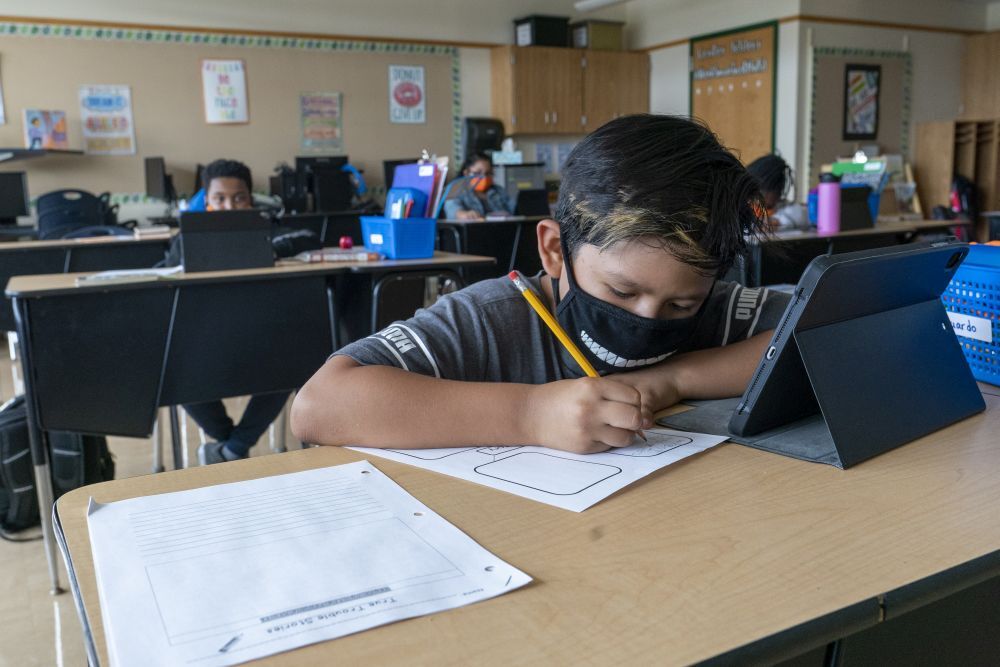 A student wears a face mask while doing work at his desk Oct. 1 at the Post Road Elementary School in White Plains, N.Y.

Dealers in masks wait for customers June 3, 2020, before the reopening of the D Las Vegas hotel and casino in Las Vegas.

A student wears a face mask while doing work at his desk Oct. 1 at the Post Road Elementary School in White Plains, N.Y.

New guidance from the federal government set off a cascade of mask rules across the nation Wednesday as cities, states, schools and businesses raced to bring back mandates and others pushed back against the guidelines at a time when Americans are exhausted and confused over constantly shifting pandemic measures.

Nevada and Kansas City, Mo., were among the locations that moved swiftly to re-impose indoor mask mandates following Tuesday’s announcement from the Centers for Disease Control and Prevention. But governors in Pennsylvania and South Carolina said they would not revert back to stricter mask mandates.

In suburban Atlanta, Jamie Reinhold said she’s considering pulling her kids from school if the district maintains a newly re-imposed mask requirement. The 52-year-old said the CDC’s latest guidance would take the country “backward” and damage confidence in the vaccines.

“If you believe in the masks, go ahead, but don’t try to tell me what to do for my child’s health and safety and immune system,” she said. “It’s my child. It’s my choice.”

School districts were trying to navigate the latest advice, which recommends they require students, teachers and visitors to mask up.

A handful of Republican-led states have already made such orders illegal for schools. Arkansas’ GOP leaders were weighing whether to revisit an April law banning mask requirements, at least for schools.

Meanwhile, Ford Motor Co. said it would reinstate face mask protocols for all employees and visitors at its Missouri and Florida facilities. The two states are among the hardest-hit by the summer surge in which the U.S. is now averaging more than 60,000 new cases a day, driven by the highly contagious delta variant spreading through unvaccinated populations.

Elsewhere, Google postponed a planned Sept. 1 return to the office for most of its more than 130,000 employees until mid-October, following a similar move by Apple to delay its return-to-office plans.

The California tech giant said Wednesday that it will also eventually require everyone on staff to be vaccinated, a mandate that President Joe Biden said he’s also weighing for federal employees.

Other government leaders said they will hold off reinstating mask rules for now.

Pennsylvania Gov. Tom Wolf said he’s not considering imposing a mask mandate in schools or statewide, arguing that such orders were necessary before there was a vaccine.

“People have the ability to make the decision to get a vaccine,” the Democrat told a Pittsburgh radio station Tuesday. “If they do, that’s the protection.”

The CDC’s new guidance applies to places with at least 50 new cases per 100,000 people in the last week, which is roughly 60% of all U.S. counties, federal officials said. Nearly all of the South and Southwest is subject to the guidance, but most communities in the Northeast — with the exception of major metro areas like New York City and Boston — are exempt for now, according to the CDC’s COVID tracker.

The stark partisan divide over mask wearing set up the potential for a patchwork of regulations within states and counties.

The Democrat’s announcement, which does not apply to businesses or restaurants, comes after Republican Florida Gov. Ron DeSantis signed a new law in May giving the state the power to invalidate local pandemic measures, including mask mandates and limitations on business operations.

“We have all come too far. We have all sacrificed too much in this past almost year and a half. We cannot turn back now,” Levine Cava said.

In Missouri, the St. Louis County Council voted Tuesday to reverse the county’s mask mandate, just a day after it became one of the first reinstated in the country.

But Democratic County Executive Sam Page insisted Wednesday that the mandate remained in effect and blamed the pushback on politics.

On the other side of the state, Kansas City Mayor Quinton Lucas, a Democrat, reinstated a similar indoor mask mandate for Missouri’s largest city.

State Attorney General Eric Schmitt, who is running for the U.S. Senate as a Republican, has sued to block the St. Louis-area mandate and has vowed to do the same for Kansas City’s, saying on Twitter that the mandates are “about politics & control, not science.”

But she stressed that the vaccines are working by preventing greater levels of hospitalization and death. Unvaccinated people, she also noted, account for the vast number of new infections. Two-thirds of the vaccine-eligible population in the U.S. has received at least one dose.

“I know this is not a message America wants to hear,” Walensky told CNN. “With prior variants, when people had these rare breakthrough infections, we didn’t see the capacity of them to spread the virus to others, but with the delta variant, we now see that you can actually now pass it to somebody else.”

In Provincetown, Massachusetts, where officials earlier this week re-imposed an indoor mask requirement following a surge in COVID-19 cases this month, store owner Patrick Patrick says he doesn’t mind asking customers to mask up once more.

The owner of Marine Specialties, a long running Army-Navy store, had been leery of officials dropping virus safety mandates ahead of what many expected would be a busy summer season. He even tried to require customers to mask up in his store through the summer, before finally relenting in June.

“If we’d stuck with masks all along, I don’t think we’d be having this conversation,” Patrick said, adding that he’s required all his staff to be masked and vaccinated. “They’re not entirely fun, but we wore them all last summer, and we didn’t have a single case in Provincetown. Now see where we’re at.”

As of Wednesday, the town had reported more than 800 cases associated with the most recent cluster, which started around the busy July 4th holiday. Officials have said many are so-called breakthrough infections in vaccinated people. Seven people have been hospitalized, but no one has died.

Patrick says the business drop-off has been significant, but he hopes the return of masks helps brings visitors peace of mind.

“I don’t see masks as bad for business,” he said. “Maybe for a nightclub or bar it is. But if it gets people back out and feeling safe, it’s worth it. We take care of public health and safety, the dollars and cents will take care of themselves.”

Responding to the rising number of COVID-19 cases, two health care companies — including Baylor Scott & White Health — announced that they will now require vaccinations for its employees.