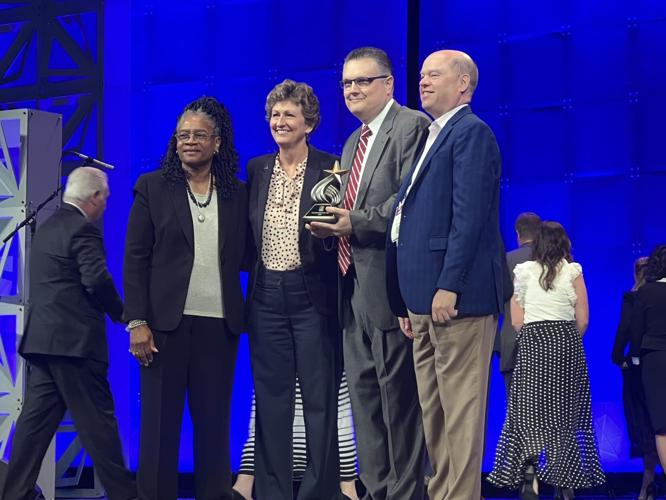 Temple ISD Superintendent Bobby Ott, second from right, was named the 2022 Texas Superintendent of the Year on Saturday at the Texas Association of School Boards convention in San Antonio. TISD school board president Dan Posey, right, is also pictured. 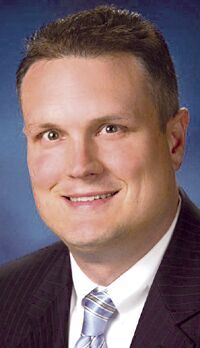 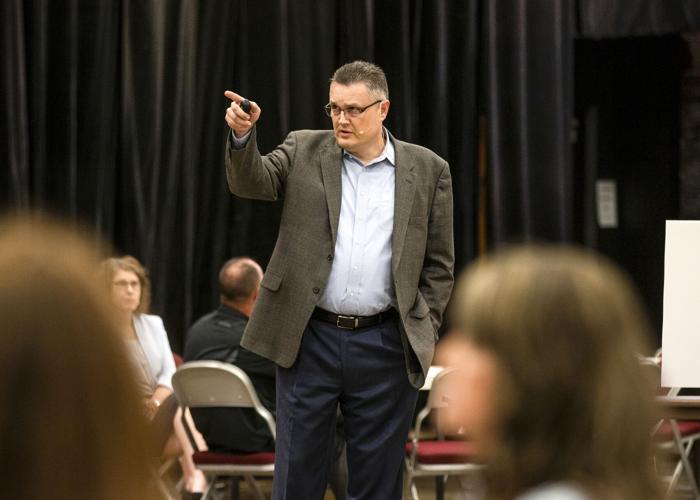 Temple ISD Superintendent Bobby Ott points to a screen showing details of a proposed bond that could be called for an Nov. 2 election. 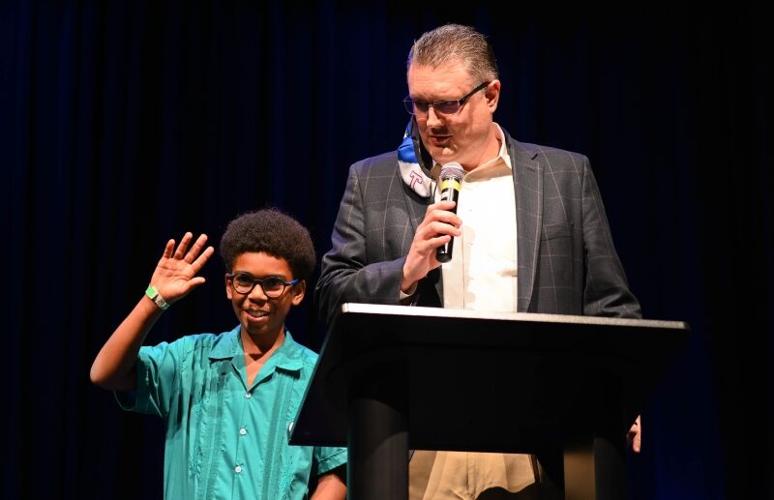 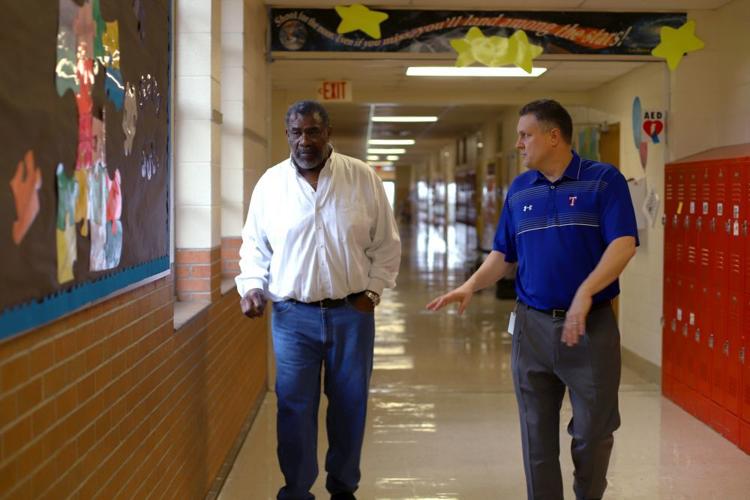 Temple ISD Superintendent Bobby Ott, second from right, was named the 2022 Texas Superintendent of the Year on Saturday at the Texas Association of School Boards convention in San Antonio. TISD school board president Dan Posey, right, is also pictured.

Temple ISD Superintendent Bobby Ott points to a screen showing details of a proposed bond that could be called for an Nov. 2 election.

Temple ISD has the best superintendent in the state.

Bobby Ott, who has led the Temple district for five years, was named the 2022 Texas Superintendent of the Year on Saturday by the Texas Association of School Boards at a convention in San Antonio.

TISD school board trustees were there to cheer on Ott as his name was announced as the winner at the Henry B. Gonzalez Convention Center. Ott, one of five state finalists for the award, was chosen for demonstrating “outstanding achievement, exceptional leadership and an unwavering commitment to Texas public education,” the organization said.

Ott, who was also named the Region 12 Superintendent of the Year, credited the Temple community for its support of the school district.

“This process has taught me two things that I have already understood,” Ott told the Telegram on Saturday. “First it has very little to do with me and a lot to do with where I serve and that’s Temple, Texas. Secondly, the students, staff, parents and community of Temple are very special and this process only validated that sentiment at a larger level.”

Ott said winning the state award was a bit “overwhelming.”

The Copperas Cove native has served as superintendent of Temple ISD since 2018 and as an educator for 24 years, demonstrating leadership in military, rural, urban, suburban and fast-growth districts, TASB said. His previous positions include assistant and deputy superintendent in Temple, Copperas Cove and Killeen school districts. He also served as an executive leader for both the Texas Education Agency and the University of Texas.

“Dr. Ott is an excellent representation of the leadership it takes to sustain a positive impact on students through focused and creative systems that align with student needs and staff support,” Executive Director of Education Service Center Region 12 Dr. Jerry Maze said in a news release. “He and his team are to be praised for their unwavering commitment to their students, staff, and the education profession!”

Along with Ott, other finalists for the state superintendent award were Jenny McGown of Klein ISD, Thurston Lamb of Henderson ISD, Doug Killian of Pflugerville ISD and Scott Muri of Ector County ISD.

“These school leaders exhibit exemplary and visionary leadership toward improving student performance,” TASB said. “They are chosen for their strong leadership skills, dedication to improving the quality of education in their districts, and commitment to public support and involvement in education.”

Upon joining TISD, Ott’s vision was to challenge and inspire staff and students to think bigger, imagine brighter and reach higher, TASB said.

“The Central Texas native invites all staff and students to adopt the mindset that leadership is not a position but an opportunity and responsibility that everyone shares within the district and the community,” the organization said. “The district’s shared vision is to instill the value of learning in each student and prepare them to be future leaders of society. This shared vision is a top reason the district of 8,472 students has not experienced the teacher shortage that has plagued the profession.”

“The Temple Wildcat is known for his competitive nature and contagious perpetual energy, which was widely seen in action as he led the district to keep moving forward and gain momentum through the (coronavirus) pandemic,” the organization said. “He knew this would not happen without his team being intentional about connecting with and caring for students, especially during isolation. His team quickly mobilized meals to feed families seven days a week and made sure learning packets and online lessons were readily available. Throughout the pandemic, he took the lead to connect with staff, students and families, offering real-time updates to provide a sense of normalcy during a chaotic time. He continuously reminded staff that they were the reason the district could successfully navigate the unprecedented challenges and keep moving forward.”

Under Ott’s leadership, the district has seen gains in closing student achievement gaps.

“The performance gap for kindergarten to first-grade Hispanic and first- to second-grade African American students has decreased by 50% due to a continued focus on screening and intervention,” TASB said. “The latest data also shows academic growth in reading in several student groups, including those receiving special education services and English-learning students.”

Ott works closely with the TISD school board, which was named the 2019-2020 Region 12 and Honor Board of the Year (a top five state finalist).

“Board members say the energetic leader is candid and timely with communications and committed to working cohesively as a team,” TASB said. “In addition to regular board work and relations, Ott often provides an in-depth analysis of district functions, such as school finance, enrollment growth and state accountability. The board credits his leadership style and interactive communications with helping them to work as a high-functioning team making decisions in the best interest of those they serve.”

The state organization credited Ott with the recent approval of a $164.8 million bond package last May.

“The bond’s passing did not come without some adversity,” the organization said. “While the leader provided more than 35 community meetings and information presentations, a bond in November 2021 failed by two votes. The TISD leader quickly assured staff, students and the community that everything would be okay and that he and the team would keep working. Soon after, his team held focus groups to gather voters’ input across every precinct. These meetings provided information and a way for participants to give feedback, helping TISD form next steps to prioritize and organize potential bond packages. Efforts around the bonds is just one example of how the superintendent works to move obstacles into opportunities.”

Ott was credited with building community relationships and increasing communication with stakeholders.

“When he began the role, he was charged with engaging the community to make connections and build relationships. One strategy to meet this goal was visiting civic and community groups to share the TISD story, which has led to repeat invitations to the point where he now holds a yearly “road show tour,” the organization said.  “The superintendent also sends a monthly digital newsletter, ‘Ott’s Outlook,’ to families, staff and high school students, equating to more than 5,000 recipients. His transparent and timely communications have allowed the Temple ISD story to be shared accurately and fairly across many channels and formats. To continue telling the story and making connections, Ott personally communicates on Twitter, featuring students and staff doing positive and impactful work.”

Ott serves on the boards of the Temple Economic Development Corp., Temple Education Foundation, Central Texas Workforce, Baylor Scott & White McLane Children’s Medical Center, and as a Wildcat mentor. He is a Texas Association of School Administrators’ executive committee member and was appointed to the Holdsworth Leadership Academy and the 2025 TASA Task Force. He also serves on the ESC Region 12 Technology Foundation Board, which supports schools in 12 area counties.

Temple ISD is a special place, he said.

“This place is just special, and I love everything about it,” Ott said. “As I stated during the interview process, all I try to do every day when I arrive to work is show people locally and across the state all the reasons why I love our children, staff, families, and this community. In my mind, this award belongs to the place God has put me and the people I serve.”

Temple honors Ott for winning Texas Superintendent of the Year