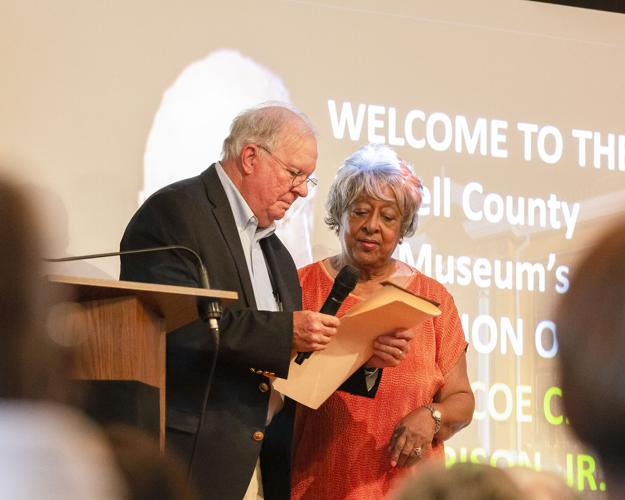 State Rep. Hugh Shine, R-Temple, accompanied by Sandra Harrison, reads resolution from the Texas House of Representatives about the impact Rev. Roscoe C. Harrison Jr. had on the Central Texas community during a dedication ceremony at the Bell County Museum on Friday. The Bell County Museum unveiled a plaque commemorating the dedication of the Roscoe C. Harrison Jr. Auditorium on Friday

State Rep. Hugh Shine, R-Temple, accompanied by Sandra Harrison, reads resolution from the Texas House of Representatives about the impact Rev. Roscoe C. Harrison Jr. had on the Central Texas community during a dedication ceremony at the Bell County Museum on Friday.

The Bell County Museum unveiled a plaque commemorating the dedication of the Roscoe C. Harrison Jr. Auditorium on Friday

The Bell County Museum honored Harrison — a Central Texas trailblazer who died last February at 77 years old — by dedicating the auditorium on its second floor in his name.

The more than 100 area residents in attendance did not leave a single seat empty.

“This is a very special day. Roscoe Harrison was a dear friend of mine for nearly 40 years and I cherished the relationship we had,” state Rep. Hugh Shine, R-Temple, said. “In fact, when I found out that Roscoe was in the hospital back in November, I went to see him. We sat there and we talked about a lot of things. So I consider it a privilege to stand up here with (his wife) Sandra.”

During the dedication, Shine read a resolution from the Texas House of Representatives that will be entered into its archive and journal — a document that details the racial barriers Harrison broke, his Christian faith and the lasting impact he had on his community.

“A pioneering journalist, Harrison was the first black reporter for the Temple Daily Telegram and the San Antonio Express-News, and in 1968 he became associate editor of Jet Magazine where he was part of the Pulitzer Prize-winning team that covered the assassination of Dr. Martin Luther King Jr.,” Shine read from the resolution. “In 1970, he became the first black television anchor in Central Texas when he worked for KCEN-TV until 1993. He was a man of deep faith … and he leaves behind a legacy that will continue to inspire all those who knew him and loved him.”

Danny Dunn, a former mayor of Temple and the vice chair of the Bell County Museum’s board of trustees, is among those who Roscoe inspired.

“I love Roscoe and everybody here did too, and I think that is a testimony to a great man,” he said. “He would look at me periodically and say, ‘I knew you before you were you,’ because he knew my family. That always meant a lot to me.”

Dunn, who initiated the auditorium’s renaming process following Roscoe’s death, emphasized how this Central Texas icon was a friend to many.

“When Rep. Shine came up and said, ‘We were great friends,’ there was like this little pain of jealousy that you get when you find out Roscoe had other friends,” he said, cracking a smile. “But everybody was his friend.”

The Rev. George Harrison recalled one of his favorite memories about his older brother.

“He was told by my daddy and my momma, ‘Don’t go down to the library,’” Harrison said. “He said, ‘Why?’ (My dad) said, ‘Well, it’s because it’s not integrated.’ But he didn’t understand what integrated means. He couldn’t spell it. So Roscoe, at 12 years old, went down there and did something no else did at the time. He went into the library.”

However, Lena Armstrong who oversaw the Belton Public Library — a building that was called the Carnegie Library at the time and that is now part of the Bell County Museum — was charmed.

“She told me not to tell anybody about the card,” Roscoe would say. “So, I told everybody I had a library card from Miss Lena.”

That defining moment is now memorialized on a plaque in the Roscoe C. Harrison Jr. Auditorium.

Sonjanette Crossley — a local minister who recalled the first time she saw Harrison appear on her television as a news anchor — was happy to celebrate Friday on his behalf.

“I’m so excited about the renaming, because not only did Roscoe create history himself but he was an activator for others,” she told the Telegram. “He would do his best to position and connect others with an opportunity. He knew what it was like to have restrictions and then to soon have freedom. So he didn’t care who you were. If he saw something that could be developed, he was going to make sure that he could get you there. I just appreciate that he lived and that he lived a life touching others.”