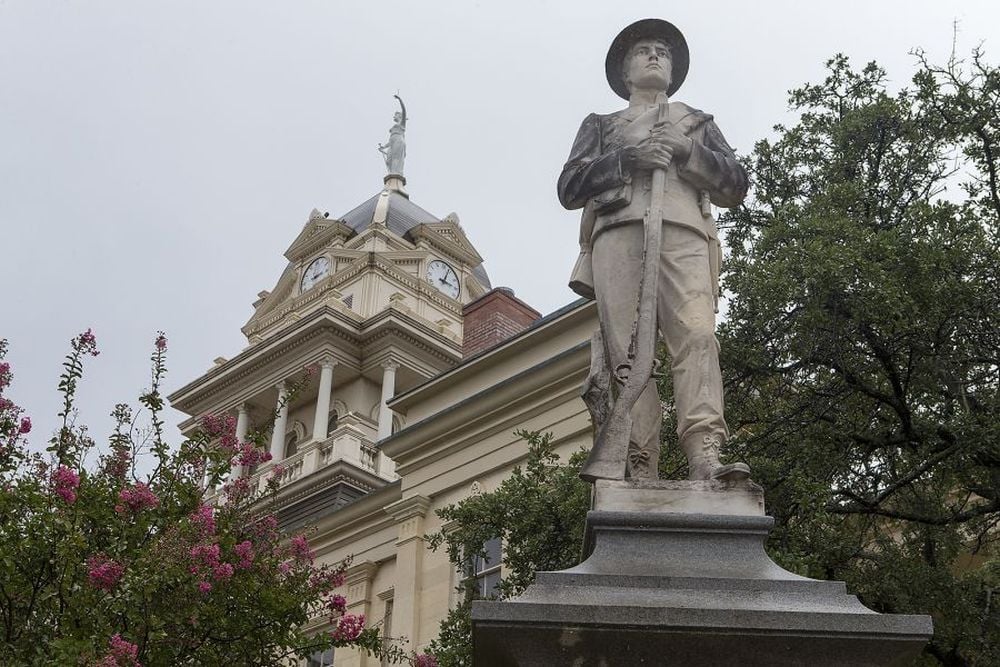 A Confederate soldier statue is shown at the Bell County Courthouse in downtown Belton. 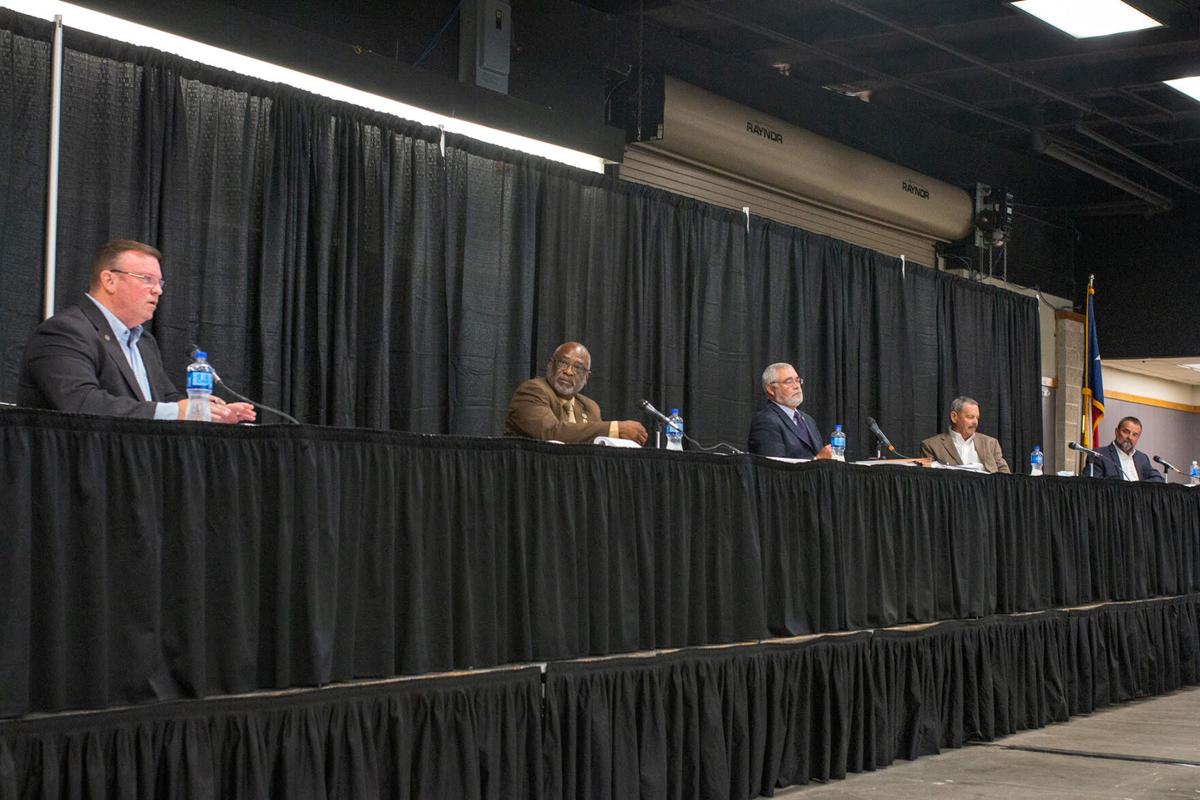 Bell County Commissioners were socially distanced during a meeting on the Confederate statue at the Bell County Expo Center Assembly Hall on Monday. 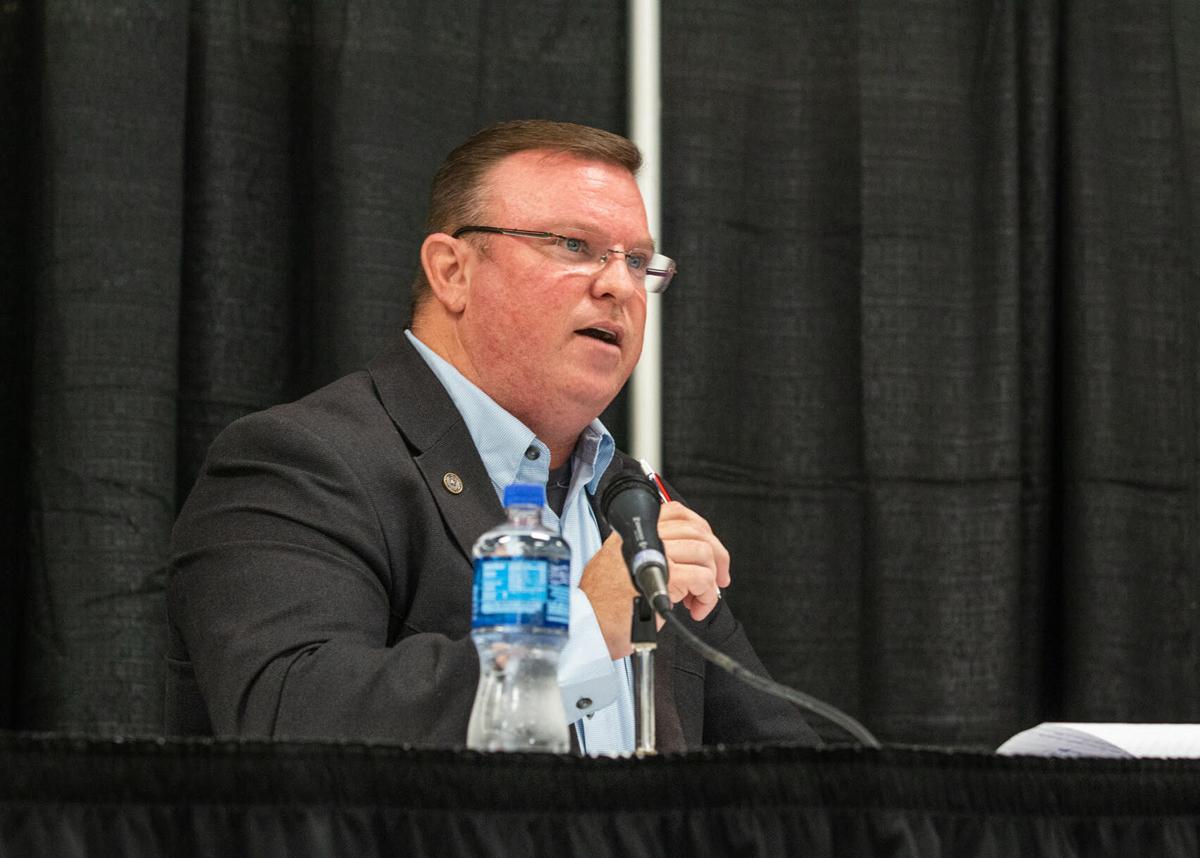 Bobby Whitson, Precinct 2 commissioner, talks during a meeting about the Confederate statue on Monday afternoon. 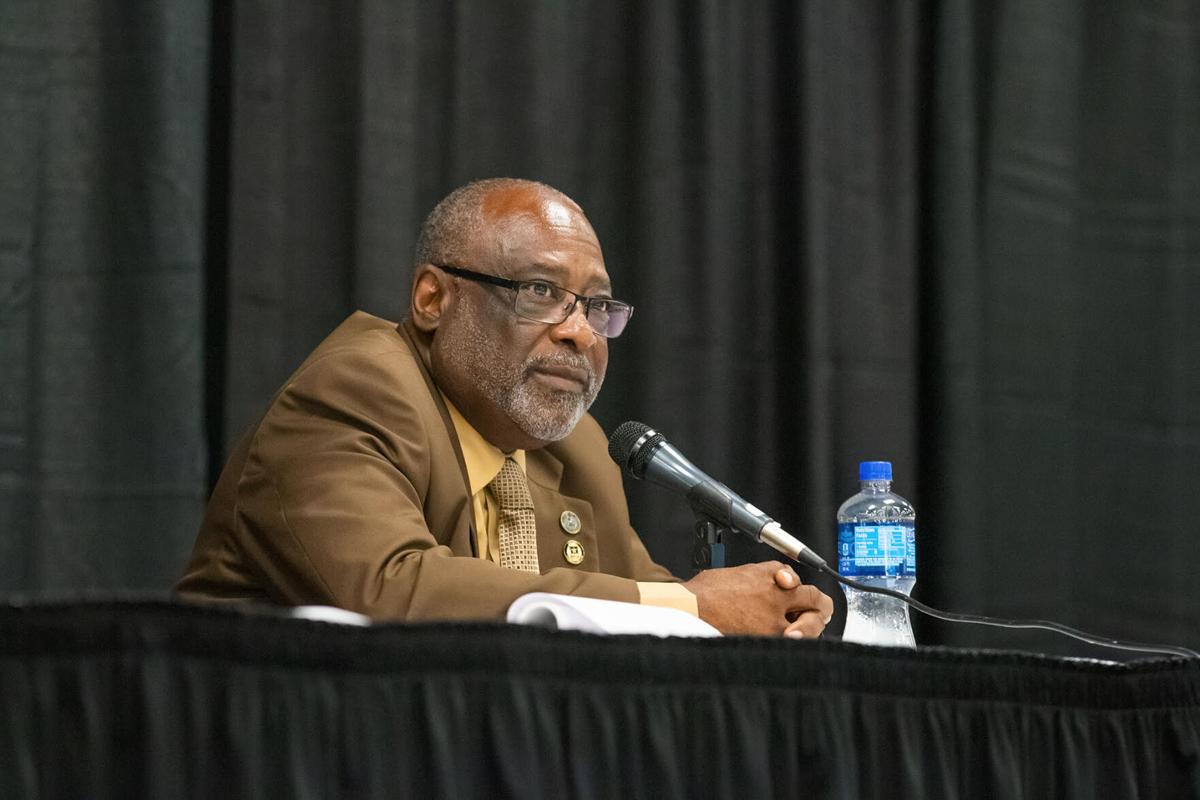 Precinct 4 Commissioner John Driver, the only Democrat on the county’s decision-making body, said the resident-driven discussion on the statue has benefited everyone involved. 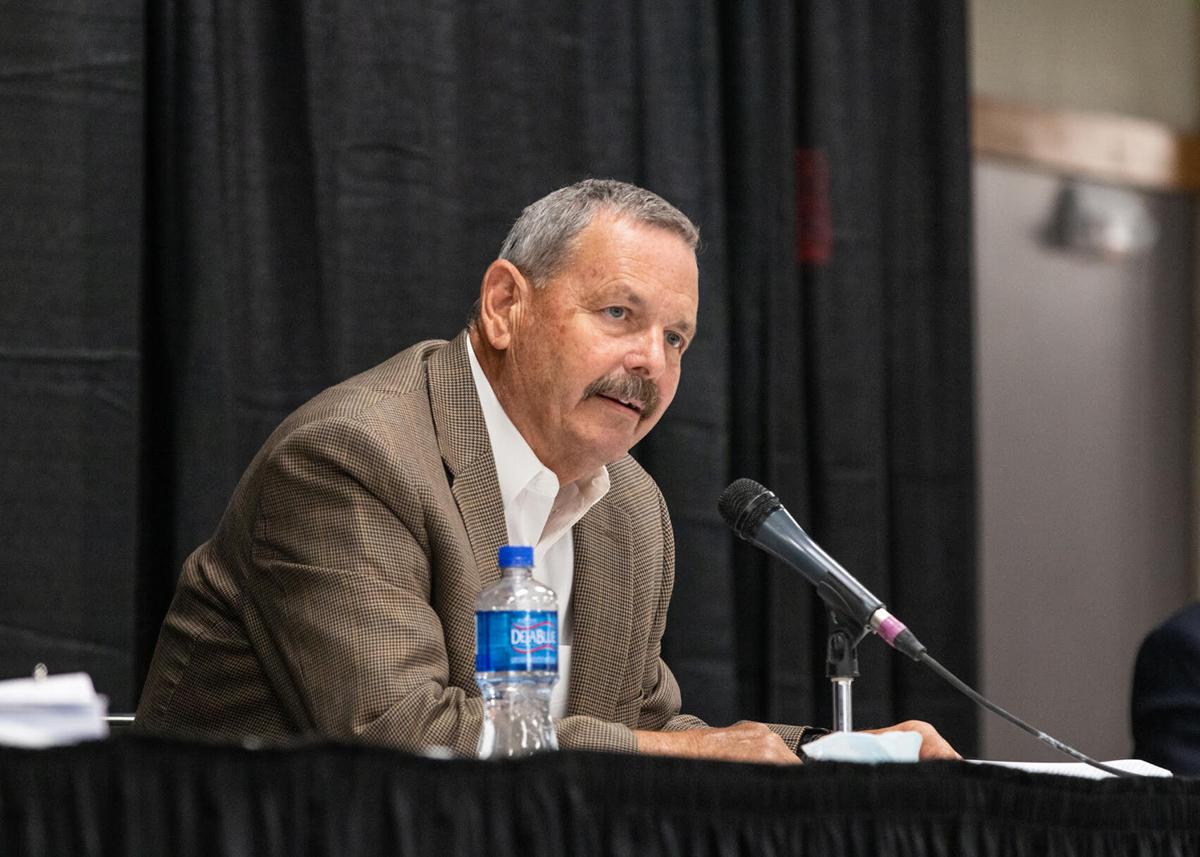 A Confederate soldier statue is shown at the Bell County Courthouse in downtown Belton.

Bell County Commissioners were socially distanced during a meeting on the Confederate statue at the Bell County Expo Center Assembly Hall on Monday.

Bobby Whitson, Precinct 2 commissioner, talks during a meeting about the Confederate statue on Monday afternoon.

Precinct 4 Commissioner John Driver, the only Democrat on the county’s decision-making body, said the resident-driven discussion on the statue has benefited everyone involved.

BELTON — After at least 10 hours of comments from dozens of residents and hundreds of messages in recent weeks about the Confederate soldier statue, the Bell County Commissioners Court on Monday decided to do nothing until a Texas law is changed.

The commissioners discussed the statue, located at the northwest corner of the Bell County Courthouse grounds, and what should happen to it during a Monday afternoon meeting in the Assembly Hall at the Bell County Expo Center, 301 W. Loop 121.

They want to send the issue — which has been bubbling in recent years — to the voters. However, state law currently does not allow them to do that.

Counties under 25,000 people can call for a referendum on what to do about county government-owned property, Commissioner Bill Schumann said. Bell County’s population is nearing 400,000.

“I really do think it is a matter that should be decided by more than three people and three votes,” Bell County Judge David Blackburn said, referring to the majority vote needed to approve any item before the five-member Commissioners Court. “My position is that we need to work on getting this question on the ballot for a countywide election at the earliest possible date. It won’t be this November, and there is still work that needs to be done to get it on the ballot.”

“But I think the people of Bell County deserve the opportunity that was not afforded to them in 1916: The opportunity to give voice where they believe is an appropriate place for this monument,” Blackburn said.

State Rep. Hugh Shine, R-Temple, said Monday afternoon that a few weeks ago he and the county judge discussed the possibility of pursuing a law change.

“I already have a draft,” Shine said, explaining the legislation is currently being reviewed by the Texas Legislative Council, the nonpartisan agency that assists lawmakers in drafting bills.

The earliest the commissioners could call for an election on the statue would be November 2021 — only if that statute is changed during the next legislative session that starts early next year.

Commissioner John Driver, the only Democrat on the county’s decision-making body, said the resident-driven discussion on the statue has benefited everyone involved.

“At this point, I feel we, as a collective unit, will have to make some type of judgment as to how we move forward as to not disrupt the unity in Bell County,” Driver said. “Whatever decision we make going forward has to be a unified decision that meets every citizen of Bell County and it’s a decision everybody can live with.”

The statue is not the only Confederate monument in Belton. The commissioners’ decision to wait until the Legislature amends a law stands in stark contrast to the Belton City Council’s decision to rename Confederate Park.

Although people told the Belton Council to put the park name up to a vote, the city decision makers did not do that. Instead, they unanimously agreed to change the name of the park — which, as the original deed states, was intended only for the use of white people.

Blackburn said the Commissioners Court is not afraid of making a decision.

“We are indeed elected to make decisions. We do it every single week,” he said, bringing up that voters do get to decide some issues, such as a higher tax rate, state constitutional amendments or bonds for schools and cities. “My point is there are times when the law allows — or the law should allow — issues to be decided by voters rather than those elected to represent the voters.”

Some residents who want the statue to remain questioned if the Commissioners Court has the authority to move the monument. Commissioner Bobby Whitson and the county judge emphasized it is under their purview. Commissioners courts are charged with maintaining all county facilities.

“We do have the legal authority to make that decision, one way or the other,” Blackburn said.

“It’s going to be costly to move it,” Whitson said of the 7-foot-tall statue that stands on a marble base.

The city of Dallas spent nearly $400,000 removing the Confederate monument at a park, The Dallas Morning News reported in June.

Among the things the county would have to do, the commissioners said, including getting approval from the Texas Historical Commission because the courthouse is a historic site; hiring architects and engineers; acquiring permits; and getting a crane.

“So $100,000 is not an outrageous number to move that statue,” Schumann, the most senior member of the Commissioners Court, said. “It’s not cheap.”

On top of that, Whitson pointed out the county would still need to find a spot to relocate the statue.

“There is not a suitable location for that statue except for where it is right now,” the Salado area commissioner said, adding that the courthouse’s entire block is a historical monument.

‘We are the problem’

Belton resident Josh Clements, a volunteer with Bell County United for Reform, the group pushing for the relocation, said nothing would change with a referendum because a majority of county voters are white.

“Because of this, they would be able to keep the statue where it is not because it is what is right, but because they hold the voting majority,” said Clements, one of 18 people who spoke during the meeting’s public comments period. “If abolishing slavery or desegregating schools were put to a vote during those times, slavery and segregation would still be occurring in Bell County today.”

Blackburn pushed back on Clements’ claim that white voters would keep the statue simply because of their skin color.

“Implicit in the remark is that the color of my skin determines my vote. I reject that premise. In fact, I consider that premise racist,” the county judge said.

Even if the statue is moved, Whitson said, racism will continue to persist.

Ultimately, Blackburn said the divide between the factions on the Confederate soldier statue issue have to be bridged for the sake of future generations.

Should it stay or be removed? Confederate statue discussion set for Monday afternoon

Will the Confederate soldier statue stay or go? That question may be answered as soon as Monday.