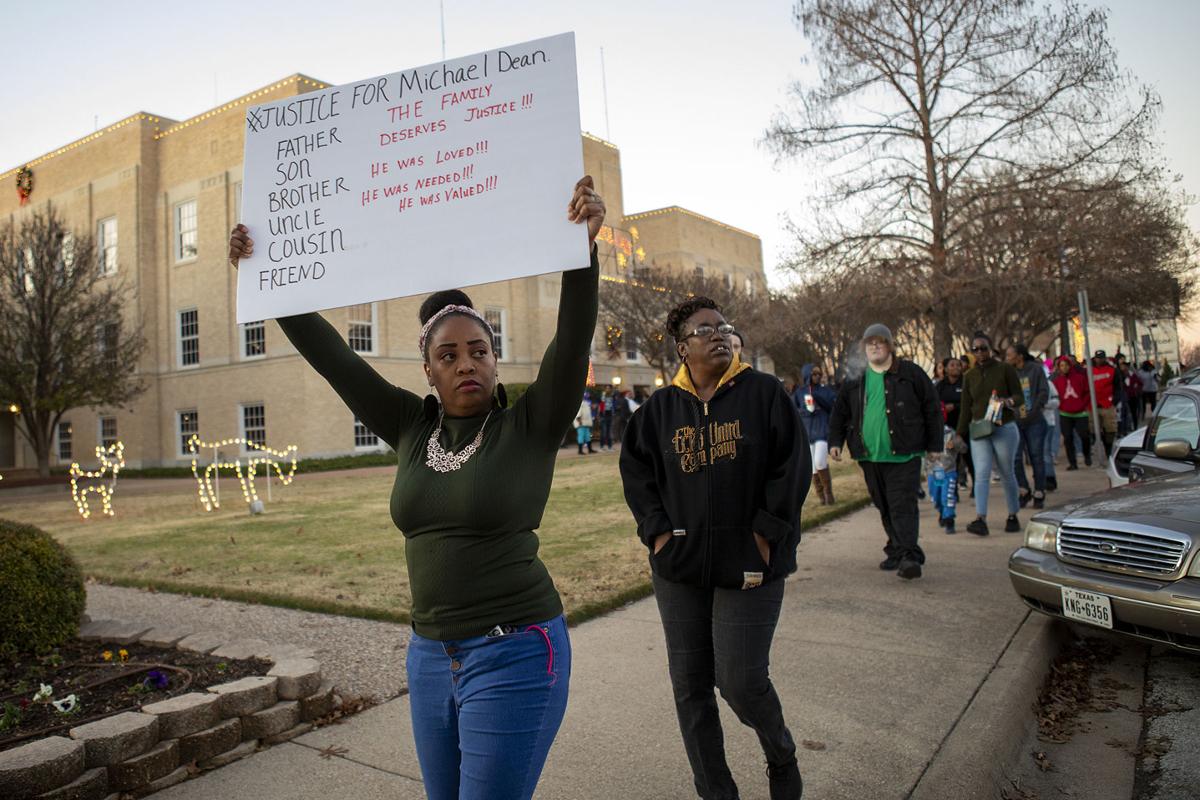 Protesters walk during an NAACP march regarding the death of Michael Dean from Temple City Hall to Temple Police Headquarters on Dec. 11, 2019. 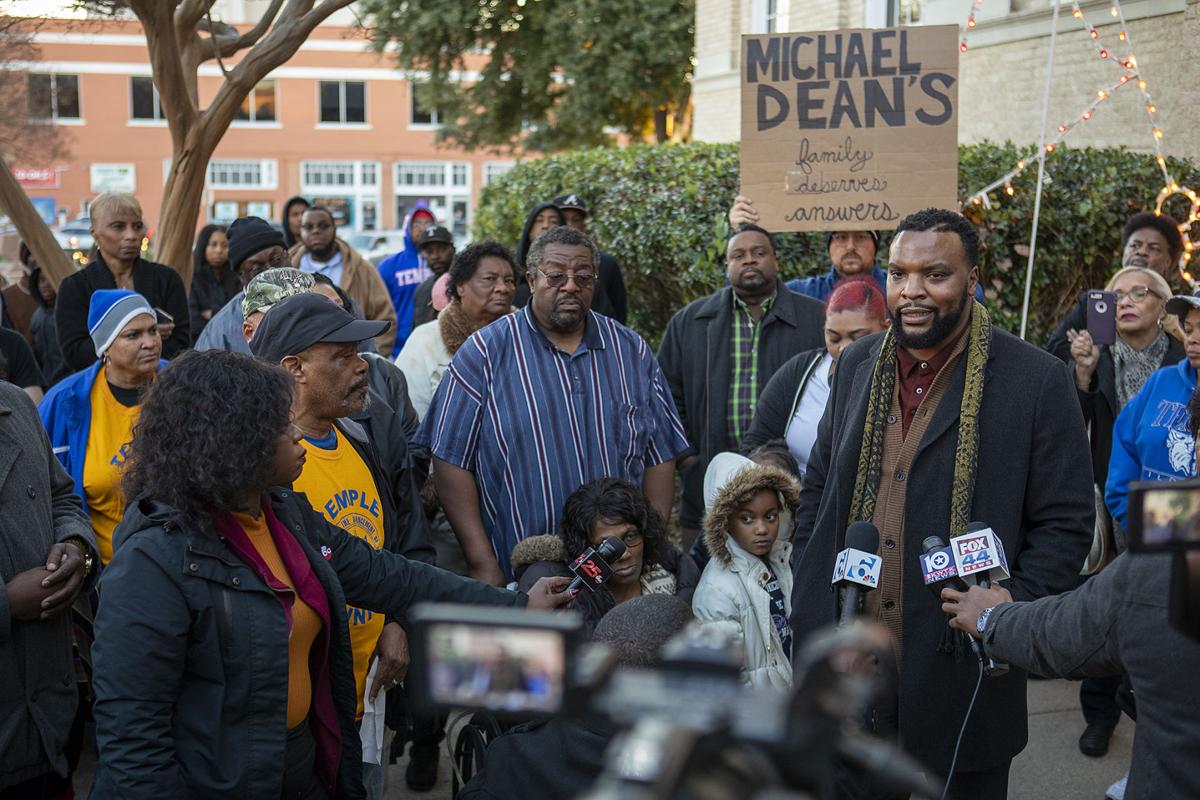 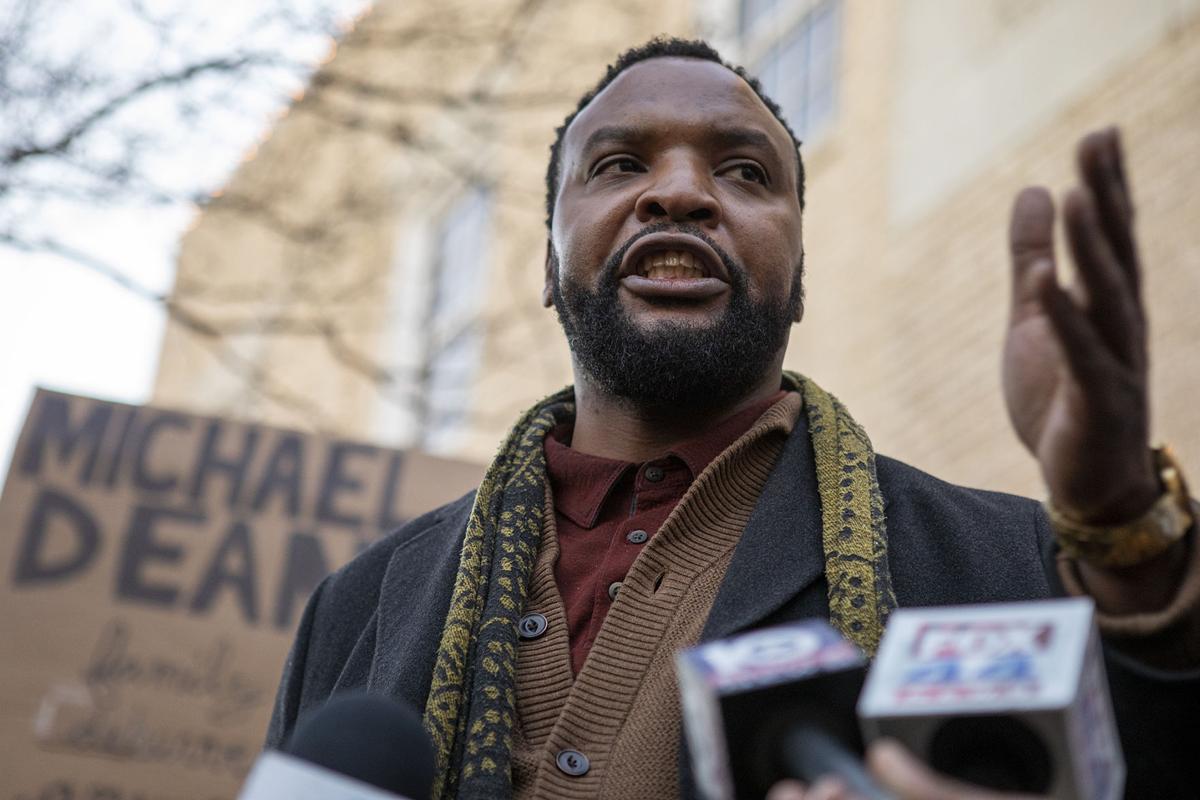 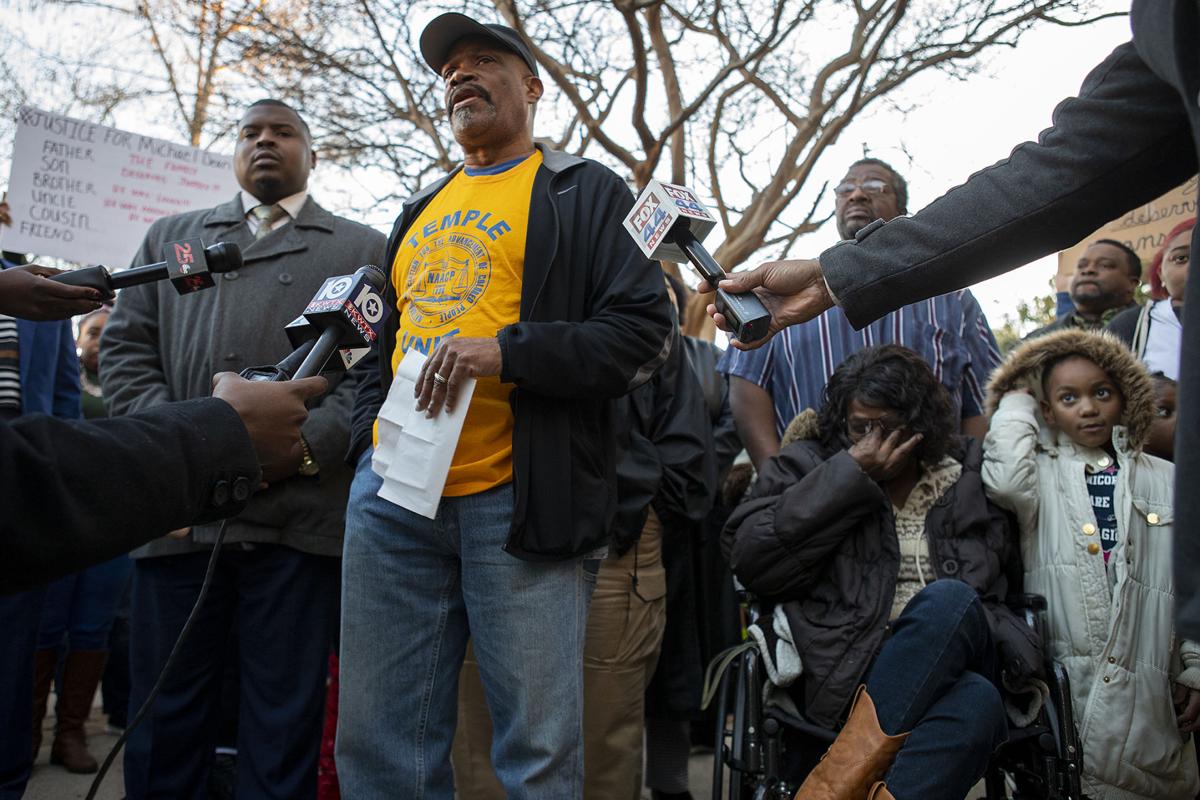 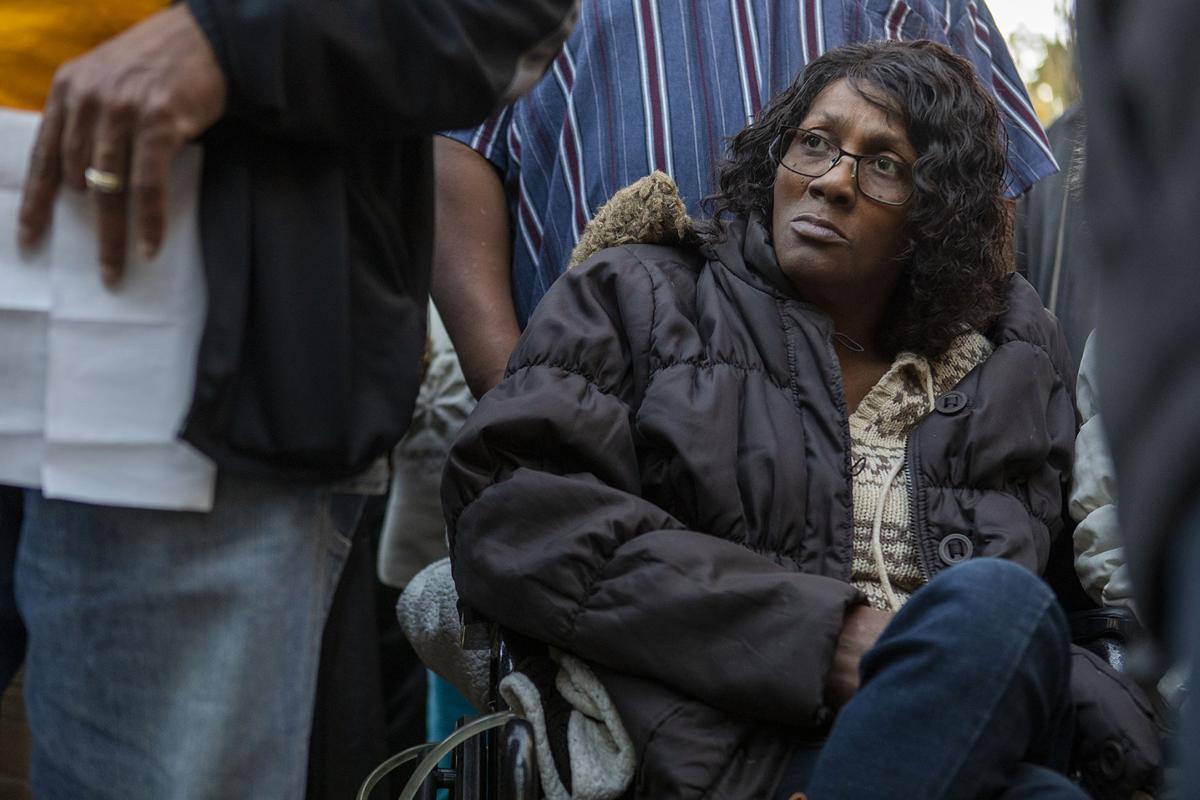 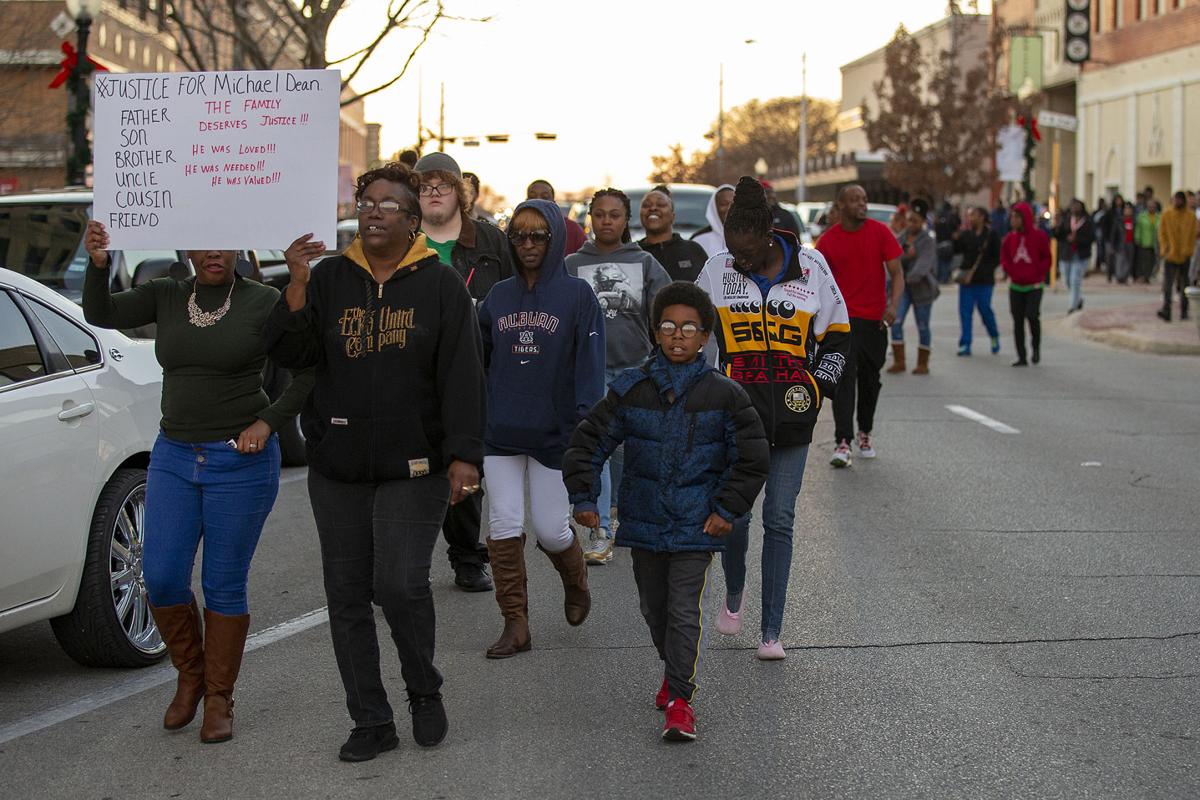 Protesters walk during an NAACP march regarding the death of Michael Dean from Temple City Hall to Temple Police Headquarters on Wednesday, Dec. 11, 2019. Michael Miller/Telegram

Protesters walk during an NAACP march regarding the death of Michael Dean from Temple City Hall to Temple Police Headquarters on Dec. 11, 2019.

Protesters walk during an NAACP march regarding the death of Michael Dean from Temple City Hall to Temple Police Headquarters on Wednesday, Dec. 11, 2019. Michael Miller/Telegram

Lee Merritt, the attorney for Michael Dean’s family, questioned the lack of a narrative in the death of the 28-year-old at a march Wednesday as he seeks answers about the officer-involved shooting.

“That’s absurd and an offense to this community, and it should not be tolerated.”

The Temple branch of the NAACP led a march of about 80 people at 5 p.m. Wednesday outside Temple City Hall in response to a lack of answers surrounding the Dec. 2 shooting of Dean.

Dean was reportedly shot and killed by Temple Police Officer Carmen DeCruz, a nine-year veteran with the department. A preliminary autopsy report attributed a gunshot wound to the head as the cause of death, Bell County Justice of the Peace Ted Duffield said. The report listed the fatality as a homicide.

The preliminary autopsy report has not made its way to the hands of the Temple Police Department, spokesman Cody Weems said.

“As Temple PD is not the lead investigative agency on this case, it is unknown when or if TPD will receive this report,” Weems said. “However, it is reported that Justice of the Peace Ted Duffield has informed members of the media that the preliminary report indicates the cause of death for Michael Dean was homicide.”

Little to no information has been released by Temple Police Department or the Texas Rangers about what led to the shooting or why it occurred — other than it happened during a traffic stop. It is also unclear as to whether Dean was inside or outside the vehicle he drove when he was shot.

Dash-cam and/or body camera video of the shooting does exist from that night, Weems said Wednesday.

During a news conference at City Hall, Merritt called for the Temple Police Department to release the basic information of this case.

“Release the narrative,” Merritt said. “We expect (District Attorney) Henry Garza to just answer the questions … to stop deferring to the Texas Rangers. They don’t run the city and they weren’t elected in this city. Mr. Garza has a responsibility to release that information. Every jurisdiction handles things differently and he has a responsibility to protect the integrity of this investigation, but he expects this community to sit back and know nothing in the meantime.”

Temple NAACP President Bennie Walsh said he waited to address the shooting until an autopsy report pointed to homicide.

“The city has not given us any information,” Walsh said. “I told the city manager and the mayor that I was very disappointed in them that they had not contacted the mother to at least say they were sorry about the incident. The community is in the dark and we do not appreciate this.”

After the Telegram reported how Dean died, Walsh helped organize a community meeting and march Wednesday evening outside City Hall.

Dean’s mother, Christine Dean, wailed out “Justice for Michael!” moments prior to the community’s march to the police department.

After the news conference, the group trekked two blocks from City Hall to the Temple Police Department. Residents walked down Central Avenue, then turned on Fourth Street before arriving at the police department. Many carried signs supporting justice in the case.

Temple resident Vickie Bradley — a teacher assistant at Temple High when Dean was a student there — proudly participated in the march. The 53-year-old detailed how Dean was an outgoing student who seemed to always have a smile on his face.

“He was never troubled or anything because he always had what he wanted and what he needed,” Bradley said.

She voiced her frustration with how long it is taking for information to reach its way to the public.

“It’s too long and absolutely unacceptable, because had he done something wrong it would be all over the news.” Bradley said.

Mary Robertson, 53, a lifelong Temple resident, echoed Bradley’s thoughts. She said she went to the NAACP march to show community support for the Dean family. Robertson questioned why the Temple Police Department hasn’t released more information about the officer-involved shooting.

“I want to hear what happened,” Robertson, a retired beautician, said. “I want them to be as clear in key terms as possible.”

DeCruz also was named in 2017 in a police brutality lawsuit that was later dismissed in federal court. He and another other officer, Bret McCune, were not disciplined by the department as their actions reportedly did not show intent.

Court documents claimed McCune intentionally ran over a juvenile who was a suspect in a home invasion, but the case was dismissed Oct. 1, 2018.

A preliminary autopsy report received Tuesday said 28-year-old Michael Lorenzo Dean of Temple died Dec. 2 as the result of homicide after he w…

The Temple Police officer who shot 28-year-old Michael Dean on Dec. 2 was named in 2017 in a police brutality lawsuit that was eventually dismissed.

Michael Dean is shown with his daughter Te’yanna, who turned 6 years old the day he was killed after being stopped by a Temple Police officer.