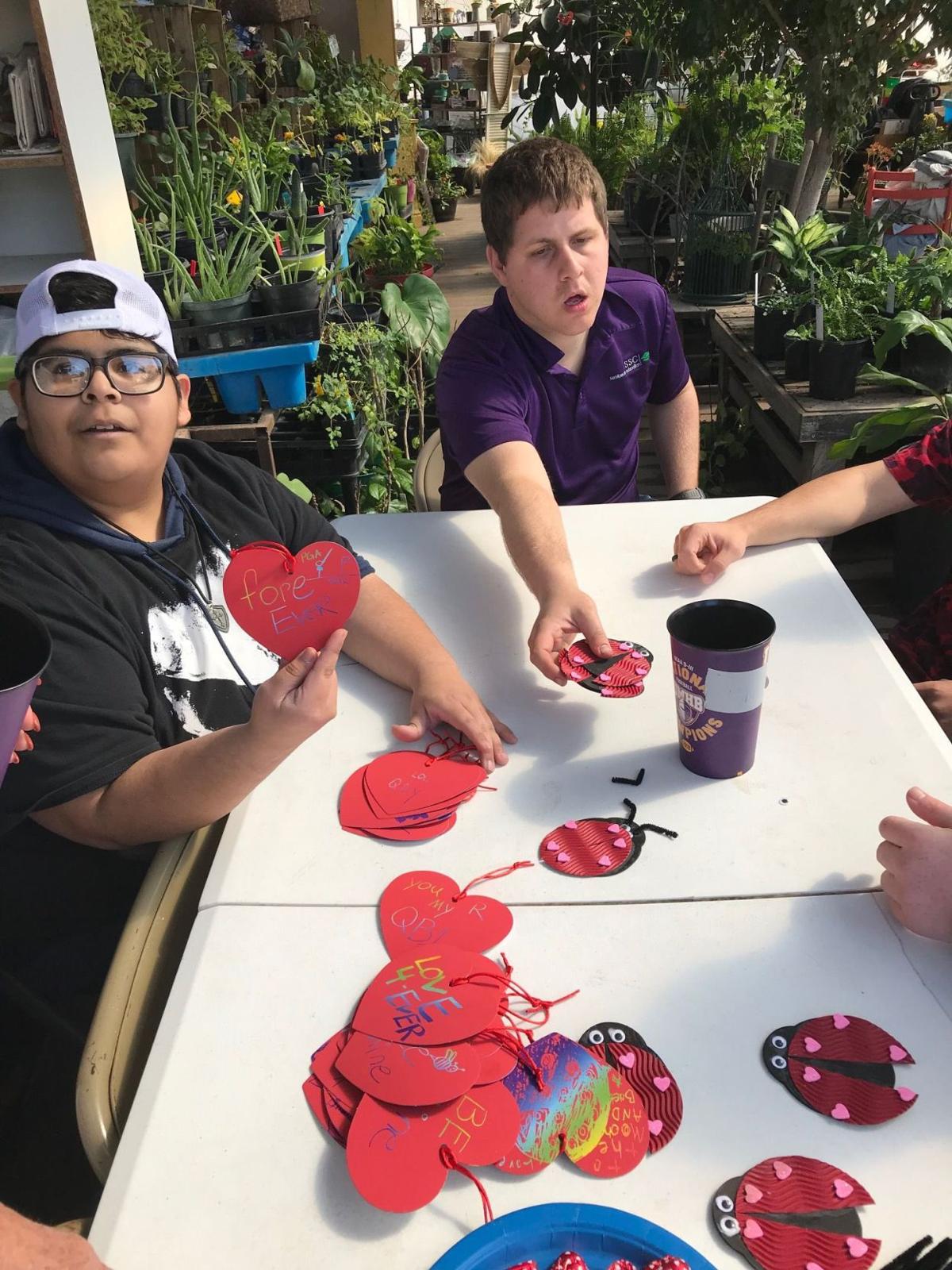 On Friday, Izzy Lauria, left, and Logan Marek along with other trainees work on Valentines for the businesses that support Eldred’s Nursery Foundation. 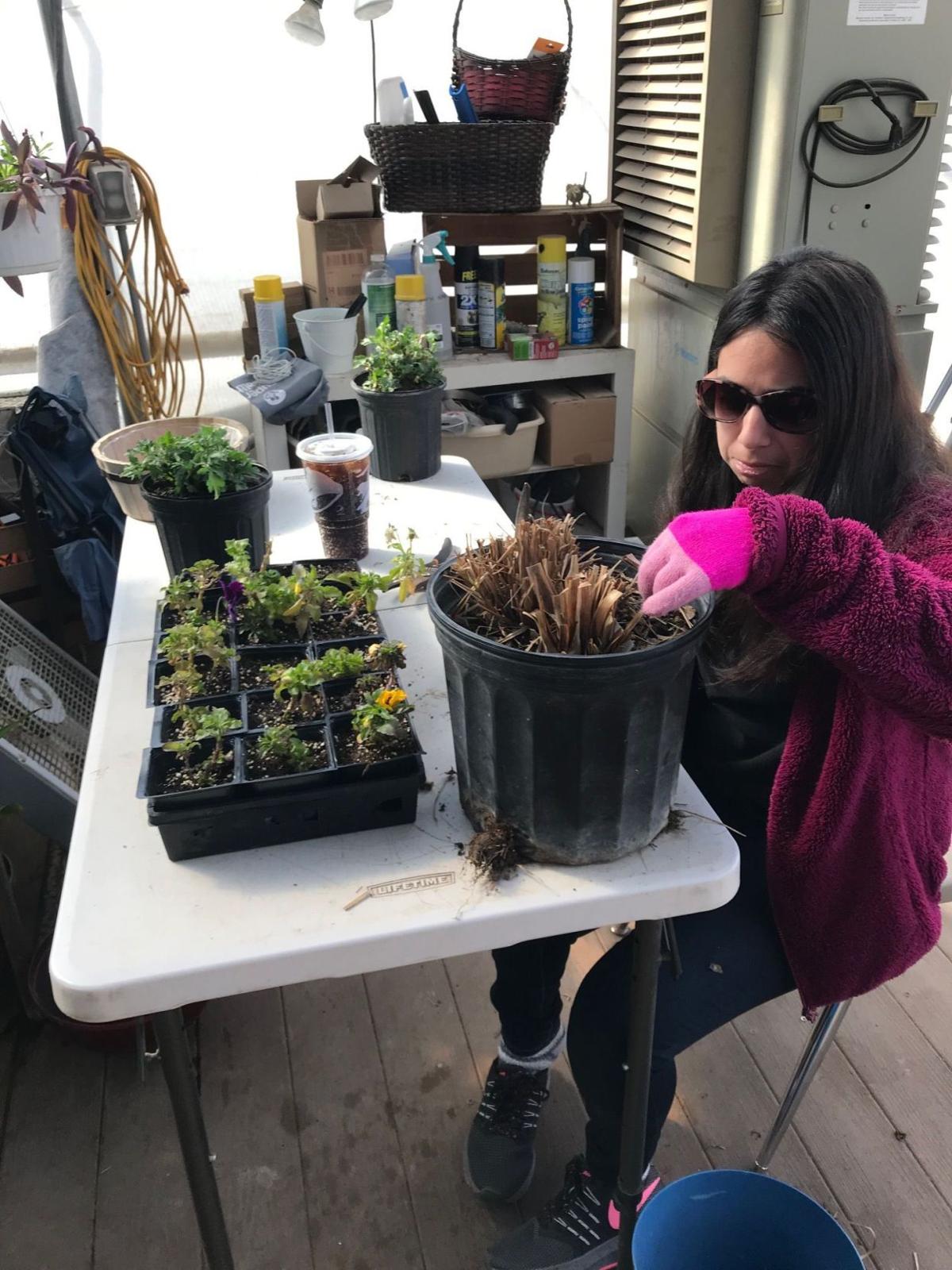 Pryscelda Mendoza, a trainee at Eldred’s Nursery in Belton, trims back leaves on pansies that were damaged by the recent cold weather.

On Friday, Izzy Lauria, left, and Logan Marek along with other trainees work on Valentines for the businesses that support Eldred’s Nursery Foundation.

Pryscelda Mendoza, a trainee at Eldred’s Nursery in Belton, trims back leaves on pansies that were damaged by the recent cold weather.

BELTON — Early last week, Logan Marek and Beth Kahler were sitting at a table in the back of Eldred’s Nursery in Belton cutting up potatoes that would be dried and then sold to customers who want to grow their own potatoes.

Eldred’s Nursery Foundation exists to help young adults with special needs who have graduated from high school, but need to learn some skills before they can join the workforce.

On Thursday, Pryscelda Mendoza, 24, was seated at a table at the back where she was trimming away the leaves of pansies that received some damage from the snow. Next to the pansies was a pot planted with a native grass. The leaves had been cut back because the grass had gone dormant as soon as the temperatures started to drop.

On Friday, there were several trainees at Eldred’s to celebrate trainees with January birthdays.

Candice Waugh, Pryscelda’s mother, said her daughter has participated in the Eldred’s Nursery Foundation training program from the start.

Pryscelda has younger siblings who go off to work each day and she has wondered why she can’t do the same.

“I’m not sure Pryscelda will ever have a job, but the skills she has learned while at Eldred’s give her hope that someday she could potentially work and earn money,” Waugh said.

The program keeps her motivated, her mother said. When Pryscelda first got out of school there was nothing for her to do. She did participate in Break Through Central, a program offered by Central Counties Services, before the program’s funding was cut.

“With nothing to do, she became depressed,” Waugh said.

As a trainee at Eldred’s Nursery, Pryscelda likes to keep other trainees on task.

“She loves that, she wants to be boss,” Waugh said. “It gives her confidence, knowing she’s needed and her work is important.”

Pryscelda’s dream job is to be a Walmart greeter, her mother said.

“She liked the idea of saying hi to everyone,” Waugh said. “She’s never met a stranger.”

The work at Eldred’s fulfills the greeter ambition without the risk, she said.

Eldred’s Nursery Foundation got its start in January 2017 when Rob and Margaret Chadwick decided to purchase the Belton nursery.

Margaret Chadwick had set up the 18 Plus program at Belton High, which provides further training for special needs students who have completed high school, but need assistance in transitioning out of school and into the workforce when possible.

“I recognized there wasn’t anything in place to train these students to get a job,” she said.

Bourland Landscaping Supplies owned the nursery when the Chadwicks began taking care of the plants, handling the watering, weeding and anything else that cropped up.

Trey Galloway purchased the landscape business, but wasn’t interested in the nursery and the Chadwicks talked to him about contracting with the school district to have students come and take care of the plants.

Galloway wanted the Chadwicks to purchase the nursery, which they did. They still pay rent to Galloway who owns the property.

The nursery’s mission is to provide job training for individuals with disabilities, specifically students leaving high school. The nonprofit was set up as a training site and the ultimate goal is for the nursery to make enough money to pay for a couple staff members other than the Chadwicks, who take no pay and are working full time in spite of being retired.

Jumping off a cliff is how Margaret Chadwick describes deciding to own and manage a garden nursery.

The couple had to learn who to purchase plants from and what grows in the gardening region Zone 8 that includes Bell County.

“We had to figure out the down time during the winter months,” she said.

Currently, there are 25 trainees who are coming through the nursery.

“We’re not training for nursery jobs, we’re working on job skills,” she said. “We’re working on listening to your boss and not spending all day in the bathroom. There are many things that go into job skills development.”

Each trainee is expected to eventually spend four hours working with an hour off for lunch and break.

One of the skills taught is communication.

“If you’re on a lunch break at your work site and someone comes and sits at the same table, they are going to expect a conversation,” Margaret Chadwick said. “We eat lunch together and talk about what we’re learning.”

Jill Read said her son, Preston Read, has been a trainee at Eldred’s Nursery since the program started more than three years ago. He has benefited from the socialization he gets at the nursery.

“He loves coming here,” she said. “He gets to interact with peers and customers, he has responsibilities and it’s time away from us.”

Preston is at Eldred’s three or four times a week. He waters the plants and has a special interest in caring for the trees.

Sue Ham visited the nursery on a particularly hectic Saturday.

“It was very busy and I thought maybe I could help out,” Ham said.

Ham returns a couple of times a week to volunteer.

Margaret Chadwick’s affinity for people who were different from her was learned at an early age from her father’s example.

He was a minister and everyone was welcome in the church, she said. Those with disabilities, cognitive or physical, were encouraged to attend Sunday school with their age group.

“I am a firm believer that all individuals need to be part of the community and the community needs to engage and absorb those with differences into our lives,” Chadwick said. “I believe people need a purpose for getting up in the morning and this is one of the options.”

Eldred’s Nursery Foundation is holding a Wine Pairing and Silent Auction for its Winter Capital Fundraiser.