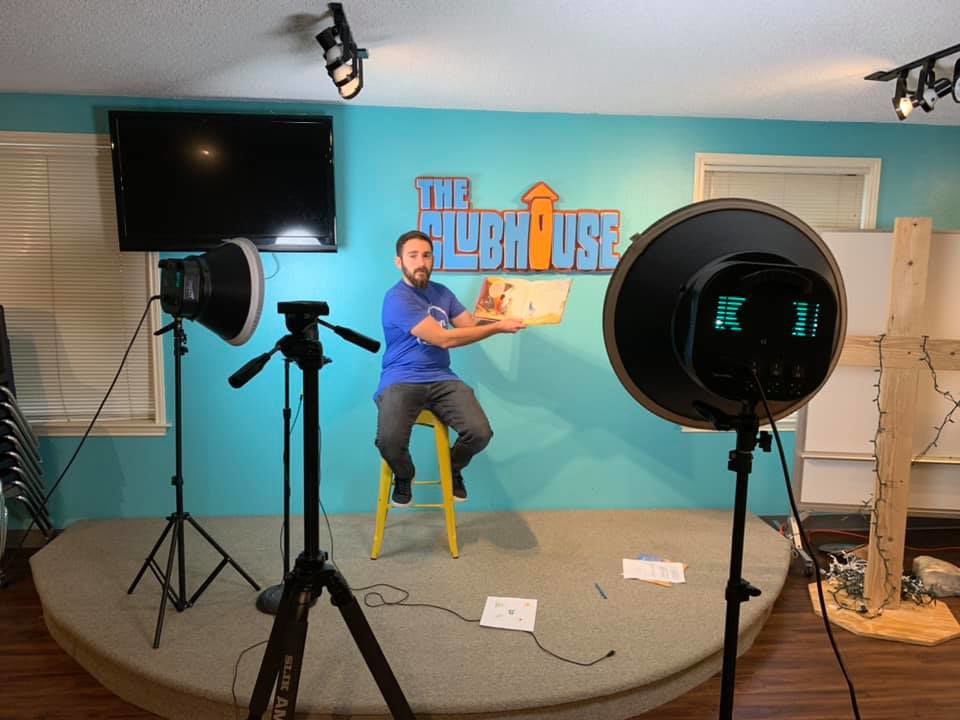 Vince Nieves, Children and Family Minister at Belton Church of Christ, records a children’s worship program for a streaming service this Sunday. 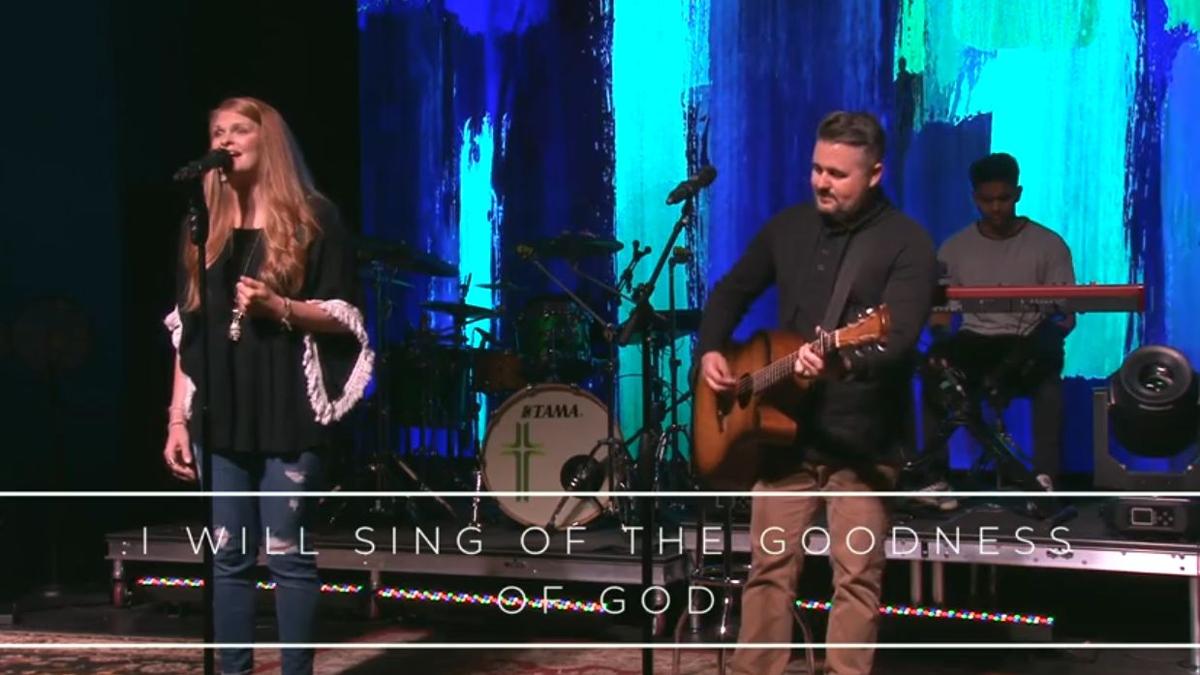 In this image captured from a streaming service at First Baptist Church in Temple, Jeremy and Rachel Boeselt perform as lyrics to the song are displayed on the screen.

Vince Nieves, Children and Family Minister at Belton Church of Christ, records a children’s worship program for a streaming service this Sunday.

In this image captured from a streaming service at First Baptist Church in Temple, Jeremy and Rachel Boeselt perform as lyrics to the song are displayed on the screen.

A church without a congregation is just another empty building. But while members of the church body might be cooped up at home, it hasn’t stopped them from worshiping – though, leaders and pastors have had to make adjustments for their lack of a physical audience.

At first, the changes began with simple things, like encouraging hand washing and discouraging physical contact – hard to do when hugs and handshakes are as common as prayers in church. But as the situation developed and began to hit closer to home, church leaders began making the difficult decision to cancel services for at least a few weeks.

While most churches have suspended public worship services for the time being, their digital communities are flourishing.

Andy Davis, senior pastor at First Baptist Church in Belton, said his church made the decision at 11:45 a.m. last Friday not to meet the following Sunday.

“We’re not a live stream church or anything; we’ve not been doing that so we really had to scramble, but we got it all put together,” he said.

Davis said they did a live broadcast Sunday morning and recorded it so the video could be posted on Facebook, Vimeo and the church website for folks to watch later. He said they recorded this week’s worship service Thursday afternoon, and it would be ready to put online by 8:30 a.m. Sunday.

“People can worship at 8:30 or they can sleep late and worship at 11:00 or do whatever they want to do – it’ll be on there,” he said. “They’ll be able to see it whatever time they want to look at it and get their family together. Technology is amazing and I’m thankful for it because I can’t imagine in the old days what we would have done at this point in time.”

Ritchie Hamm, preaching minister at Belton Church of Christ, said making the digital switch has “been a learning curve for us,” but the staff is working to push out new content. The youth and children’s ministers have been recording lessons and online Bible classes and making materials available for students and parents.

“It’s going to be a recorded worship, but we videoed everything just like it was here – from the welcome to a communion talk to the sermon,” Hamm said. “And our praise team last night came up and actually sang about three sets.”

Jon Stroker, executive pastor at Vista Community Church in Temple, said several churches in the area, including Vista, Temple Bible Church, First Baptist Churches in Temple and Belton and Bethel Church, are working together to make decisions and share information.

“After Hurricane Harvey we realized just how beneficial it could be if we all work together just to have a strategic impact on our community,” Stroker said. “And so we pledged to stay in contact anytime something happened, and we’ve been staying in contact since then.”

He said the main leaders for each church have been working around syncing communication and trying to announce service cancelations at the same time using the same language.

Stroker said this weekend they will be collectively starting a campaign to “be a good neighbor” by asking community members to make an intentional move to leave a card at their neighbor’s house, introducing themselves and offering to do anything they can to help.

“Because we really believe if everyone will take care of their neighbor, then everyone is taken care of,” he said. “And that’s a message we want all of our churches communicating this weekend, so working together on stuff like that has been really helpful.”

Stroker said Vista is actively promoting two service opportunities at Helping Hands Food Pantry in Belton and Love of Christ Food Pantry in Temple. He said both have had to drastically shift operations based on CDC requirements and recommendations. Helping Hands has moved to a deliver model to serve 600-800 families a week, and Love of Christ has turned to a drive-thru method to serve 200-400 families per week.

“So there’s a thousand families that need to be helped with food every single week, and they’re having to do it in a way they’ve never done it before,” he said.

The church is asking people to sign up as delivery drivers with Helping Hands and volunteers to pre-package meals and distribute them at Love of Christ. Job descriptions and signups are online at thevista.tv/help.

In addition to live streaming worship services, Vista’s kid’s ministry has been trying to help parents at home by issuing a family challenge every day at 10 a.m.

“We ask them to compete, do the challenge, take a picture of it, then the next day the winning family will have pizza delivered to their house that night for a big celebration,” Stroker said.

Challenges so far have included building a blanket fort, a rock painting competition and a fashion show. He said they are also working on an online family worship experience geared toward the kids. Stroker said the student ministry is putting out a 30 minute show every Wednesday and the college ministry is also doing weekly teachings online.

Gary White, lead pastor at Foundation United Methodist Church in Temple, has been releasing daily devotionals on YouTube beginning Monday, and said he will continue to do so as long as needed. He said most of the content is about how we can tangibly make a difference during this time.

“First of all we’ve just enforced to our people the importance of self-care,” White said. “As tedious as it might seem, this is an opportunity for us to have some sabbatical, to have a Sabbath, to have some rest – to be able to focus on the important things without distraction or interruption.”

He said this is also an opportunity for people to check in with each other, and the church has tried using the “gift of modern technology” to help with that by encouraging members to use social media for updates and messages and the church directory to reach out and check on each other.

He said they are also doing what Mister Rogers said and encouraging people to look for the helpers.

“In order for us to truly be helpers I think we have to search out the needs and figure out what the needs are,” White said. “So we’ve opened up our phone lines, opened up our social media to really encourage our people to be looking for needs.”

The Diocese of Austin began asking parishes to make modifications nearly two weeks ago due to the coronavirus threat, including removing holy water, placing the Eucharist in the hand, and discontinuing the distribution of the Precious Blood at Mass. Parishioners were also encouraged to forgo holding hands during prayer and substituting a bow in place of a handshake for the Sign of Peace to prevent the spread of COVID-19 as well as the flu.

On Tuesday, the Most Rev. Joe S. Vasquez, Bishop of Austin, issued a letter and decree notifying everyone that public Mass has been suspended.

Christian Gonzalez, diocesan director of communications, said in the meantime people are encouraged to watch Mass on the internet or on television or listen to it on the radio.

“There is a particular prayer called a Spiritual Communion that when you’re not able to make it to Mass or to receive the Eucharist, this traditional prayer has been said for hundreds of years,” he said. “Bishop actually encourages everyone to say that prayer every day now.”

While public Mass has been suspended, priests will continue to offer daily Masses privately.

“The priest has to say Mass every day, and the priests are going to continue to do that no matter what,” Gonzalez said. “The priest may celebrate that with just a small number of ministers, certainly abiding by whatever crowd restrictions there are, so unfortunately the general public or parishioners can’t really join in that Mass. It’s just something that the priest does and celebrates, but Mass does continue – Mass is not stopping.”

Gonzalez said, for now, public Mass is suspended through the Wednesday of Holy Week (April 8). The Diocese will reevaluate and announce either on that date or before if the suspension will be lifted or continue.

He said parishes are also asked to step up social and digital media presence so there are resources to keep the community going.

In his decree, Vasquez stated, “As I share in the hopes, griefs, and anxieties of the Christian faithful during this uncertain time, I ask that we continue to pray for the strength to persevere by God’s grace, remembering to keep our eyes fixed on the Lord.”

Messages of encouragement are a common theme from local pastors.

Hamm shared a short message from his upcoming Sunday sermon about encouragement during storm.

“Storms don’t last forever,” he said. “So we just need to stay the course and continue to trust in God and we’ll get through this.”

White said he believes we serve a God of abundance, and God has given us gifts in abundance.

“And if we pool those gifts together and we pull together in a strong way, I think this is really an opportunity for us, not only as a church but as a community, to show what we’re made of,” he said.

“I think what we’re trying to remind everybody is that during an uncertain time, that God is certain and he’s just as here now as he’s ever been,” Stroker said. “And sometimes in moments like this when we’re able to slow down and reflect it really helps us reevaluate priorities and figure out just how important having good community around us really is.”

In Salado, the leadership of Cedar Valley Baptist Church has made the decision to postpone services.

“We feel God expects us to use wisdom and discernment in situations such as this,” Linda Jackson, church secretary, said in a news release. “We are sad to not get to meet with everyone weekly, but we can lift our Lord up in prayer, and each other. We can worship at home during this serious time. God understands and is in control.”

Cooper Ross records Bruce Beaver, Youth and Family Minister, this week on stage at the Belton Church of Christ for online video ministry that …