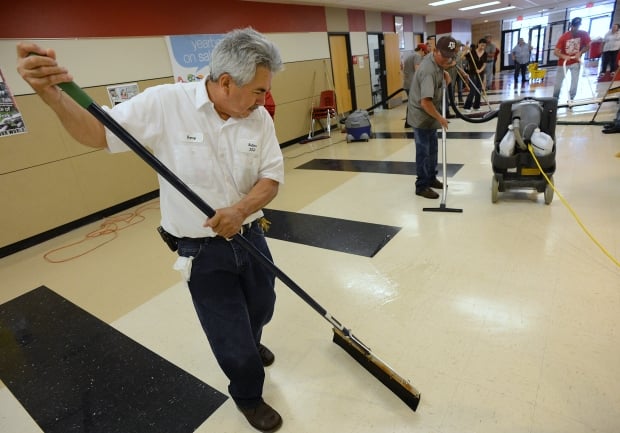 Belton Independent School District and Belton High School maintenance workers clean up the cafeteria after a floor drain backed up causing flooding in the high school. 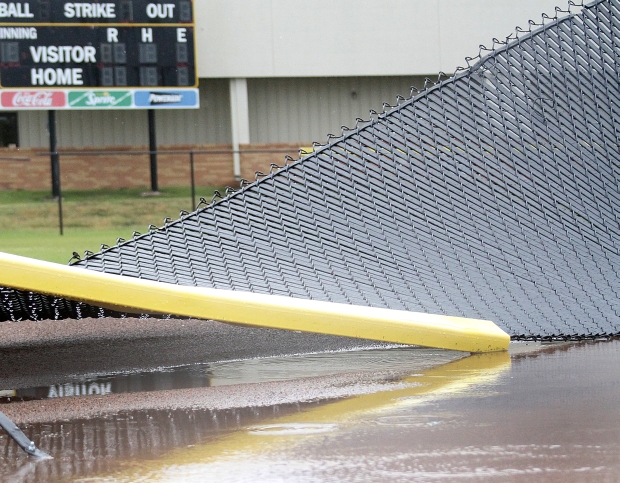 A Temple College softball field fence was blown into the middle of the infield after heavy winds and rain hit Temple.

Belton Independent School District and Belton High School maintenance workers clean up the cafeteria after a floor drain backed up causing flooding in the high school.

A Temple College softball field fence was blown into the middle of the infield after heavy winds and rain hit Temple.

TROY — What is usually a quiet afternoon in Bell County took a turn Thursday when Mother Nature woke many residents from their naps with claps of thunder, lightning bolts and hail on Thursday.

The Belfalls area east of Troy took the brunt of the storm. Homes were damaged, barns were leveled, trees toppled and power lines were downed.

Dennis Baker, coordinator of the Bell County Office of Emergency Management, said that high winds, estimated at 70 mph, contributed to the damage. He said this was at the intersection of FM 438 and FM 935. Bell County road and bridge workers were at the site to clear the road and block unsafe roads.

Baker said he thought it was a straight-line storm and not a tornado because of the pattern of the fallen debris.

Glenn and Shannon Willis found themselves in the middle of the debris after high winds and hail shredded their barn roof, blew out doors, split trees in half and rearranged their farm. A swingset was gone, along with an above-ground pool and trampoline, some of which were set in cement and rebar.

Shannon normally would have been at her job at the Scott & White cancer center, but she was at home Thursday because her daughter was sick. She said she was totally taken back by the intensity of the storm, which caused the windows of her home to shift, drawing the rain into the house. She said she called her husband, a contractor, who was working on a demolition project.

Glenn Willis said he thinks that it was a tornado that hit because the debris from the storm was scattered in a circular fashion for many acres around his farm.

Shannon Willis’ parents live up the road. A barn on that property no longer stands. Holes in her parents’ roof measured up to 8 feet in diameter were visible.

The community showed up in force to put tarps over roofs and cover or temporarily help the family recover.

Many area residents may be without electricity for a day or two because seven major feeder lines were down at one point, Oncor spokesman Willi…